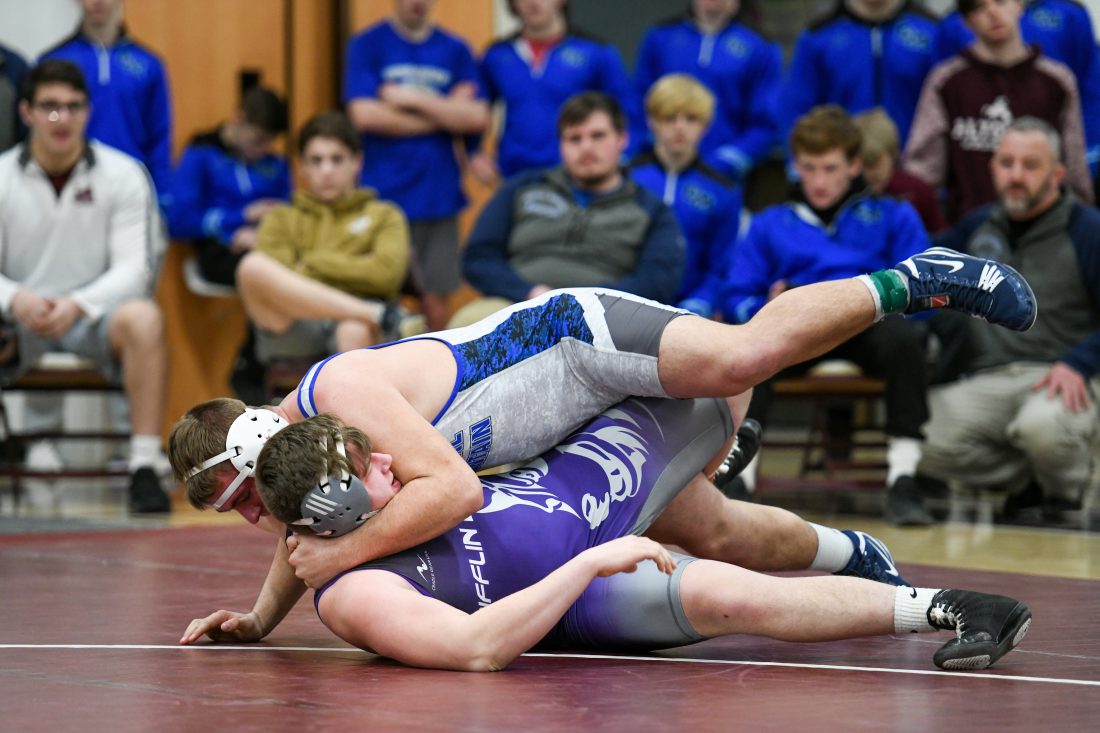 MILL HALL- If you walk into the Central Mountain High School matroom prior to practice, you’ll observe the wrestlers engaged in an intense but friendly dodgeball competition. The grapplers utilize the game as a pre-workout exercise as they await the arrival of a few teammates who commute from Bucktail High School.

“We’re having fun right now,” Central Mountain coach Biff Walizer said. “As the saying goes ‘the hay is in the barn.’ They’ve done the work. They’ve put in the time, they’re conditioning is where it needs to be, so it’s just a matter of them staying fresh and getting ready for this event they having coming up this week.”

“If you had asked me beforehand how many we expected to get through, I’m not sure if we would’ve gone that high,” Walizer said. “We had a few guys wrestle above their seeds.

“Paul Risley went into the District Tournament with three wins, and pretty much doubled his season-wins in one day. Performances like that were nice to see with the guys who have been working hard and putting in a lot of time. To see them be able to keep their season alive, and make it to Regionals, was good.”

The Wildcats claimed two gold-medalists in the evening in Derek Keen at 113 pounds and Gage Sutliff at 220.

Keen was a state-qualifier last season as a freshman and is replicating that success in his sophomore campaign. He won districts with a pin versus Bellefonte’s Aidan O’Shea.

“It feels good being a District Champion,” Keen said. “I was confident going into the championship match because I wrestled that kid growing up. I had him in a front-headlock and I saw his leg there. So I just reached across, grabbed it, locked up for the cradle and that was it.”

Keen’s heroics earned him a first-round bye on Saturday as he’ll wrestle in the quarterfinals against the Josh Letko (Warren) versus Khalil Collins (Obama Academy) winner. Keen is prepared for either opponent and trusts that the coaching staff’s guidance will propel him to another successful outing.

“I just gotta do what the coaches tell me to do and wrestle hard,” Keen explained. “I gotta be smart in my matches and not do anything risky, I guess.”

Gage Sutliff was Central Mountain’s second-gold medalist. The 220-pounder avenged his two previous defeats against Mifflin County’s Hayden Crum with a second-round pin against Crum in the District Final.

“It’s incredible,” Sutliff said on being a District Champion. “It’s something you dream about. It was crazy and I couldn’t have done it without Biff and coach Buckwalter being there in my corner.”

Sutliff opens the Regional Tournament Saturday with a first-round bout against Williamsport’s Charlie Lundy. Sutliff has no prior experience facing Lundy, but he’s seen the Millionaire in live-action.

“I’ve seen him wrestle before and I should be alright,” Sutliff said.

Sutliff and Keen comprise just two of the 12 Central Mountain wrestlers who were fortunate enough to reach Regionals. But with tougher competition, and a narrower path to States, given just the top-three place winners advance to Hershey, the Wildcats face a difficult trail ahead.

“The farther you go in the postseason the tougher things get,” Walizer said. “There’s certainly going to be some tough matches this weekend in Altoona.”

Central Mountain carried 12 wrestlers from Districts into this weekend’s tournament. They don’t expect every athlete to travel to Chocolate Town, but they’re focused on sending as many wrestlers there as possible.

“I think everybody’s expectation and goal is to get a spot in that state bracket,” Walizer said. “At this point it doesn’t matter if it’s first, second or third. You just gotta get your name in the state bracket and that gives you a chance to move on and get a medal.”