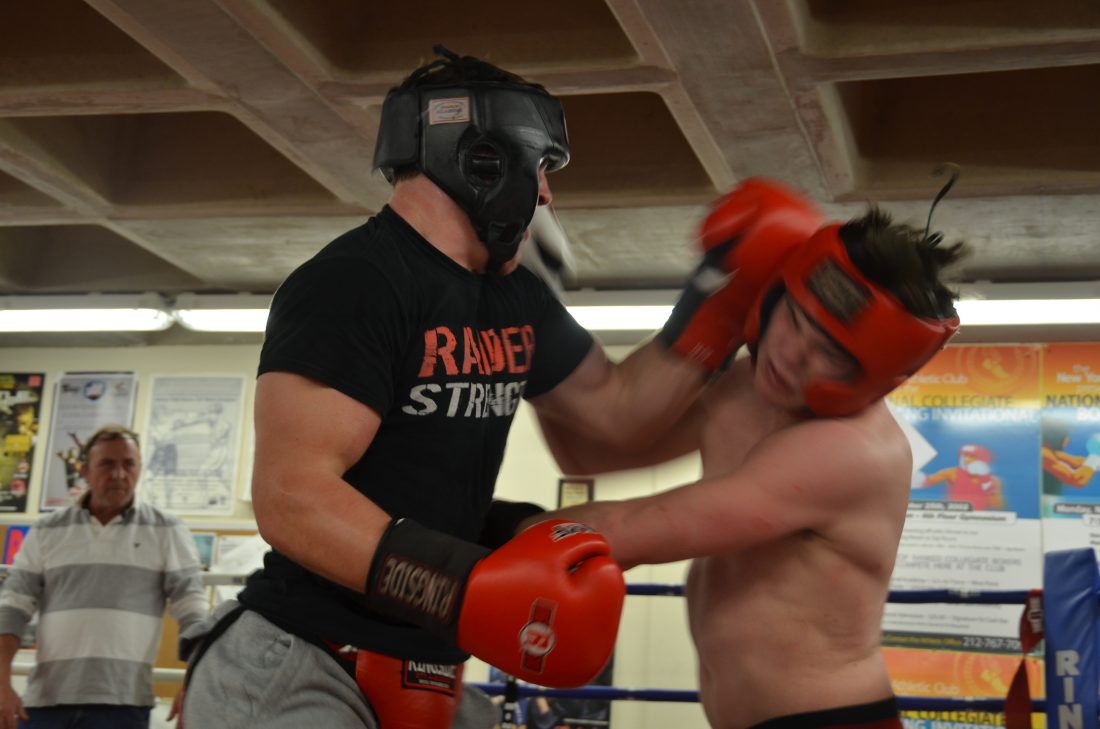 MILL HALL- The final bell rang after a grueling nine minutes of sparring— and Bellefonte native Stephen Kutches exited the ring with a leaking nose and a few drops of his blood glued to the canvas. After a quick breather, he congratulatory pounded gloves with teammate Avery Drake as Drake proceeded to spot him advice on diversifying his punch-selection in the ring.

“He told me there was a certain combination I could’ve threw a couple of times,” Kutches said. “I needed to attack the body more. I kind of neglected the body there.”

This disciplined-violence deters certain athletes, but entices others. Secluded in the mid-section of the LHU Zimmerli Gymnasium, student-athletes are training in a compact room and learning the sweet science. Guided by long-time LHU trainer Ken Cooper, the fighters are being taught how to hit and not get hit by their opponent. It’s a simple concept– but as Mike Tyson eloquently stated, “everybody has a plan until they get punched in the mouth.”

“It’s totally different than a lot of other sports,” Cooper said. “Of course you have to be mentally prepared to go in. Not everyone can get punched in the face, let’s face it.”

Tomorrow, LHU hosts its 41st annual Lock Haven University Collegiate Boxing Invitational. Student-fighters from 11 different participating universities will compete in the event with 11 bouts in the undercard and 13 in the main event.

“It should be an action-packed event,” Cooper said. “I think we’re gonna have a big crowd. I’ve sold almost all my tables out completely. It should be a good night of boxing.”

LHU’s stable will have three fighters compete in the main event– and as many as six boxers compete in Saturday’s invite. Headlining LHU’s main card is Allyanna Bates, Avery Drake and Stephen Kutches.

Bates is undoubtedly LHU’s most experienced fighter. Raised in a military household, her parents introduced her to the sport at nine to teach her self-defense. Since then, she’s built an extensive-amateur pedigree and competed on the Junior Olympic Boxing team in her mid teens. She won a silver medal at Nationals at 17 years old.

“My coach, Grady Brewer, put me to spar because he saw good potential and footwork,” Bates said of her first time lacing up gloves 10 years ago. “I sparred my first time and I guess I just liked it so I stuck with it.”

“My goal is not only to win my fight, but win outstanding fighter of the night,” Drake said.

Kutches began his fight career last spring, but competed in his first collegiate bout last weekend at the Penn State Home Show. Kutches lost a criteria-decision to an Army fighter, but still impressed his coach in his first action.

“He a very tough young man,” coach Cooper said of Kutches. “He’s a former football player from Bellefonte and he’s come on really quick with the sport.”

TALE OF THE TAPE

Fight Style: Bates’ high ring IQ separates her from her opponents. She’s prefers to out-smart her foes and out-work them in the ring.

I’m more of a thinker,” she said. “So the first round I like to feel the person out, so I’ll flinch, see what way they go and try to counteract them. So I’m more of a you punch me, and I’m going to block some of them, but I will set up a combination to out-punch you.”

Fight Style: Drake has an educated jab. He uses it to frustrate his opponents and set up his power punches.

“I like to work my jab and pivot around the circle,” Drake explained. “I like to work the space until I have to plant and really put something down.”

Fight Style: Kutches is a high-volume puncher who wants to wear you down with a relentless work rate.

“I try to land as many punches as I can,” Kutches said. “But I try to pace myself. I can’t just start going wild.”