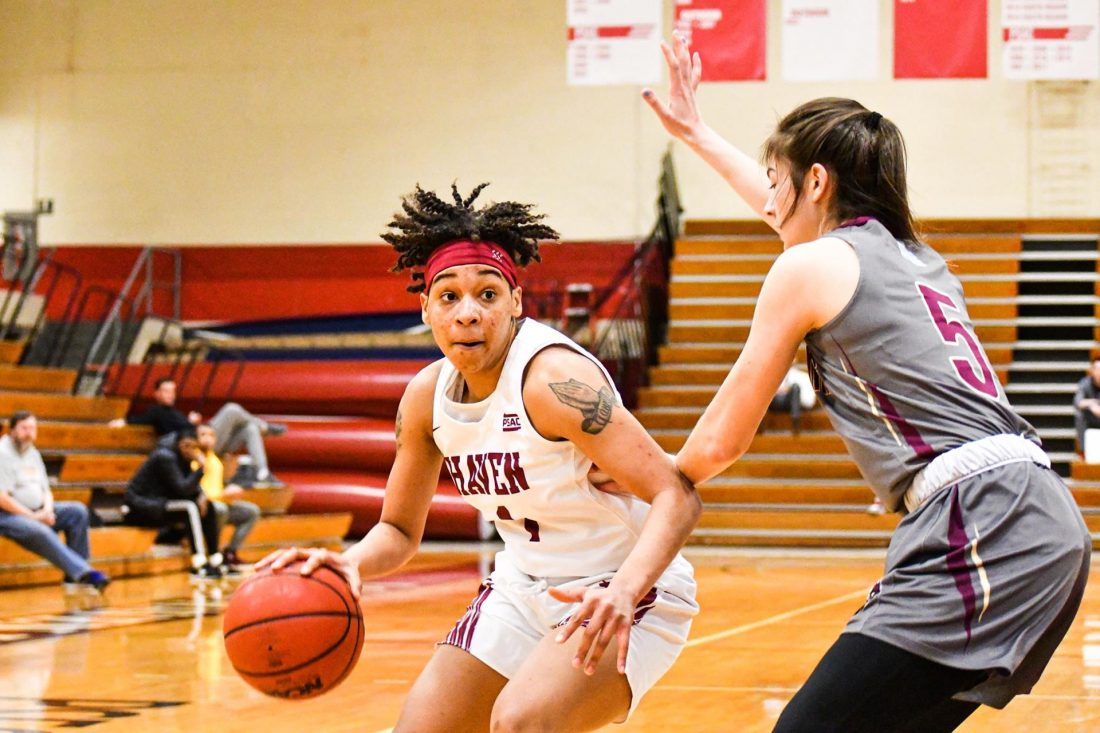 LOCK HAVEN — A few weeks ago, the Lock Haven University women’s basketball team rode runs of 7-0 and 10-0 en route to a 61-55 win at Nelson Field House.

Coming into Wednesday night’s rematch at Thomas Field House with playoff ramifications at stake, the Huskies were on a roll, having won four of their five previous outings.

However, not to be denied taking the upper hand with a sweep of the season series, the Bald Eagles took a big step toward possible postseason playoffs with a 68-53 win over the Huskies.

“Every win down the stretch is so crucial right now,” said LHU head coach Jennifer Smith. “Every game is such a battle and tonight Janelle Robinson stepped up big for us. She has been a little inconsistent to this point, but tonight she just said to herself, ‘hey, I am pretty good at basketball,’ and she did an outstanding job. I am also proud of Bink (Redman) because although she struggled a little bit, she took control of things in the fourth quarter and said, ‘hey we are going to win this game,’ and they went out and did it.”

Other than the win being big, it was especially big because of the second win of the season over the Huskies.

“This one was real big because it means that we swept Bloom for the year,” said Smith. “If we end in a tie, we have the tie-breaker over them. Hopefully we can carry this momentum over to Saturday.”

The opening period resembled the third race at Penn National Race Track as the two teams raced up-and-down the floor until the Bald Eagles took the first turn with a 19-10 lead.

Bloom opened the second period with an 8-2 run, but the Bald Eagles got their legs under themselves for the remainder of the period to take a 36-25 lead to the locker room at the break.

Rileigh Devine and Janelle Robinson led the Eagles at the break with 11 points each, Devine riding the strength with three treys while Robinson was a perfect 5-for-5 from the field.

For the game, Devine finished with 15 points, while Robinson counted 13, Robinson collecting 13 rebounds for her big double-double.

“Just being a senior, I think I have a better understanding of the clock and the time,” said Devine. “My teammates have faith in me and when we get on offense, they know they can get the ball to me. This was possibly our biggest game of the season because we knew we had to get a win so we just came out ready to go.”

Bloom shaved four points off its deficit with a 17-13 third period with the Bald Eagles still maintaining the lead at 49-42.

Not taking anything for granted, the Bald Eagles simply took care of business in the final 10 minutes to put the game into the books as a “W.”

Bink Redman led all scorers in the game with 19 points, Redman narrowly missing a double-double with nine boards.

“I just have a lot of confidence in myself and my teammates that if I miss they have my back,” said Redman. “Regardless of what it takes to win, we just have to make it work. Whatever my coach wants me to do, I’ll do my best to get it done.”

Next on the agenda will be a trip to West Chester Saturday to battle the Golden Rams.