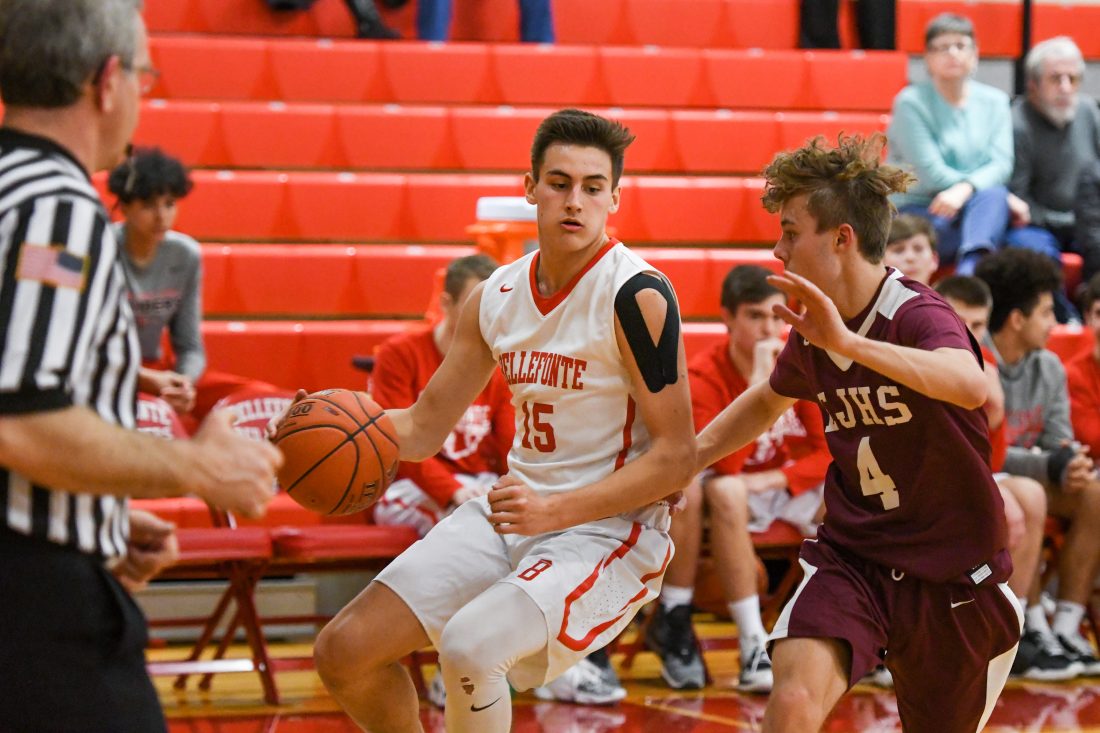 (EXPRESS FILE PHOTO) Bellefonte’s Ben McCartney dribbles the ball past a defender in a game this season. McCartney reached the 1,000 career-points mark this season and ended the year with a first-team Mountain League All-Star selection.

Bellefonte’s Ben McCartney earned first-team honors. He was a vital component to the Red Raiders’ offense, led the team in scoring and topped the 1,000-career point threshold in his senior season this year.

“Ben has had some special moments and has been a major contributor to our team and program over the last four years,” Bellefonte boy’s coach Kris Glunt said. ” I am happy for him for all that he’s accomplished, and his Mountain League selection is well deserved. He was the focal point each night for the opposing defense and still managed great offensive production in a very efficient manner.”

“Sara has put in a lot of work over the past year in developing her skill set,” Bellefonte girl’s coach Marcus Toomer said. “She is very coachable and is always looking to get better. I feel that her confidence has gone up tremendously this season and that has aided Sara in her growth as a player. I strongly believe that Sara will only get better and will develop into a strong all-around player for us next season. She truly deserves this all-star selection.”

BEA’s Lacee Barnhart was a second-team selection for the girl’s squad. Barnhart helped anchor a small-number roster as the eight-member Eagles team surpassed expectations and recorded seven wins this year.

“Lacee had a great year for us,” BEA coach Darrin Hazel said. “She wanted the ball in her hands every game and competed very hard for her team. She was the fourth leading scorer in the Mountain League and that is a reflection of what a tremendous year she had since there are so many great players.”

Penns Valley’s Logan Snyder was a first-team selection. He’s helped guide the Rams to a 15-8 record this season.

Penns Valley’s Hannah Montminy received first-team recognition. She led the Rams with 16.8 points per game this season. She also had team-highs in assists and steals.

Montminy’s a prolific scorer who recorded her 1,000th-career point this season.