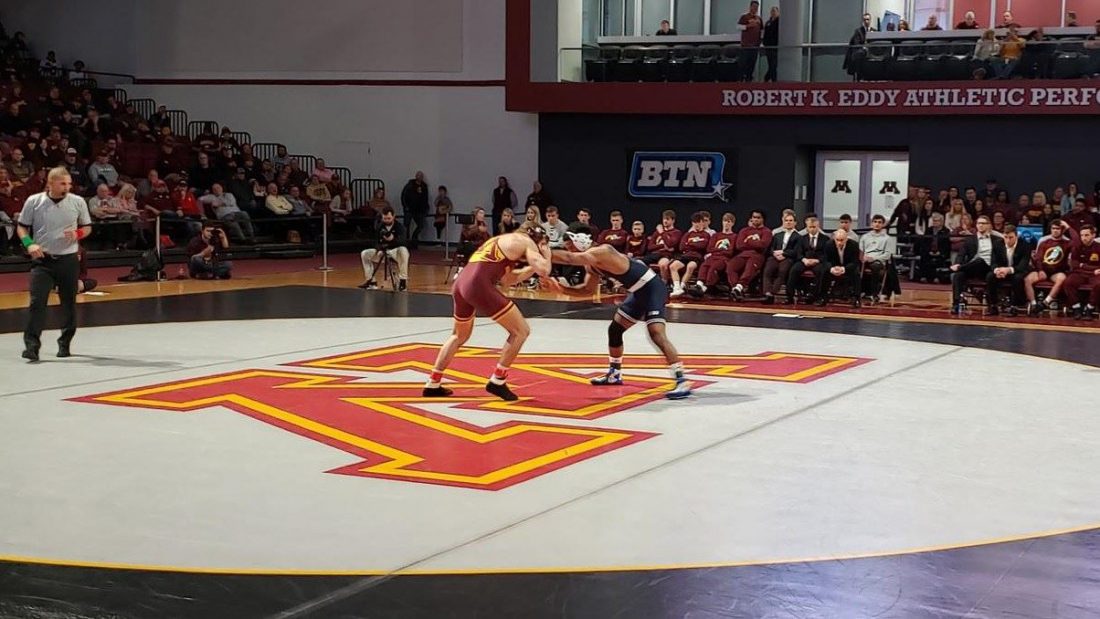 MINNEAPOLIS, Minn. – The Penn State Nittany Lions (10-2, 7-1 B1G), ranked No. 2 in the latest InterMat Tournament Power Index, rolled through No. 6 Minnesota (9-6, 4-3 B1G) in the Lions’ final road dual of the season. Penn State won seven of ten bouts for the second time in three days and posted a convincing 31-10 victory in Minneapolis.

With marquee wins from Nick Lee at 141 and Mark Hall at 174, Penn State closed out its Big Ten dual meet season with a second lopsided road win. Penn State is wrapping up of a run of four-of-five road duals in 16 days, including action at Nebraska, Iowa, Wisconsin and Minnesota. All rankings listed are InterMat, the official wrestling rankings of the Big Ten Conference.

The dual began at 125 where freshman Brandon Meredith (Limerick, Pa.) received a forfeit victory to give the Nittany Lions an early 6-0 lead. Sophomore Roman Bravo-Young (Tucson, Ariz.), ranked No. 2 at 133, put on a takedown clinic in a 23-8 tech fall over Boo Dryden. Bravo-Young tallied 10 takedowns in the tech fall at the 6:29 mark.

Junior Nick Lee (Evansville, Ind.), ranked No. 2 at 141, took on No. 5 Mitch McKee in one of the dual’s most anticipated matchups. The Nittany Lion junior took care of things quickly however, taking McKee down midway through the first period, locking up a cradle and pinning the fifth-ranked Gopher at the 1:56 mark to put the Nittany Lions up 17-0. Sophomore Jarod Verkleeren (Greensburg, Pa.) batted No. 6 Brayton Lee for over 7:00 at 149 before dropping a hard-fought 7-5 (sv) decision to the sixth-ranked Gopher. Junior Luke Gardner (Pottsville, Pa.) moved up to 157 for the dual and nearly took down gopher Ryan Thomas, but a late counter takedown was the difference in a 5-4 Thomas victory. Penn State led 17-6 at intermission.

Senior Vincenzo Joseph (Pittsburgh, Pa.), ranked No. 1 at 165, dominated Gopher Bailee O’Reilly to open up the second half. Joseph rolled up five takedowns in a 14-5 major decision to put Penn State up 21-6. Senior Mark Hall (Apple Valley, Minn.), ranked No. 2 at 174, then took on No. 8 Devin Skatzka and kept Penn State’s winning ways going. Hall used three takedowns to win 7-4 over the eighth-ranked Gopher and Penn State led 24-6.

True freshman Aaron Brooks (Hagerstown, Md.), ranked No. 7 at 184, the clinched the dual meet with a dominant 13-3 major over Minnesota’s Owen Webster. Brooks’ win put the Lions up 28-6 with two bouts remaining. Senior Shakur Rasheed (Coram, N.Y.), ranked No. 18 at 197, held off a late rally from Gopher Garrett Joles and posted a 7-5 win with 3:32 in riding time. True freshman Seth Nevills (Clovis, Calif.), ranked No. 15 at 285, took on No. 1 Gable Steveson in the dual’s final matchup and dropped a 13-5 major. The Nittany Lions walked away with a second dominating road win in three days, 31-10 over the Gophers.