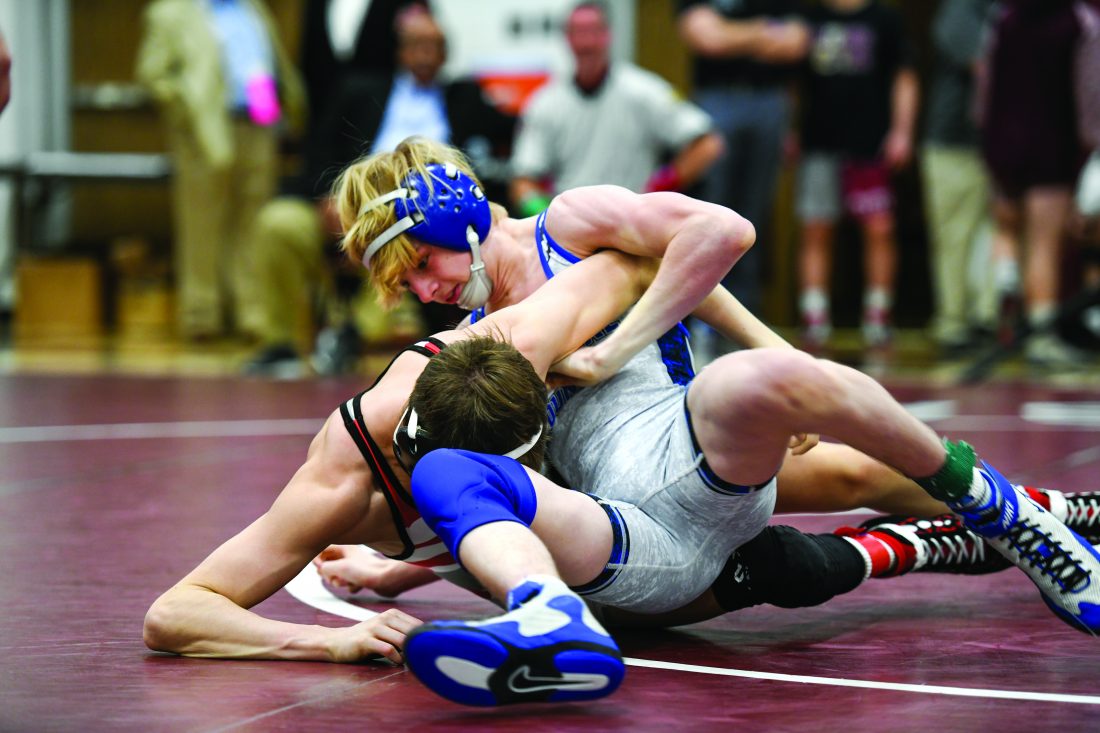 ALTOONA- The best of the best in District 6 Class AAA wrestling gathered in the Field House at Altoona High School Saturday for the chance to be crowned District Champion. And for others, it was an opportunity to move onto next week’s Regional Tournament.

It was a great day for the Bellefonte wrestling team as it tallied nine wrestlers moving onto next week’s regional competition, while Central Mountain notched 12.

Bellefonte led the way with four District Champions while Central Mountain had two.

At 106, Central Mountain’s Gino Serafini had a third-place win over Juniata’s Casey Smith.

“Overall, it was a solid tournament. Coming in we were probably the fourth best team but we had somethings go our way. You have to create your own opportunities,” said Bellefonte coach Mike Maney. “We lost some close ones there in the semifinals otherwise we could have been in the hunt for the team tiles but overall it was a solid tournament. In a couple of weights we wrestled above their seed. Definitely proud of the guys who won the District Championships.”

Going into 145, Mifflin County met Central Mountain as the Huskies’ Ethan Kauffman went up against Lane Porter. Despite a spirited effort Kauffman was too much for Porter as he fell 10-4.

In the 160-pound division, Ethan Richner made it three gold medals for the Red Raiders as he dominated Hollidaysburg’s Campbell Walls, 16-1, with a tech fall at 4:57.

It was a battle between Central Mountain and Bellefonte in the third-place match at 170.

Central Mountain’s Caleb Porter went head-to-head against Bellefonte’s Stephen Ivicic. When the buzzer sounded after a very grueling, low-scoring match up, Porter escaped the 2-0 victor, clinching the third-place spot while Ivicic had to settle for a fourth spot.

Bellefonte tried to add to its three previous gold medals with one at 182 when Ethan Rossman went up against Collin Allman. Rossman was a takedown-machine, posting three early ones in the first to take an early 7-2 advantage. From there Rossman controlled the match allowing four points en route to the 19-4 at the 4:24 mark.

The Wildcats were looking for another third-place finish but Mifflin County’s Brycen Hassinger got ahead early and never looked back topping Paul Risley in a pin in 2:16. However, Risley finished with a fourth-place nod.

At 195, Central Mountain was looking to add to their championship when Nikolas Miller battled State College’s Tyler Price. After a second-period escape, State held onto a 1-0 advantage. Tied at one heading into the overtime, Price picked up a takedown six seconds in a sudden victory to give State College the 3-1 win.

In the final weight class of the night, Central Mountain once again broke the top four when Cyrus McCarl went up against Altoona’s Trevor Manley. A pin by Manley, during a 1-1 tie, gave McCarl a fourth-place finish.

Both teams will be represented well when they return to Altoona for Regional action.

Editor’s note: Mifflin County led with six-title wins on the afternoon while Bellefonte captured four. Rounding things out was Central Mountain with two.

Mifflin County dominated to capture the team title with 214 points, Central Mountain finished second with a mark of 182 while Bellefonte was not far behind with a 176.5 at third.