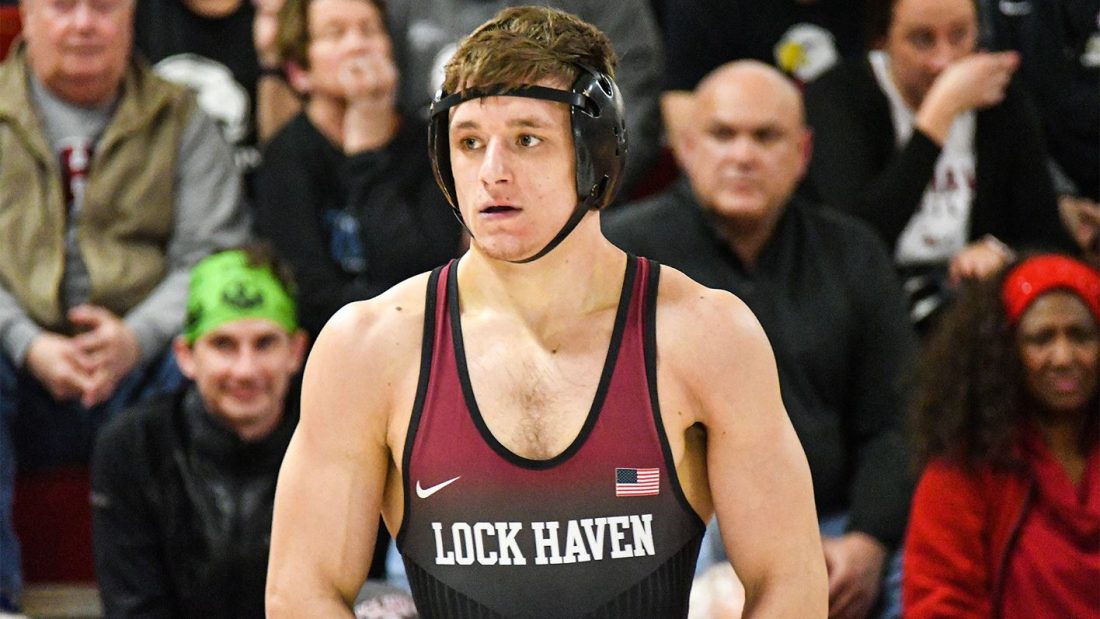 (LHU ATHLETICS) Lock Haven University’s Alex Klucker stares at the competition in an NCAA wrestling match. Klucker and the Eagles lost to Cornell on Saturday, 22-13.

When the dual meet was in the books, the final had it at Cornell 22, LHU 13, but that was only part of the story.

Prior to the meet, the LHU mat program recognized the group of seniors for their contribution to the success of the program.

“This was one of my first recruiting classes here and it was a special one because they bought in and put the work in to make a big difference in our program,” said LHU head coach Scott Moore. “Over the last three or four years we saw a lot of that success with individual and team titles in the EWL as well as All-Americans and these guys were a big part of that story. Just their character and discipline not only as individuals but as a team were a big part of our program. Having eight seniors is a big class, but they have certainly made their mark in our program as far as 100-match winners and conference titles. They have been good both in and out of the classroom as well and I think the university and the community recognized those guys here tonight.”

Not only have the seniors been a big part over the past four or five years, but they were also big in the battle with Cornell.

“The seniors went out there and wrestled really well,” Moore praised of the group. “Most of them came out with wins and the win by (Kyle) Shoop was a big one because his guy beat the 11th-ranked guy last week. For him to go out and get a win against a tough kid on senior night was big. And even though D. J. Fehlman lost, that kid was undefeated on the year. The guys wrestled well and they fought hard and I think we are getting closer to where we need to be for MACs (Mid-American Conference tournament). The crowd was awesome and we get so much support in this town and it was a great presentation of their talents of what they have put into this program.”

The dual meet was a see-saw affair from the get-go, the two teams battling through two ties and three lead changes in the first eight bouts.

Starting at 125, Luke Werner got the Bald Eagles on the board first when he used three takedowns, a reversal and time for a 9-6 win over Dom Lajoie, but unbeaten Chas Tucker returned the favor when he remained that way with a 5-3 decision over D. J. Fehlman at 133.

Kyle Shoop put the Bald Eagles back on top at 141 as he rode four back points in the middle period to a 5-2 decision over Noah Baughman, but the Big Red got themselves back even at 149 when Hunter Richard rode a 5-takedown effort to a 14-5 major decision over Collin Glorioso.

Alex Klucker gave the Bald Eagles the lead heading into intermission when he slicked Adam Santoro for a takedown and eight back points in the opening period before cruising to a 14-1 major decision.

“I competed against him a couple of times in the past year and one time I was up 5-1 and ended up getting pinned,” said Klucker. “I trained with him so I was familiar with his style. I knew that if I could go out there, get a takedown and some back points for a cushion that would be big. When that happens it makes the match seem a little easier. That was my strategy to go out there, get a quick score, get the lead and put the pressure on him.”

The pendulum swung back in favor of Cornell at 165 when Milak Dawkins rode five takedowns to a 13-6 decision over Austin Bell. With the Dawkins win, the team score was all deadlocked at 10-all with four bouts remaining.

Jared Siegrist stayed tough on his feet at 174 when he put the Eagles back on top with a takedown out of a scramble for a 3-1 win over Andrew Berreysa.

With the win by Siegrist, the Bald Eagles took a 13-10 lead, their final lead of the night as the Big Red swept the final three bouts.

“My mindset when it got late was to just go and get the next point,” said Siegrist. “He was keeping his distance most of the time and I knew had some Greco background so I didn’t want to stay up and go upper body with him. I just kept my elbows in to try and get in on his legs and it worked for me.”

LHU’s Corey Hazel made his return to the mat after missing most of the season due to an injury, and Hazel couldn’t cope with the takedown efforts of Jonathan Loew, falling by the final of 14-6.

Ranked Ben Darmstadt was simply too much horse for Parker McClellan as the Bid Red 197-pounder rode 12 back points to a 16-0 technical fall in 3:42 before Brendan Furman put the win in the books for Cornell at 285 with a 10-1 major decision over Trey Hartsock.