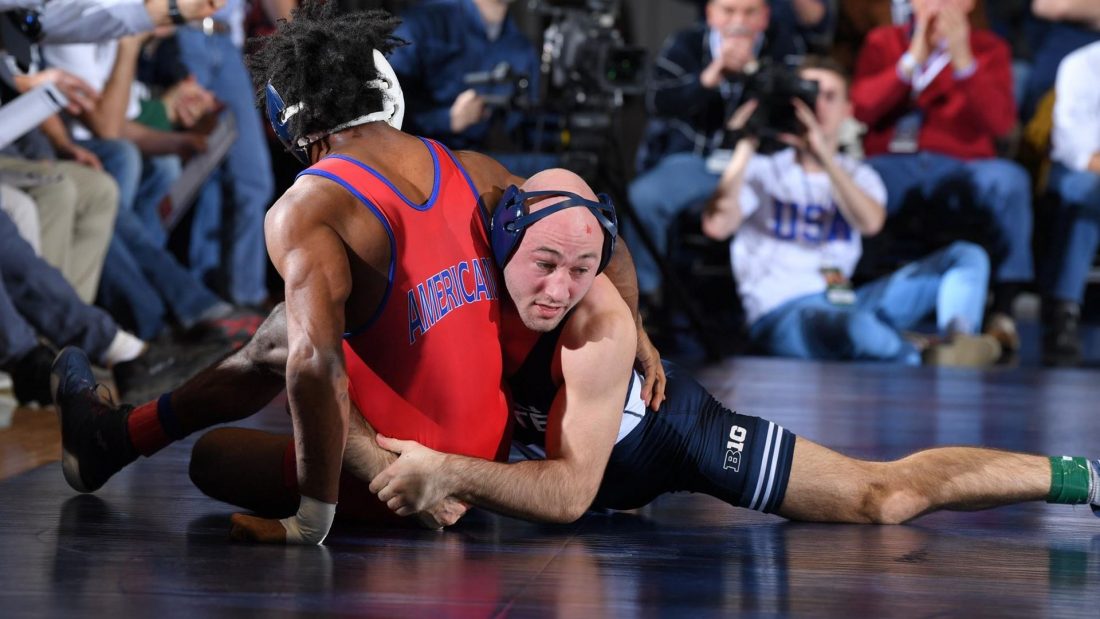 “I think the guys are wrestling well. We’ll find out as we get to the Big Tens and nationals. I feel like they’re wrestling the best that they have and I think the attitude and the perspective is on point right now where we need to be,” Head Coach Cael Sanderson said.

“I was thinking the whole time I wanted to end my last match with a cradle just because that’s what got me rolling and that’s what the fans love,” Rasheed admitted.

“I shouldn’t have been thinking about it but Cenzo got a pin, cradle, and Hall got a pin, cradle. I can’t be the only senior not to pin. So, yeah, in my head I was like, ‘I’m getting a pin no matter what.’ Cradle is what I wanted.”

It took Joseph 4:00 to record his fall, and Hall needed 2:33. Rasheed wasted little time and secured his 1:04 into the bout. Bravo-Young didn’t use a crossface cradle, but he did put on a takedown clinic, securing nine of them, before decking his opponent in 2:10.

Other than the drama of how the seniors would bid adieu to the crowd, Jarod Verkleeren provided the crowd some theatrics as he upset No. 8 Kizhan Clarke. With the bout tied 1-1 and time winding down, Clarke shot in on a double leg, which Verkleeren countered on the edge of the mat for the winning takedown with just a couple ticks left on the clock.

“He kinda shot a double. I had my arm down ready and slid it up and kinda body locked him on the edge and got the takedown,” Verkleeren said. “We were in that body lock position a little bit earlier on in the match. I felt he was kind of hesitant a little there so I thought if we did get there again I could squeak one by.”

The win was a breakthrough for Verkleeren, who had lost in sudden victory the past two weekends to No. 1 Sammy Sasso of Ohio State and No. 6 Brayton Lee of Minnesota.

“Yeah, it feels good. I think I’m getting better, so that’s the goal, just keep getting better come March,” Verkleeren said. “I thought I could beat those guys so hopefully I get another shot at it.”

Gardner’s appearance at 157 might be a preview of the postseason. Sanderson confirmed after the match that Brady Berge is done for the season. Berge wrestled just twice since sustaining a head injury in the U23 World Championships in late October. The coach said the staff would have to decide between Gardner and Bo Pipher who would be the 157-pounder postseason starter.