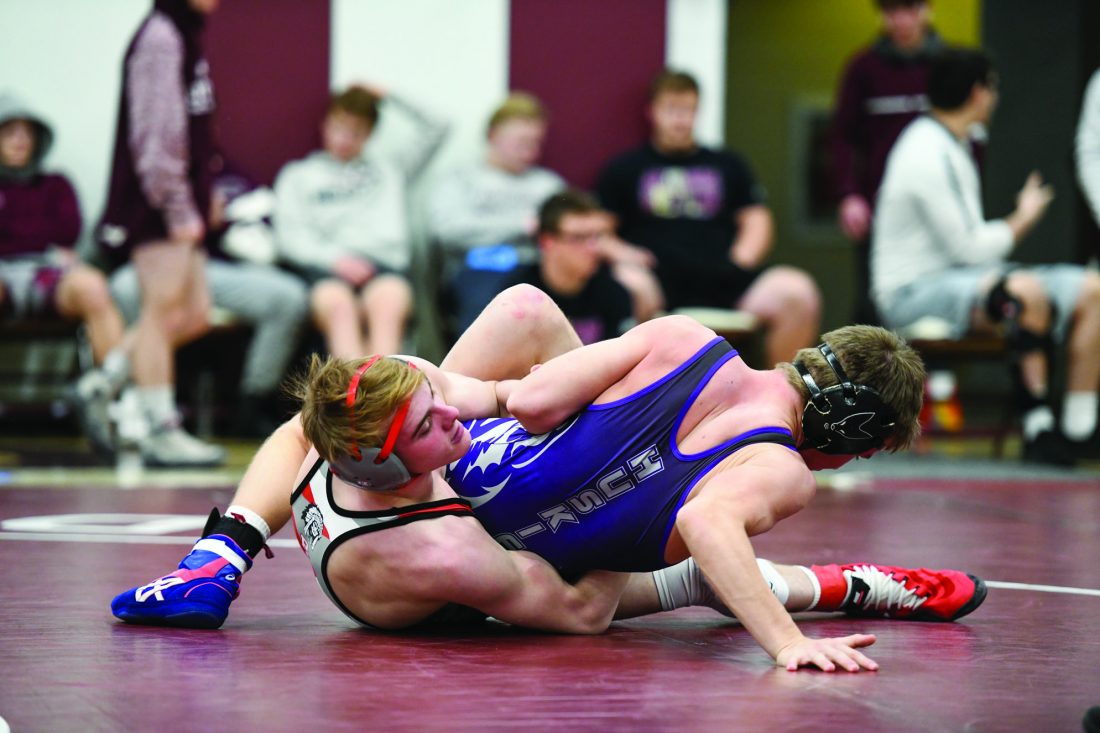 In coach Mike Maney’s time as the head coach of Bellefonte Area High School wrestling, six wrestlers is the most he’s ever sent to the PIAA State Tournament. That is what the Red Raiders bring to Hershey this year, after crowing four champions and having six finalists at the AAA North West Regionals in Altoona last weekend.

“It’s exciting for the program,” Maney said. “Certainly those guys have the earned the opportunity there by putting in a lot of work.”

At 113 pounds, Bellefonte sophomore Aidan O’Shea (34-8) makes his first trip to states. As the second-place finisher in the region, he gets a first-round meeting with Dominic Findora (34-7) of Downingtown West in the opening round.

Also a sophomore, Findora makes his second trip to Hershey. He did not place in his freshman campaign. The two have never faced each other. The winner of that opening round bout is on a collision course with Cumberland Valley senior Ben Monn, the No. 2 overall seed in the bracket and a two-time state place winner.

Maney says that O’Shea needs to come in with the same mentality as all of his guys.

“Just going down there with the mindset that you’re just not happy to be there,” Maney said. “Your goal is to get on the podium and place.”

He says that O’Shea’s ability from the top position is his biggest strength, and it gives him the ability to potentially string together a run for the Red Raiders.

At 120 pounds, Bellefonte brings North West region champion Lane Aikey. The junior is 21-4 this season, and comes off a finals victory over Carter Weaver of Williamsport by a score of 3-0.

Aikey makes his second trip to the tournament, after not placing in his sophomore year. He’s set to face the winner of junior Jimmy King (29-11) of West Chester Rustin, and Luis Vargas (39-5) of Bethlehem Freedom.

“He has to wrestle confidently,” Maney said. “Similar to last year. Hopefully he can build off of that experience.”

Maney noted that 120 is one of the deeper weight classes in the entire tournament.

At 126, Bellefonte has another North West title winner in that of sophomore Jude Swisher. Wrestling for State College as a freshman, he made it to states last year, but is looking to take the next step this time around. In his first season in the red and white, he’s gone 36-3 to this point. He enters off a 15-4 major decision over Kaeman Smith of Cathedral Prep in Saturday’s regional title bout.

“His best asset is his engine,” Maney said. “He just needs to go out and use that to his advantage.”

Swisher gets the winner of Eamonn Logue (31-5) and Chance Babb (25-10). Swisher beat Logue 5-1 for third place in the Buckskin classic. He has never faced Babb.

At 160, Bellefonte has its only returning place winner. Junior Ethan Richner took sixth place last year in his first appearance in Hershey. This year he is 32-2, and is the number two overall seed in the bracket. He had a dominant 9-1 major decision victory against Selinsgrove’s Coy Bastian in the regional finals Saturday.

“I was really impressed with his match in the finals in regionals,” Maney said. “(Bastian) was ranked higher going into the tournament, but Richner controlled the match.”

Richner will square off against either Matt Kidwell (43-7) out of Father Judge, or Colby Romjue (29-2) from Susquehannock. Richner beat Romjue 9-5 last year in the state quarterfinals, and lost 4-1 to Kidwell this season in the finals of the Buckskin Classic. Along with 120, Maney said that this is another one of the really loaded weight classes in the tournament.

At 182, junior Ethan Rossman comes off a regional title, where he beat Griffin Buzzell of Meadville 7-0. He is a returning qualifier, and has made great strides since then. He’s 33-2 this season, with his only losses coming to former state champions.

“You can’t substitute experience,” Maney said. “That’s why it’s important to get to the state tournament as often as you can. I think he might have got caught up in the excitement a little bit (last year).”

Rossman gets either Caden Wright (33-6) out of Emmaus, or Matt Hamilton (33-6) of Conestoga. He hasn’t faced either wrestler yet.

Wrapping up this Bellefonte group of six is the lone senior, Tyler Benner at 195 pounds. He’s put together a storybook run to states as the 14 seed in the North West regionals. Benner advanced through the regionals until Central Mountain’s Nik Miller pinned him in the finals.

Benner is 27-11 in his only year as Bellefonte’s full-time starter. He spent a great deal of the offseason lifting, and has gotten to practice with Bellefonte’s loaded lineup in the wrestling room all season.

“He gets to practice with Rossman everyday,” Maney said. “We just want that Cinderella story to continue.”

Benner faces Louis Carbajal (28-12) of Spring Ford in the opening road. The two have never wrestled each other.

With six wrestlers, Bellefonte has a chance to achieve a great deal in the team standings. Maney hopes the fact that almost half his lineup is there will help his guys with their comfort levels at the Giant Center.

“The more guys you get there it helps with the guys’ mentality,” Maney said.