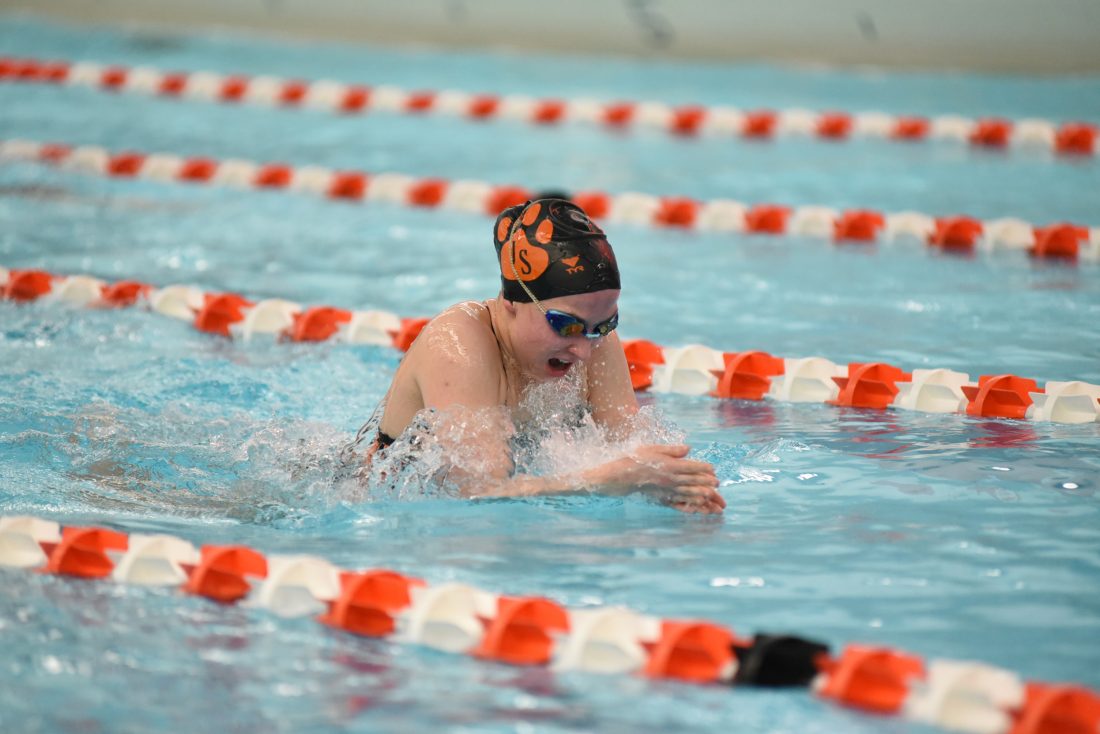 (SUN-GAZETTE FILE PHOTO) Jersey Shore's Meaghan Keegan competes in a relay against Central Columbia in January. Keegan will be competing at the PIAA swimming and diving championships, which was postponed due to concerns of the coronavirus.

Amid the coronavirus outbreak around the globe, the local community has begun to see the downward spiral and impact it has and will take on the local high school athletics community as the PIAA State Swimming Championships have officially been postponed.

Three Jersey Shore state swimming qualifiers woke up Thursday morning and packed into the car to head to Bucknell University, for what they thought would be their final day of prep work and familiarity in the water before they took on the AA swimming championships Friday. But a cautious PIAA announcement postponed that opportunity for at least two weeks.

Alex Butzler, Meaghan Keegan and Jordan O’Connor were en route to the Kinney Natatorium when they learned of the news Thursday morning.

“I was in the car on the way there with my coaches and fellow swimmers, my reaction was disappointed,” Butzler said of learning of the announcement.

Butzler, a Junior for Jersey Shore, was set to make his first state swimming appearance, more than eager after qualifying based on time following all district meets. Following a tough Sophomore season, Butzler’s 50-yard and 100-yard freestyle times qualified him for the state tournament even without a district title.

“This was my first time making it to high school states. I was taking a nap and my mom woke me up and told me I made it to states and I was really happy. I didn’t think my 100-freestyle was a very good time, but I somehow made it there and I was like ‘one more day,'” Butzler said.

“It was definitely very exciting to know that he didn’t have to win it to advance. To be able to see him at his first state meet is exciting for everything he’s put in this season,” head coach Jenna Brooks said of Butzler qualifying individually.

The Bulldog swimmers plan to stay prepped and prepared over the next 14 days, at least, to continue to chase their goals and objectives that they had when they woke up for the past few mornings before the unfortunate, yet necessary, postponement.

“We haven’t discussed it too much yet, we’re gonna train a little bit normal and taper back again,” junior Meaghan Keegan said, who qualified for her first individual state event after making a sophomore appearance on the relay team.

Keegan, qualified for states in the 100-yard butterfly as the district champion and has been more than focused in the past two weeks leading up to what would be the start of her state competition.

“I didn’t focus on it too much because I didn’t want to be super nervous for it, but I wanted to go there, swim fast, trust my training and see what I could do,” Keegan said of her past few weeks. “It didn’t change too much, it puts a different perspective on the sport and shows me all my hard work does pay off in the end. It gets me excited to swim again and makes the season more exciting,” she added thinking about the experience she will now have as she heads into her senior season.

Senior Jordan O’Connor will stay focused as she tries to become just the fifth Bulldog swimmer to medal in consecutive individual events in the history of the program.

“Jordan, she’s seen the competition and she’s not looking at places and I know she has a time to look for and she’ll probably go after her own school record too,” Brooks said of her senior swimmer.

The PIAA has only issued a statement postponing any further competition until at least two weeks out where the state of the community’s safety will be reevaluated moving forward. In the meantime, the Shore swimmers will try to maintain focus and prep for their opportunity to get into that pool at a chance for a medal.

“Me and Jordan train together, it’s been really fun just to get to the meet with her. Not very stressful. It’s sad not being able to swim now but you have to be excited and stay ready and bring the same energy. I’m having fun, but I’m focusing on the time and trying to do better than I did at districts,” Keegan said as she looks ahead at the hazy future of her junior season.

“I’m playing it day-by-day, it’s mentally draining. My teammates and coaches have been the most supportive people through everything, they’re there when I go into my race, they’re there when I get out of my race, practice, anything I have troubles with, I know I can go to them,” Butzler added on his support system as they enter an unknown territory for the next few weeks.

The PIAA Swimming Championships are up in the air for the current time, but the Bulldog swimmers are focused on making a splash, and for senior O’Connor, solidifying her mark as soon as the safety of the community is solidified