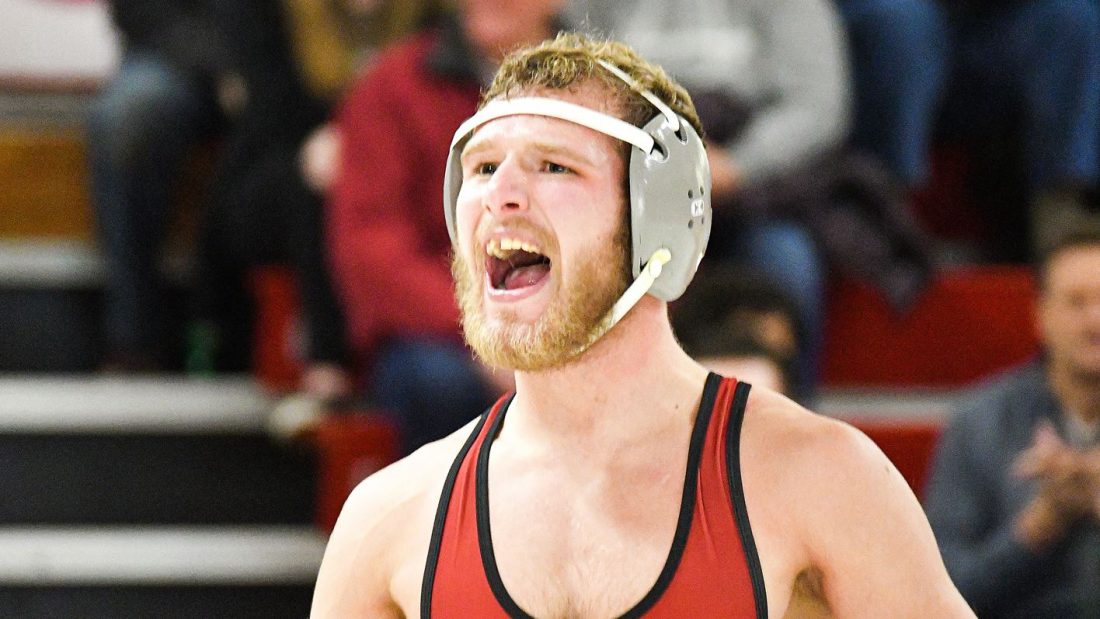 Lock Haven University wrestling will fly out five of its athletes to Minneapolis next week as the Bald Eagles try to make another big push at nationals.

LHU’s Luke Werner (125 pounds), DJ Fehlman (133), Kyle Shoop (141), and Jared Siegrist (174) all earned automatic-tournament bids with their performances at the Mid-American Conference (MAC) Championships. Alex Klucker (157), was one of the 48 wrestlers in Division I to secure an at-large bid on Tuesday.

On Wednesday night, the NCAA released the brackets for the 2020 Division I Wrestling Championships. While the seeds are a factor in which wrestlers the Lock Haven guys will face, it’s a challenge to succeed at nationals with whatever number is placed next to your name.

“Realistically, the higher you’re seeded the little bit easier of a path you’re going to have,” Lock Haven wrestling coach Scott Moore said on Tuesday’s LHU Coaches Show. “It’s not really about the seed. It’s about what you show up with, and your attitude. I know guys like Kyle Shoop (a 2019 All-American) know that. It doesn’t matter if you’re ranked fifteenth or second, you can still become an All-American.”

Werner (31-5), a junior out of Liberty High School in Bethlehem, earned the No. 13 seed at 125 pounds. This puts him up against Gage Curry (30-9) of American in the opening round on Thursday. Curry, the number 20 seed, is a redshirt-junior and three-time national qualifier. He and Werner have never faced each other.

Werner makes his first trip to the tournament, after coming quite close his sophomore year. Despite being pinned by Logan Heil of Cleveland State in 1:18 during the quarterfinals of the MAC Championships, Werner rallied to pick up four consecutive wins. This got him third place in the MAC, and the final allocated NCAA spot at that weight class.

Werner has had a terrific season, and ranks second in Division I wrestling with 21 bonus point wins on the season. That only trails teammate Jonathan Ross, who in his 52-win redshirt season has racked up 25 victories via bonus points. His resume includes finishing in second place at the Southern Scuffle, and a 7-1 record in dual meets.

Fehlman (25-9) is a redshirt-senior out of Warren Area High School in Warren, PA. He got the No. 30 seed at 133 pounds. He’s set to face third-seeded Cornell senior Chas Tucker (31-0) l in the first round of the NCAA Wrestling Championships. Fehlman is 1-3 against Tucker, including a 5-3 loss in February in the Lock Haven-Cornell dual meet.

This is Fehlman’s third appearance in the tournament, and his second consecutive trip to nationals. In 2019, he went 2-2 in Pittsburgh as the No. 24 seed. That stretch included a 7-2 upset win over Tucker (the ninth seed) in the first round.

Fehlman has had an accomplished career at Lock Haven, and sits at 113-career victories. This season he’s gone 12-2 in duals, and 7-0 in MAC duals. He’ll look to cap off his time with the Bald Eagles in style, as he tries to make a run at nationals.

Shoop (22-7) is a redshirt-senior out of Boiling Springs High School in Boiling Springs, PA. Coming off of a seventh-place finish at the 2019 tournament, Shoop has the No. 20 seed at 141 pounds. He’ll start off against redshirt-freshman Michael Blockhus (22-10), the No. 13 seed out of Northern Iowa. The two have not faced each other in the past.

Shoop has made the tournament four straight years. Last year was his break-through year, winning four matches at nationals as the No. 13 seed to become an All-American. With 130 career wins, he’s second all-time on the Lock Haven list. He also holds the program-record for technical falls.

Shoop earned an automatic bid to NCAA’s with his fifth-place finish in the MAC Championships. He’ll step into a 141 bracket that looks noticeably different than a year ago. Eight of the top 10 seeds from 2019 are not in the bracket. They’ve either graduated, are taking a redshirt-year, or have moved to a different weight class.

Alex Klucker (14-10) is a redshirt-senior from East Pennsboro Area High School, and a native of Summerdale, PA. He represents Lock Haven as the No. 30 seed, and is slated to take on third-seeded Iowa State redshirt-freshman David Carr (18-1) in the first round. While Klucker has never wrestled Carr, there is a connection there. Lock Haven assistant coach Nate Carr Jr is David Carr’s older brother.

Klucker is a three-time national qualifier, making the tournament three consecutive years. He’s still seeking his first win at the NCAA Championships. He had his ups and downs this season, and went 1-2 at the MAC Championships. He’ll look to turn it up in the final tournament of his career.

Siegrist (25-11) heads into his first NCAA Tournament appearance in style, as he won the MAC title at 174 pounds last weekend. The senior out of Manheim Central High School in Manheim, PA secured the No. 27 seed in the bracket. He’ll battle Ohio State redshirt-sophomore Kaleb Romero (19-7), the No. 6 seed, in the opening round. The two have not wrestled each other previously.

Siegrist is a four-year starter for Lock Haven, and has come quite close to making the tournament in recent years. He took advantage of his opportunity at the MAC Championships, going 4-0 with wins against two fellow national qualifiers. He’s riding a five-match winning streak heading into Minneapolis.

This marks Lock Haven’s third consecutive season with five or more national qualifiers. In each of the previous two seasons, the Bald Eagles have had two All-Americans. Moore has coached four different wrestlers to a total of five All-American awards. LHU will try to outwrestle its seeds, and push that number even higher in 2020.