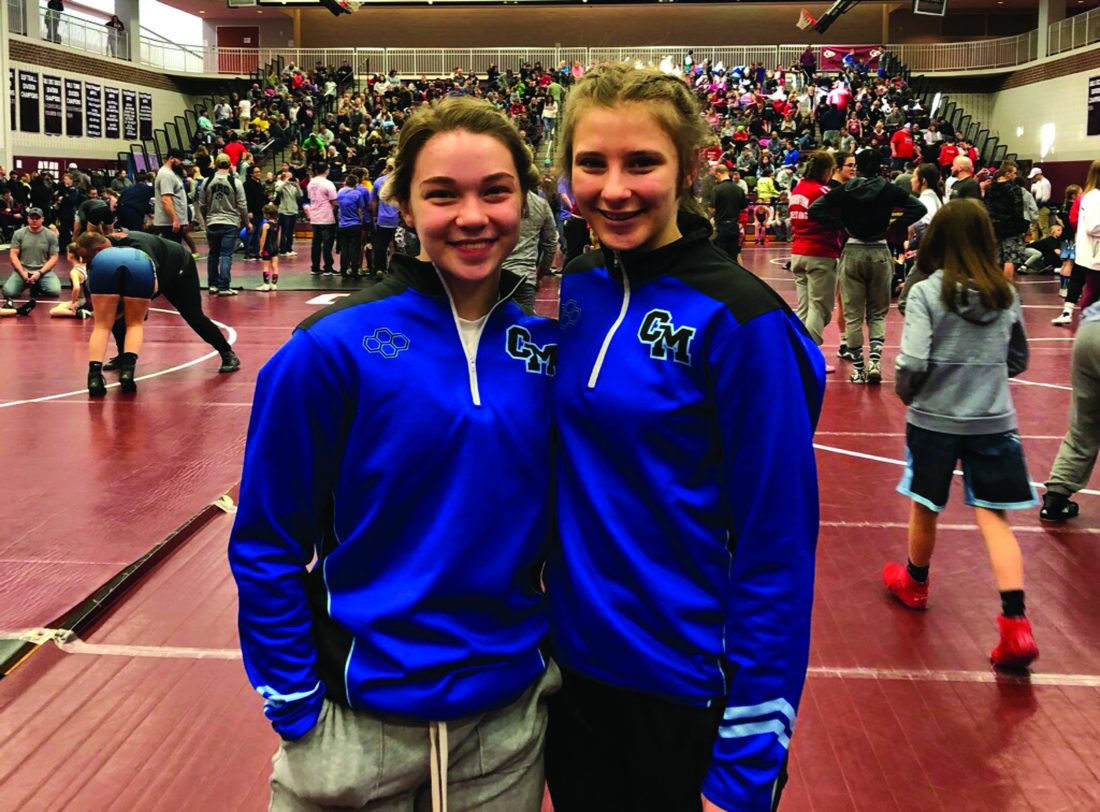 PHOTO PROVIDED Central Mountain’s very own Olivia Miller and Madison Packer smile for a photo at a wrestling meet this season.

MILL HALL- Central Mountain juniors Olivia Miller and Madison Packer signed up for wrestling this year unaware of what to expect. Neither had prior experience — but both were culturally immersed into the sport at an early age.

Miller vividly remembers watching her brothers wrestle during her youth and even wrestled alongside them in their home for fun. Packer– on the hand– descends from a long line of wrestlers from the Bald Eagle area. Her grandfather– Grant Packer– was a wrestling enthusiast along with the rest of his brothers and Packer inherited some of their passion as a child.

Packer elected to expand her background as she began her junior year in 2019. She never previously participated in school athletics before– but knew wrestling was the most enticing choice. Her family was reluctant at first, but after some persuading she became the first of two girls to sign up for the Wildcat wrestling team this season.

“I was debating for a little bit if I should sign up or not,” Packer said. “But once I made up my mind on doing it, there was no going back. I definitely had some convincing to do. My family didn’t want me to get hurt but I was confident it was a good idea.”

Packer’s addition to the team provided Miller a bargaining chip with her own parents as she reasoned with them she wouldn’t be the roster’s lone girl.

“I decided to sign up this year because I’ve always wanted to do it,” Miller explained. “And my parents finally agreed to it since I heard the news another girl was wrestling and I had told my parents that.”

Miller experienced success in the regular season and racked up a few wins against boys in JV tournaments. And midway through the season, Pennsylvania USA Wrestling, who runs the Pennsylvania freestyle program, distributed emails to all the state’s high school coaches to enquire whether they had female athletes willing to participate in the PA Girls State Championship. Miller and Packer accepted the invite and were among over 370 girls who competed in two separate tournaments at Gettysburg High School on Sunday, March 8.

” I was excited to go to states but I really didn’t know what to expect,” Packer said. “The gap in the skill level was crazy to me.”

Packer wrestled at 115 pounds and finished the day an even 2-2. She advanced to the quarterfinals and eventually fell to the wrestler who won the gold in her division.

“I went 2-2 and I am pretty happy with how it went,” Packer said. “I am not disappointed that I lost out because it’s only my first year and I am happy to get the mat-time. My goal right now is to do the best I can and I think that’s what I did.”

Miller wrestled tough but dropped her only two matches to a pair of experienced athletes at 108 pounds.

“I feel like my day at states didn’t go as I wanted it to,” Miller said. “But it just taught me what I can work on and fix. All in all it was a good day and good experience.”

The event was a new experience for each athlete as it was their first participation in a female-only tournament. Over 370 girls competed in the 2020 MyHouse PA Girls State Championship and North East Girls State Championship in Gettysburg that Sunday. The two competitions combined for 60 youth and middle school brackets, and 12 high school brackets. Both athletes were encouraged by the large support and hope over the years younger girls– who express interest in wrestling but may be reluctant to pursue a dream, become motivated to sign up.

“Wrestling may be considered a male-dominated sport but girls wrestling is growing fast,” Packer said. “Girls at any age, if they’re willing to put in some hard work, shouldn’t hesitate to start. There are lots of females that go out and rough up the boys a little bit so who says we can’t, too. I am excited to see the sport grow and I want to see lots of young girls go out and be confident that they can wrestle like the boys.”

“Just follow your heart and do it because you end up getting stronger and better in the end,” She said. ” And just think about how you’re going to be a role model to other little girls that want to wrestle.”

The MyHouse PA Girls State Championships is unsanctioned by the PIAA, but there’s a growing movement in the state for girl’s wrestling to become sanctioned. The PIAA currently requires at least 100 schools to sponsor a interscholastic sport before it considers a sanction and establishes a championship.

“I think it’s just a matter of time before it happens,” Central Mountain coach Biff Walizer said on girls wrestling becoming sanctioned. “Plenty of states around us have already taken that step and sanctioned it in their state-athletic programs. So it’s disappointing to think of Pennsylvania, being one of the leaders when it comes to wrestling, taking so long to recognize the girls’ side of things.”