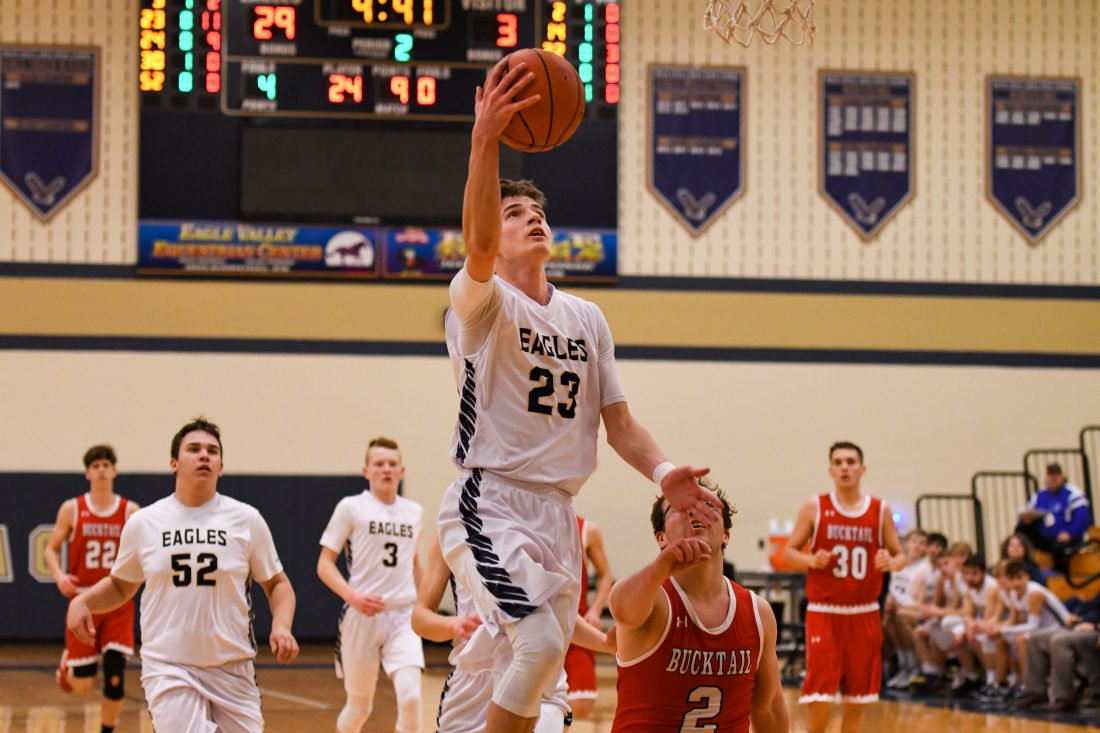 (TIM WEIGHT/FOR THE EXPRESS) Bald Eagle Area’s Jaden Jones attempts a layup against Bucktail this season. Jones has been named to The Express’ All-Star basketball team.

The high school basketball season came to an unfortunate early end due to the global COVID-19 virus outbreak but not before gracing us with some incredible area basketball over the course of the winter months. Area teams were aplenty in playoff action, while giving us some thrilling matchups in rivalry games yet again. The area will lose some incredible talent that has been showcased for the last four years as senior staples move on athletically and academically. The Express has selected some of those incredible talents for the 2019-2020 All-Star team.

Ewing dazzled his way through his senior season for Jersey Shore in a way only Ewing could. The senior, who took over the Pennsylvania Heartland Athletic Conference from the day he stepped foot on the hardwood, went out in incredible fashion as he averaged 20.6 points per game. Ewing was understandably frustrating for every opponent the Bulldogs faced as he was able to shoot from the perimeter or pump fake a defender into the air to drive to the rim. Ewing leaves his high school basketball career as the all-time scorer in program history with 1,346 points. Ewing secured the conference’s top-player recognition. Ewing, a multi-sport athlete, showcased athleticism and tenacity on both ends of the court adding two steals per game defensively.

Soo, in his senior year, led the Wildcats with 13 points per game while adding a team-high 27 three pointers in a down year for the Wildcats. He took home second-team Pennsylvania Heartland Athletic Conference recognition in the 2019-2020 season.

Soo’s leadership will be irreplaceable as the senior graduates this year. Throughout a tough season, in which the Wildcats were decimated by rough third-quarter stretches, Soo was the catalyst of hustle and energy for Central Mountain. No-quit plays, and full-court sprints on opponents’ fast breaks aren’t visible in a statistical category, or else Soo’s numbers would be out of this world.

Jones was a bright spot in the tough 2019-2020 season for Bald Eagle Area’s boys basketball program. Jones, the senior led BEA night in and night out on the court and contributed to the team across the board statistically. With six losses of single digits, Jones was the leader for the program as he has been for the past four years.

Jones led the team in points per game with 13.8. Jones also led his team in assists per game, and ravaged the Mountain League opponents with 3.3 steals per game. Jones was selected to the Mountain League’s second-team all star team as well. As a final notch in his BEA basketball success he became just the sixth member of BEA’s 1,000-point club this season.

Snyder led his Rams to a 15-8 record in the 2019-2020 season en route to three thrilling PIAA playoff matchups. The Rams, which had to win a consolation game to make a PIAA State Tournament berth, were able to do just that on the heels of Snyder and his incredible season. Snyder, a senior, reached the 1,000 point threshold in a 24 point performance in February and ends his career on the incline after contributing to the Penns Valley basketball program over the course of his high school career.

McCartney went out with a bang in his senior season, albeit in a disappointing season from a team standpoint. McCartney finished with a 26-point performance in his final game showcasing his dedication, hustle and skill that has embodied his career in a Red Raiders uniform.

McCartney, who ends his career with 1,098 points, hopes to continue his basketball career collegiately. McCartney took home first-team honors in the Mountain League in his final season.

Zane Probst, the three-sport Wildcat, continued to showcase his grit, athletic ability and skill on the hardwood throughout the winter months.

Probst took home third-team recognition from the Pennsylvania Heartland Athletic Conference while helping on both ends of the court. Probst finished second on the Wildcats behind teammate Conner Soo in points per game with 9.5.

On the defensive end Probst was a physical, big body that opponents had to get through to earn tough buckets on a nightly basis.

Probst led the team in blocks per game, and averaged 7.3 rebounds per game in dominating fashion for his final basketball season

Please take pride: Pandemic is no reason to litter