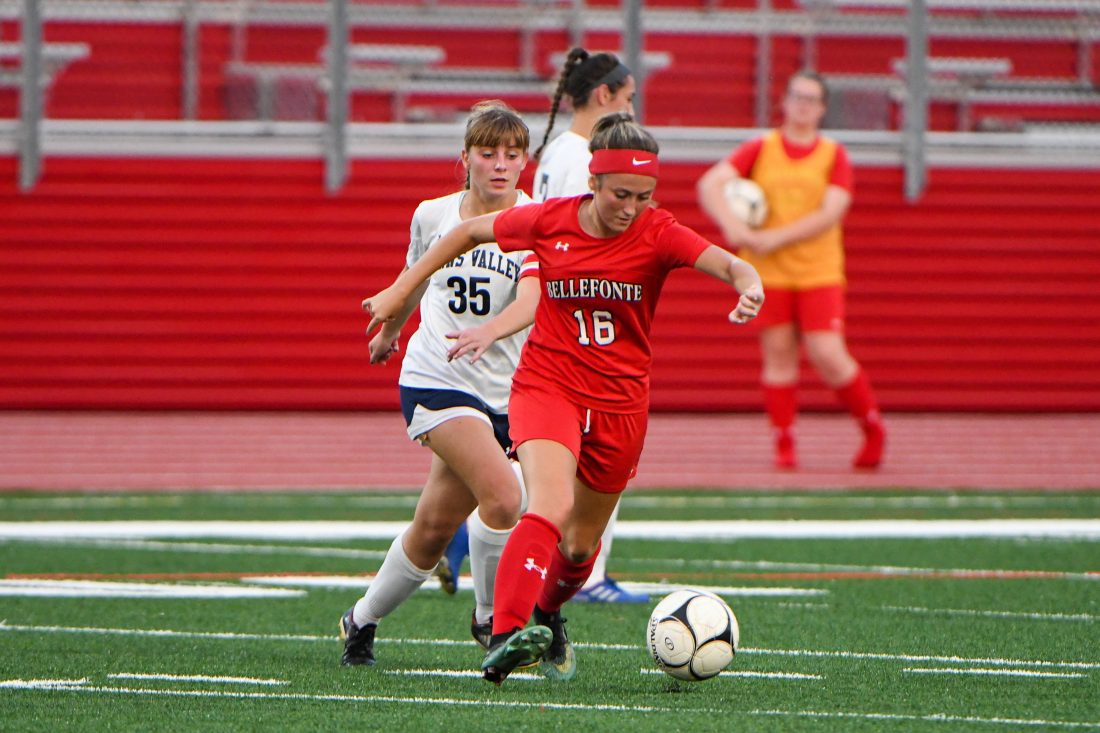 TIM WEIGHT/FOR THE EXPPRESS Bellefonte’s Mallorie Smith dribbles the ball in a high school soccer game in the fall. Smith leads the soccer program with a career-high 116 goals.

The ramifications of the coronavirus enforced a complete halt of the PIAA athletic calendar.

The Winter Championships have been delayed since mid-march, while the spring season has yet to officially commence. And with Governor Wolf ordering all schools to remain “closed indefinitely” yesterday– it appears likely that PIAA sports will be canceled for the duration of the academic year.

The road looks difficult ahead, but rather than dwell on the absence of further sports let’s look back at some of the top athletes in the Express coverage area.

Here are some of top athletes Bellefonte had over the course of the year:

Not only is Smith one of Bellefonte’s top athletes– she’s also the most prolific scorer in the area.

Smith made a living out of frustrating opponents and lighting up scoreboards. She’s an offensive-juggernaut who tallied 52% of Bellefonte’s scores over her high school career.

Smith finished her senior season with a team-high 26 goals–ending her career with a program-high 116.

When she’s not locating the back of the net she’s also an excellent facilitator of the ball. Smith led the team in assists in each of the last three seasons and accumulated 32 during her time as a Red Raider.

Smith is also a talented basketball player. She led the Raiders in assists per game and was third on the team in scoring. Her softball career might be cut short due to the spread of the coronavirus but she’ll continue her athletic career in the fall as member of the Penn State Altoona women’s soccer team.

Funk has been a complete joy to watch over these past few years. He’s one of the most polished athletes in the area and is perhaps Bellefonte’s MVP.

An aggressive-rushing attack has been the identity of the Red Raiders football team during the Shanon Manning era-and perhaps no one thrived better in this scheme than Funk.

Funk torched through opposing defenses with a strong combination of power and speed. He’s Bellefonte’s all-time leading rusher and his numbers improved each season during the progression of his career.

Funk finished his senior season with a team and career-best 1,488 rushing yards and another 14 touchdowns on the ground.

He helped lead Bellefonte to a 35-21 victory over Clearfield in the District 6 Championship. He ended that game with a 189 rushing yards and finished his football career with a program-best 3,534.

As dominant as he is on the gridiron, he’s even better on the diamond. While his senior season could be cut short– Funk will resume baseball next year after committing to the University of Pittsburgh.

Rossman was a dual-sport athlete who experienced tremendous success in both outlets.

Rossman was dominant on the mat during the wrestling season and was a major contributor to Bellefonte’s postseason success.

The junior finished first at the District 6 AAA Wrestling Championships and captured another gold in the Regional Championships at 182 pounds before advancing to the State Tournament.

Rossman’s gold medal was the icing on the cake for Bellefonte at Regionals as the Red Raiders took home the team-title after a spectacular showing. Bellefonte sent four athletes to the top of the podium and bested second place Cathedral Prep by 18 points.

Rossman was also a leader on the football team. He emerged as the starting quarterback this year and led the Red Raiders to a District Championship.