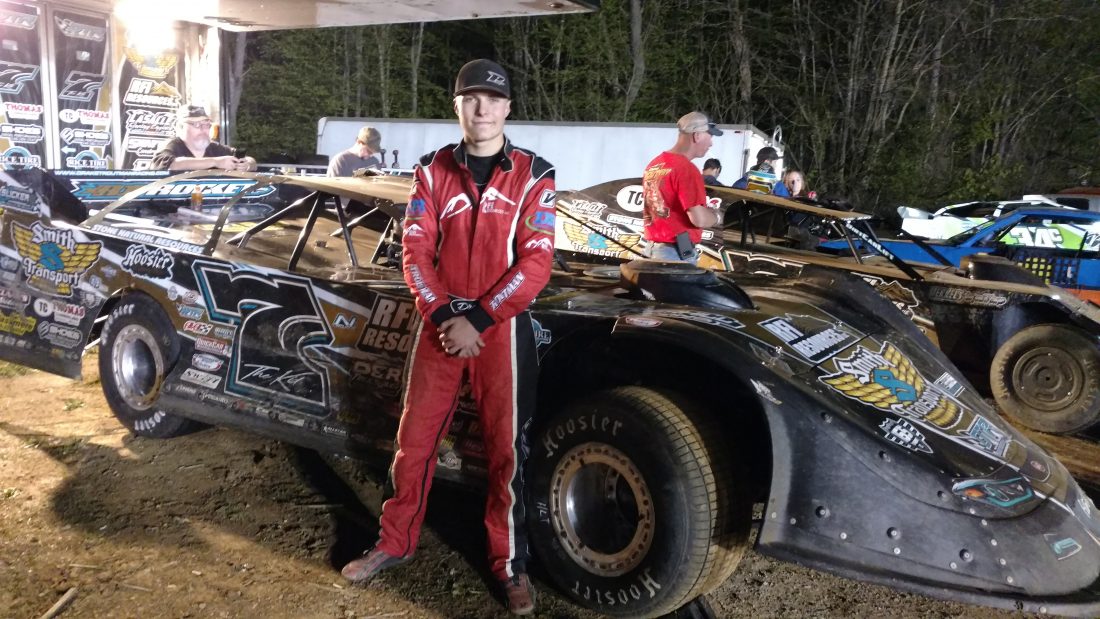 PHOTO PROVIDED Drake Troutman, a 15-year-old driver, poses with his car after winning the E-Mod feature Saturday at Roaring Knob.

Plans to continue races at this unique track are now on hold as the PSP have pulled the plug until their county moves into a green status by Gov. Tom Wolf.

Troutman, a 15-year-old from Hyndman, Pa., also went to Potomac Speedway on Sunday and picked up a back-to-back win in his E-Mod.

It was my first time there and it was worth the trip. It is a racey track and has multiple seating options for fans. You can sit in the bleachers, bring a lawn chair or stay in your car and enjoy the view from theater seating.

Then it was off to Lincoln Speedway where they had protocols in place for safety seating in order to get the OK to return to racing. Brian Montieth started on the pole of the 35-lap feature and lead it flag-to-flag.

Montieth’s significant lead was erased when the caution came out again on lap 29 as Gerard McIntyre Jr. spun out in Turn 2 and in an attempt to keep running, ended up doing some 360 spins. McIntyre collected both Shaffer and Smith who were running second and third, respectively, while spinning.

With the second- and third-place cars out of the running, the top five on the restart were Montieth, Buckwalter, Lance Dewease, Freddie Rahmer and Chase Dietz. Rahmer had made his way to fourth from his 21st starting spot and was making a move to get around Buckwalter when he misjudged his pass and spun.

With Rahmer out of contention, Montieth led Buckwalter, Dewease, Stutts and Dietz on the final restart of the race. Montieth paced the field and got an excellent jump on the restart. “The Edge” wasn’t to be denied and he took the checkered flag 1.789 seconds ahead of Buckwalter. Dewease held on for third, TJ Stutts crossed the line fourth and Anthony Macri finished fifth from his 14th starting spot to earn the hard charger award.

See you at the races.