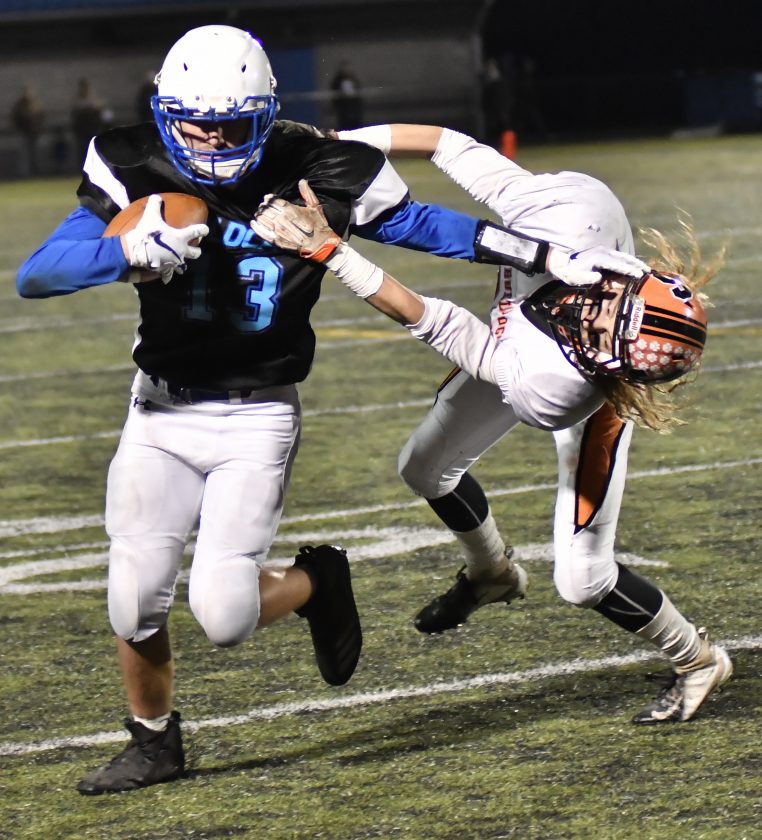 SUN-GAZETTE FILE PHOTO Central Mountain’s Zach Eck stiff arms a Jersey Shore player during a football game in 2018. Central Mountain’s coaches — from football to volleyball, basketball to soccer — are utilizing ways to keep their athletes active and motivated during the coronavirus pandemic.

In most cases, that sentiment would likely indeed be factual and many would find comfort in its reality. However, when applied to sports and a pandemic caused by the COVID-19 virus, it is fairly safe to say that in a time like this, there has likely never been a time like this.

Athletes and coaches today have not before faced the challenges that they are now facing due to the nearly complete shutdown of the sports world. Most are well aware that the shutdown of sports caused the cancellation of the spring sports season for high school athletics.

Many have discussed the impact of the shutdown on those teams and athletes. What has been much less talked and written about is the impact that the shutdown has had on those athletes and teams that treat the spring and summer months as their off-seasons.

These are the months that many coaches and athletes count on heavily to develop individual skills as well as team concepts and unity. This applies to many if not most fall and winter sports coaches, athletes and teams.

However, that was then, this is now. A new era. An era in which coaches and players are looking for ways to continue individual and team development without the opportunity to be physically together in any capacity.

Despite the limitations placed on them by the shutdown, Central Mountain coaches Friday offered their thoughts on how the shutdown has impacted their offseason programs.

“It has kept us from working out together and has taken away all opportunities to develop offensively and defensively as a unit,” Central Mountain football coach Jim Renninger said. “Football is very much about working as a unit to accomplish success on every play.”

“The shutdown has completely altered our plan from the time of its inception,” Central Mountain volleyball coach Scott Garman said. “Fortunately, we were able to get about half to two-thirds of our club season in before tournaments were canceled and our practice facilities closed.

“Most of our teams got at least two tournaments in during that time span from January to mid March. We obviously can’t do any group workouts or open gyms at the school or any other facilities due to social distancing and mandated regulations. We would have begun these at the conclusion of club season, starting in early April.”

Central Mountain boys basketball coach Tyler Bardo said, “The shutdown has eliminated a lot of on-court opportunity. March is a big month for our Junior High (program) as we put nearly all of our resources into that month for players at that level. With no clinics or camps, we are looking hard at ways to still offer some things to our youth programs as well once we return. It hasn’t been all negative though.

“The staff and myself have been able to get some professional development in and refine things that could really benefit our guys. I’m not one that really has an ‘off’ switch as I’m constantly working with players both in and out of our program. So while we aren’t able to be on the court, we are still finding ways to get better.”

Not having workouts and practices is something Central Mountain boys soccer coach Billy Hook also noted.

“It has obviously altered it (off-season program) completely. We would have been having multiple workouts per week since the beginning of April, so this sets us back quite a bit,” Hook said.

Regardless of the circumstances, each of the coaches has been attempting to find alternative activities to keep their athletes and teams moving forward in this most trying of times.

Renninger said that he and his staff have provided daily workout activities through videos and installed portions of their offense and defense through video chalk talk.

Garman’s methods were a bit different, as he noted that they hold a team Zoom meeting Mondays to talk about issues, such as how everyone’s doing personally, setting goals individually and as a team for the upcoming season and figuring how how to work toward said goals.

“We would also share about our daily workouts from the previous week. Before letting them go, I would assign them accountability partners in groups of two or three for the upcoming week so that they would connect with each other three to four times and touch base about how their workouts are going and how they’re holding up to keep them responsible for each other as well,” Garman said.

Garman noted that he posts workouts on the team’s Facebook page of things the girls could do related to volleyball during the pandemic to keep their skills up and improve areas of their game.

“We are looking forward to hopefully at least getting outside to play in the grass and sand this summer,” Garman said.

Bardo also has been developing and providing workout logs for his basketball players so they can track skills and physical development and the mental side of basketball for both varsity and JV players.

“We have done a book discussion and are currently holding positional film-study Zoom meetings to build basketball IQ,” Bardo said. “Those that have been able to participate have really made our return to the gym one of great anticipation when it happens.”

Hook said that he has been encouraging his players to do their best to stay active, such as going for runs if they can or juggle a soccer ball.

“Anything to keep them from sitting still. It’s all we can ask for,” Hook said.

This is truly an unprecedented time for coaches and athletes. Many attempts are being made by the coaches to find creative ways to connect with their athletes and teams. It is almost certain though that despite any and all attempts that coaches might make during this time, what is ultimately going to be the difference maker is how creative the athletes are able and willing to be during the time.

What is heartening though is knowing that the choice for success rests with each individual athlete. This time can and likely will be huge in separating the doers from the talkers. The doers will take advantage of the opportunities that their coaches provide and will even look for other ways to develop themselves as better athletes and players.

As for the talkers? They will see this time as one big vacation. Again, the choice is each individual’s to make. However, the choice that they make will likely have lasting consequences. Hopefully, most if not all will make the right decisions during this time and will come out of it better than when it started.

Surely that is each coaches hope.