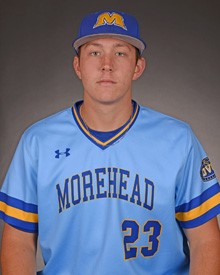 Central Mountain graduate Alex Garbrick is transferring from Morehead State University, where he was a pitcher on the Eagles’ baseball team. The right-hander who was the ace pitcher for Keystone Little League’s run to the 2011 Little League World Series, announced Monday he’ll play his final two years of eligibility at the University of South Carolina-Upstate.

“I decided to transfer because I was just looking for a new opportunity and situation and wanted to experience a different situation and place during my college baseball career,” Garbrick said.

Gabrick returned to college this year despite being drafted by the New York Yankees in the 2019 MLB Amateur Draft. After spending last summer playing with the Hyannis Harbor Hawks in the Cape Cod Baseball League, Garbrick returned to Morehead State where he went 1-2 with a 6.14 ERA in four games before the COVID-19 pandemic canceled all NCAA spring sports.

Garbrick graduated from Morehead State on Saturday and made the announcement of his transfer Monday on Instagram. He’ll see some familiar faces at USC-Upstate in Spartanburg, South Carolina. Coach Mike McGuire was in his first year with the Spartans after spending seven seasons as the head coach at Morehead State.

“I was very comfortable playing for them and I had a good relationship with all of them,” Garbrick said.

In three seasons at Morehead State, Garbrick compiled a 7-8 record with a 5.76 ERA. He also struck out 111 batters in 104 2/3 innings. In four games this spring, Garbrick averaged 11 strikeouts per nine innings.

“I want to pursue a one-year master’s degree in business analytics that I should be able to finish next summer,” Garbrick said. “Baseball-wise, I just want to continue to get better as a pitcher and help the new team win a conference championship and put myself in the best position possible to get drafted again after next season.”

Garbrick will be immediately eligible to play in the spring because he’s a graduate transfer having already earned his bachelor’s degree from Morehead State. Because the NCAA is granting each spring athlete from this year an additional year of eligibility, Garbrick will have two years of eligibility remaining at USC-Upstate.