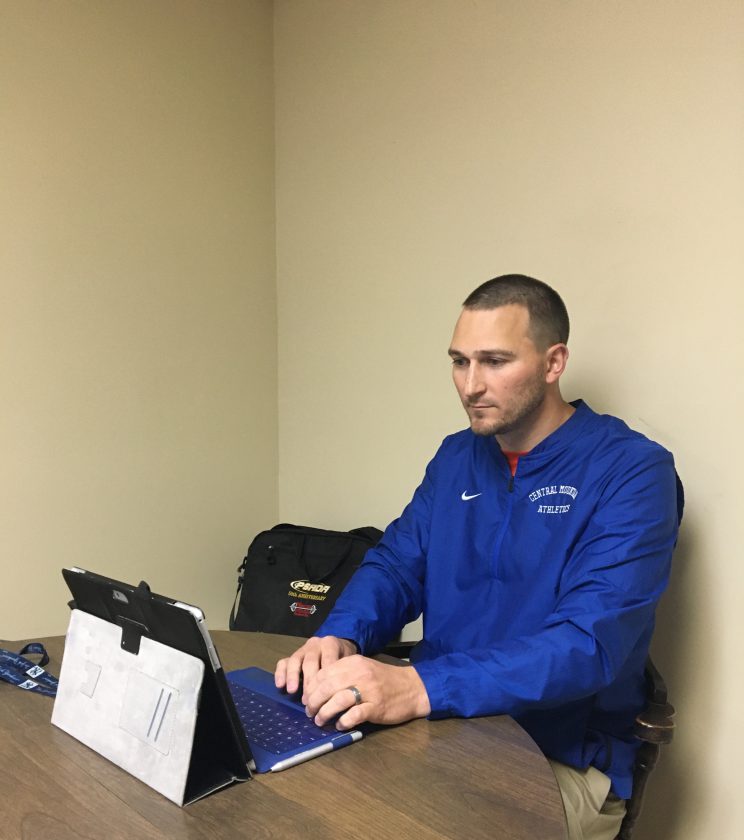 George Bidwell has been the athletic director overseeing Central Mountain and Bucktail for the last five years. Normally this time of year, Bidwell would be preparing for the postseason of spring sports. However with the PIAA’s cancellation of all spring sports in response to the COVID-19 pandemic, Bidwell’s job looks a bit different these days.

Bidwell said that the mandated postponement of sports caused a bevy of issues that needed to be rather quickly navigated.

“When the decision to close schools was made by Gov. Wolf on March 13, our spring sports teams were scrimmaging and preparing for their first competition the following week,” Bidwell said. “Our fall and winter sports teams were conducting offseason and strength and conditioning workouts. I was taking phone calls and answering questions the best I could and then figuring out my next steps to communicate the governor’s order with everyone.”

He went on to address the challenges associated with the shutdown.

“The most challenging thing was not knowing what the future held for spring sports. The first announcement came on March 13 to close schools until the end of March. The second announcement came about a week later to close schools until mid-April,” Bidwell said. “During those closures I was postponing contests. However, I was hesitant to reschedule for a few reasons.”

The reasoning behind that was he didn’t know how many additional preseason days that the PIAA was going to mandate for the athletes and he didn’t know what direction the PHAC would be taking in terms of rescheduling conference games. He also didn’t know if another announcement would come to announce the cancellation of the entire season.

The announcement to close schools until June 30 came during the first week of April and Bidwell was in a tough position to relay the news.

“I was absolutely devastated. I understood the decision why and the reasoning for it, but sharing that message with our student-athletes and coaches was pretty difficult,” Bidwell said.

Bidwell acknowledges that he has no idea what the future holds and whether or not fall sports will begin on time or at all. Regardless, he says that he is continuing to plan for those sports to begin as originally scheduled in mid-August.

Bidwell commented on a few other things that he has been doing over the course of the past two months to continue to advance and promote the Central Mountain and Bucktail sports programs.

“I’ve been virtually meeting with 40 to 50 AD’s from across the state via Zoom every Friday. Chris Weakland and Loren Crispell from State College organized the initiative and it’s growing by the week,” Bidwell said. “It’s a great opportunity to meet and discuss the experiences we’ve had thus far with COVID-19.”

Central Mountain and Bucktail participated in the “Be the Light” Campaign. It’s an initiative to show our support for the class of 2020, as well as medical professionals and first responders on the front lines battling COVID-19. Fridays at 8:20 p.m., the schools turn on the lights at both Malinak Stadium and Dwyer Field for 20 minutes.

Bidwell noted that this past week, he switched venues and had the lights on in the Central Mountain High School gymnasium and thanked those who provided support, from teachers, the administration and the school board.

He also has helped organize virtual senior days for Central Mountain and Bucktail’s senior athletes who didn’t get a chance to finish their seasons this spring. Those videos have been created and distributed through social media and uploaded to YouTube.

“I’ve been in contact with Rick Wire from Dynamite Sports. Mr. Wire has come to CM a few times in recent years and has presented a recruiting seminar for our student athletes,” Bidwell said. “He has decided to conduct virtual seminars at no cost to student-athletes across the country, so I’ve been encouraging our student-athletes to participate. CM had 21 families attend the first seminar, which was the second highest total in the country.”

In terms of facilities, Bidwell has continued his ongoing efforts in conjunction with property services to see to the replacement of the artificial turf at Malinak Stadium. After Thursday nights KCSD school board meeting, he happily stated that they are planning on replacing the turf.

Keystone Sports Construction, a company based in Exton was the winning bidder and will thus be doing the work.

“We felt very comfortable with what they brought to the table and feel confident they’ll give us a product that is high quality, safe and durable. Also included in their bid package was equipment to be used at Bucktail to improve and maintain the quality of grass on their athletic fields,” Bidwell said. “I’d like to thank Ms. Martin, Mr. Pacella (Director of Property Services), administration and the board of directors for recognizing the needs and supporting the improvement projects of our athletic facilities throughout the school district.”

While every coach has goals for their individual teams and programs as a whole, the athletic director is charged with setting goals and philosophies for the district’s athletics programs as a whole. Bidwell says that his goals in that regard moving forward are the health and well-being of all.

“My number one goal moving forward is figuring out what athletics is going to look like not only at KCSD, but also across the state of PA, because what was considered normal before will no longer be considered normal,” Bidwell said. “I’m not only talking about coaches and athletes and precautionary measures taken in practices, but at contests as well. What it will look like for event staff, security, concession stand workers, spectators and seating. That’s a tough task that lies ahead for all athletic administrators. Obviously that’s not something I can do on my own as I’ll be seeking guidance and direction from the PIAA and their Sports Medicine Steering Committee and utilizing the recommendations and guidelines set forth by them.”

With so much uncertainty on a day-to-day basis with everything, not just sports, no one really knows what the future holds for the resumption of school and or sports. However, Bidwell was challenged and asked to look into a crystal ball to explain what the future might hold.

“I’m not insensitive to everything surrounding COVID-19, but I’m a planner and in this situation you have to be,” Bidwell said. “I can’t predict the future and what the PIAA is thinking, but I’m preparing for athletics to take place as scheduled. At this time, the school district is closed until June 30 and it’s my hope that coaches and athletes can return to offseason activities as early as July 1.”

During this uncertain time, Bidwell has been busy with maneuvering through the obstacles of the pandemic. These things are in addition to the many regular responsibilities that he has which include providing guidance and direction to student-athletes, coaches, boosters and parents/guardians pertaining to the athletics program.

That role also includes ensuring the athletics program is compliant with school district, PHAC, PIAA and NFHS policies and guidelines at all times which includes student-athletes, coaches and their individual programs and booster clubs.

The job of an athletic director continues even further with having to prepare budgets, allocate spending and approve purchases for all athletic programs, preparation teams, creating schedules and transportation, assigning officials, assigning game workers, postponing and rescheduling contests when weather becomes an issue, coordinating facility use for team practices and games as well as other school district activities and non-school district activities.

The role of an athletic director is not limited to just scheduling and watching games. It is a job that is expansive,time consuming and done by someone that all coaches rely on to assist them and their teams to be as successful as possible.

Let’s all hope that Bidwell’s crystal ball and planning meet and we can get back to some local sports action in the fall as we have all been so accustomed to for so long. And when the games resume and you see Bidwell on his post watching, remember that much work was done behind the scenes to allow the games to go on.