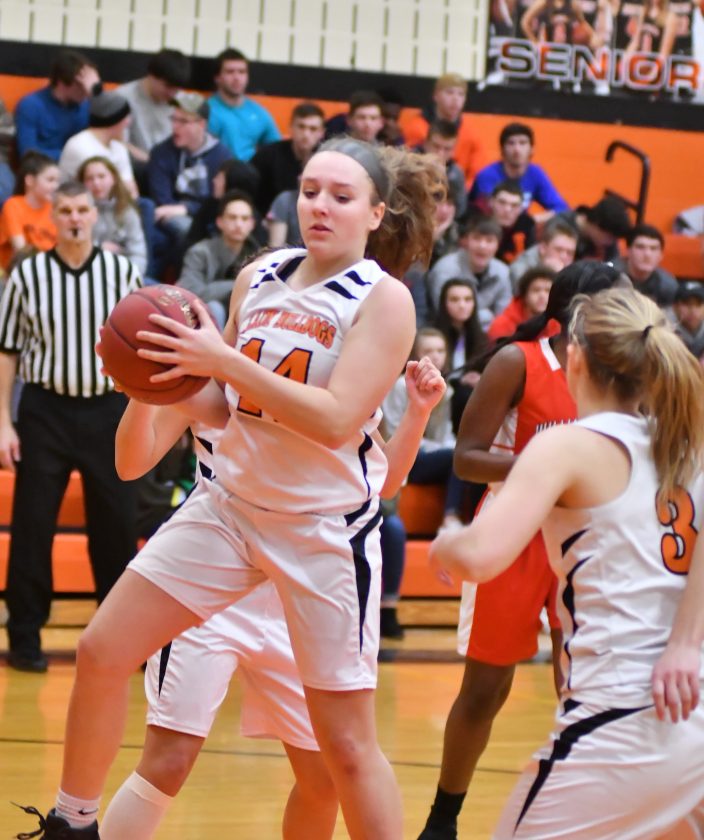 SUN-GAZETTE FILE PHOTO Jersey Shore’s Aubrey Stetts grabs a rebound against Williamsport during a game her sophomore year in 2017-18. Stetts is going to play women’s basketball at Penn College.

Penn College’s women’s basketball team has become somewhat of a District 4 all-star team recently. Glance at their roster and you’ll see plenty of familiar names jump out from teams in the district the past few seasons.

At any given time during the season, Penn College’s lineup is majority District 4 alumni and this upcoming winter, the Wildcats will get one more familiar District 4 face that area basketball fans will recognize.

“I am anxious to meet and play with these girls as I’ve always played against them,” Stetts said. “I think it will be a great experience being on the same team.”

Kuhns, Klock, Albert, Wolfe and others all gelled well on the court for Penn College last year, and Stetts’s playmaking abilities and versatility should be a great addition to a program looking to get back to winning.

Last year, Penn College went 7-17, a six-win improvement from the year prior, and ended the season winning two of its final three games against Gallaudet and Wells College, both on the road. The seven wins are the most since a 13-12 campaign in 2014-15.

“The school of Penn College has always appealed to me regarding academics and athletics, and after talking to coach (Britni) Mohney, the women’s basketball team seems like it would be a good fit for me,” Stetts said.

Stetts continuously got better each year. She went from averaging 4.2 points per game as a sophomore to 8.3 her junior year and was the only Jersey Shore player last season to average double-figures in scoring with an impressive 13.9 points per game.

She also led the team in assists per game (1.5) while having 4.1 rebounds per game and 1.2 steals per game as a captain her senior season.

She was a Lock Haven Express and Sun-Gazette all-star selection this year, and was a first-team HAC-I all-star.

Stetts scored 305 points this past season in 22 games. Her 13.9 average led the Bulldogs.

“Early on in my career I played as a guard on the wing. Then I moved to a post position, and the last two years of my career I filled the position as a point guard,” Stetts said. “I seemed to fill the position the team needed in any given year. … I did take pride that I could play any position on the court.”

Like any college program, that versatility of Stetts should be beneficial when the winter season rolls around, especially with some of the talented players she’ll be playing along with at Penn College.

As to what Stetts feels is her best attribute aside from being a scoring threat, she noted it was a little bit of everything.

“My versatility on the court, my attitude towards a new coach and players and my hustle,” Stetts said. “I hope I will be a great addition to the team.”

Given what she did in her career at Jersey Shore, she should definitely be a solid addition for the Wildcats.