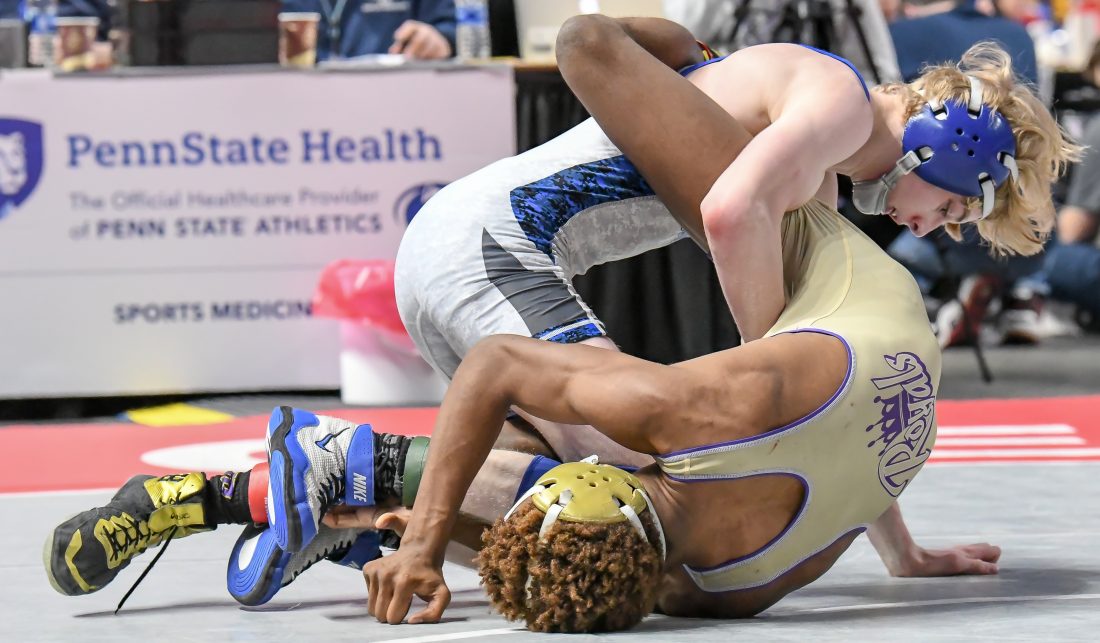 SUN-GAZETTE FILE PHOTO Central Mountain’s Derek Keen tries to put Upper Darby’s Keito Shaw on his back during their 113-pound bout at the PIAA Class AAA Wrestling Tournament in Hershey this year. While wrestlers such as Keen at 113 won’t be affected by the new PIAA weight reduction plan, the upper weights will be changed to 172, 189, 215 and 285.

In a surprise move Wednesday, the PIAA Board of Directors chose to pass on a first reading of the proposed change to 13 wrestling weight classes. Instead, the board voted unanimously to have the PIAA’s Sports Medicine Advisory Committee (SMAC) review the proposed weight class changes for safety.

It was expected the board would approve the weight class change after the PIAA Wrestling Steering Committee recommended the change by a 13-1 vote at its April meeting. But the steering committee also had discussions about wanting to get as many sets of eyes on the potentially new weight classes as possible before it was approved, according to PIAA Executive Director Dr. Robert Lombardi.

The hope is SMAC will make their review of the proposed weight classes so the proposal can be brought back in front of the board during it’s June meeting.

“They will meet and decide what they decided and suggest what they suggest and then we’ll take it back to the board,” Lombardi said. “(The wrestling committee) wanted a review from the medical experts in sports medicine, and some of them have a pretty storied history in wrestling itself. I think they want to make sure the weight classes are going to do what they’re intended to do.”

The change proposed by the steering committee would keep all weight classes the same from 106 through 160 pounds. But it would then condense the upper five weight classes into four. The new upper weights would be 172, 189, 215 and 285.

The PIAA was expecting to get some direction this year from the NFHS on weight class suggestions, but in its April meeting, the country’s guiding force on high school sports tabled its discussion about weight classes. The PIAA wrestling steering committee’s recommendations came a year after its initial proposal on new weight classes called for a reduction to 12.

But District 4 wrestling chairman Dave Campbell said after the steering committee’s meeting there was no interest from the committee to move to 12.

“This idea actually came about two years ago to reduce weight classes and it was tabled at the national level,” the PIAA’s Chief Operating Officer Mark Byers said. “The idea was to garner more information from the state organizations and they would come back with a new proposal in 2019. But none of the state associations submitted any proposals. So we submitted a proposal for 13 weight classes for the NFHS at its 2020 rules committee meeting which was not approved.”

One wrestling item which was approved by the Board of Directors will give both District 2 and District 4 an extra qualifier for the Class AA Northeast Regional tournament. Previously, District 4’s top-five finishers and District 2’s top-three finishers advanced to the regional. But a motion presented by Campbell in the steering committee meeting asked for one more regional qualifier from each district based on the region having the same number of schools as the Northwest Region, which is given 10 regional qualifiers.

The board also approved a motion which would allow teams to begin holding summer workouts when Gov. Tom Wolf and the Pennsylvania Health Department give the OK for organized sports to be held in a county. The PIAA had previously mandated teams could begin holding workouts, as long as they stayed within authorized PIAA guidelines, on July 1.

With the motion which was passed Wednesday, workouts could begin even sooner if the governor and health officials determine it is safe to hold organized sports activities.

“We have to follow what the governor says, and that’s our primary deal here. And this is only my personal opinion, but if athletes or students are allowed to participate by the guidelines set forth by the governor, I don’t care what the date is, they should be able to go out and do what they want to do,” said District 11 chairman Bob Hartman, who brought forth the motion. “In any phase, green or yellow, if it’s permitted, we should allow it. It’s not there right now, but we shouldn’t pigeon-hole ourselves to a date. If it’s permitted, let’s allow it.”

“I was really happy the board stood up and told people this is important to us. We care about the kids. We want the kids to do what they like to do and be kids, play athletics and be a representative of their school,” Lombardi said. “I’m just going to follow the governor’s guidance. We said it’s July 1, but it could be earlier depending on the decision that are made.”