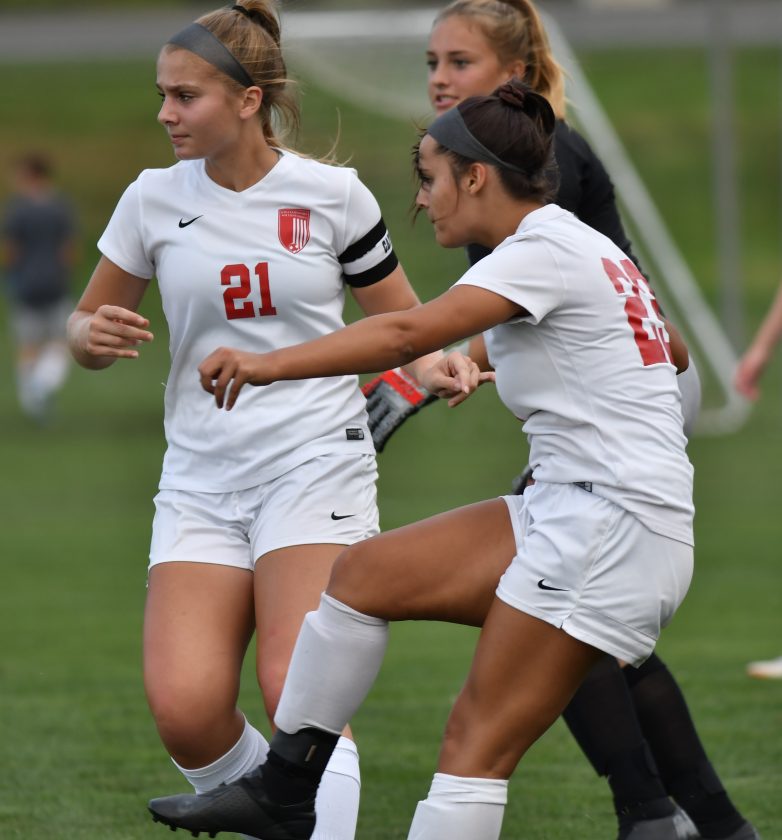 SUN-GAZETTE FILE PHOTO Williamsport’s Angelina Morrone (21) and Lila Vogelsong (rear) look on as teammate Talia Lewis (23) kicks the ball against Montoursville last season at McCall Middle School. Morrone and Vogelsong will play together at Lock Haven University this fall after spending four years together as teammates with the Millionaires, where they won four consecutive district championships.

During a game last fall, Lock Haven University women’s soccer coach Maggie Kuhn attended a Williamsport contest to watch goalkeeper Lila Vogelsong. As the two were talking, Kuhn asked Vogelsong if there were any teammates she should keep an eye on during the game.

It didn’t take long for Vogelsong to quickly point out her teammate Angelina Morrone, one of the anchors of the backline for the Millionaires. She told Kuhn that Morrone was her favorite defender to have out on the field with her.

As fate would have it, Vogelsong will get her favorite defender on the field with her for another four years.

“It’s so nice knowing that I have someone on the team that I know and it’s my defender from my school,” Vogelsong said. “That just comes with a sense of security.”

“I’m super excited that I’ll have someone I know and will play another four years with her,” Morrone said.

Given that they are a goalie and defender, they have a somewhat special bond. Vogelsong loves knowing that Morrone can help clear out any ball and help provide a last line of defense. Conversely, Morrone loves how fast of a player Vogelsong is to act on any ball that gets near.

“Every time we make a play, we’ll say good job to each other. Every time we score a goal, we celebrate together,” Vogelsong said. “Just being on that end of the field is really bonding and brings us together.”

It’s a sentiment that Morrone echoed for their relationship given their positions.

“Being a goalie and defender, being so close and having each other’s back and doing that next year as well is nice,” Morrone said.

Vogelsong and Morrone helped build a legacy at Williamsport for the girls soccer program. They helped the Millionaires become winners and became district champions four times, the first time in program history they ever won four consecutive championships.

That’s something that stands out for both players.

“It was a big legacy for us and I think we’ll always have that and be super excited about it,” Morrone said.

“We’ll definitely go down in history for that,” Vogelsong said.

Both said their respective programs they’ll be pursuing — Morrone is going to be a physician’s assistant and Vogelsong will major in education — attracted them to Lock Haven.

Lock Haven has struggled this past decade, having just one winning season in the 2010s which came in 2018. Other than that, Lock Haven has won six or more games just five other times.

But if anyone has a great resume to bring to the field, it’s Vogelsong and Morrone who don’t know what it’s like to have a losing season or not win a championship.

The Williamsport duo both bring speed with them onto the field, and both were quick to point out each other’s strengths.

“She’s really quick and agile and she just goes for everything,” Morrone said of Vogelsong. “She’s really committed and she’s a very strong player.”

“I think her best quality is her ability to just get the ball out of the danger zone,” Vogelsong said of Morrone’s strength. “She’s really quick to attack and she has no hesitation on the field.”

And those skills can be a huge advantage for the Bald Eagles defensively as Lock Haven allowed 15.5 shots per game last year and 2.35 goals against per game.