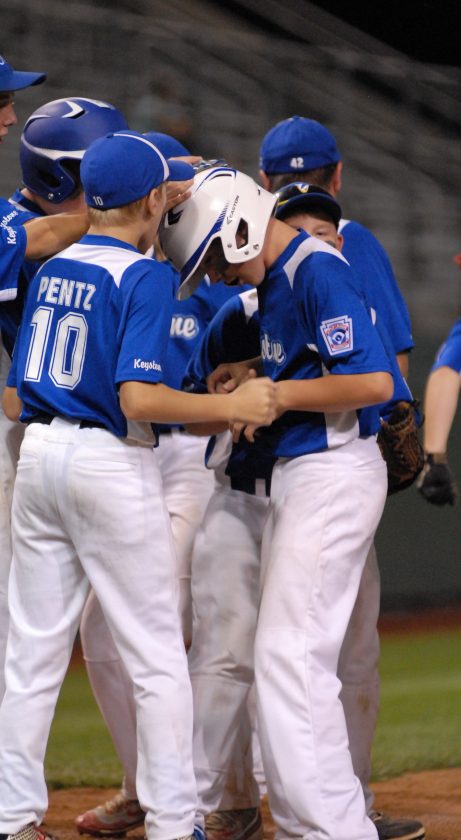 LH EXPRESS FILE PHOTO Kaden Falls celebrates with his Keystone teammates during the District 12 championship game at Volunteer Stadium in 2016 after hitting a home run. Four years later, Falls is still thriving under pressure as part of Central Mountain’s summer league team. Falls came up big on the mound Thursday, stranding the game-tying runner at second base in an exciting 6-5 win over Hughesville.

Trailing by two runs, Central Mountain loaded the bases late Thursday against Hughesville. Kaden Falls nearly cleared them, slamming a game-tying, two-run ground-rule double. Only a bounce over the left-field fence prevented Falls from giving his team the lead.

An inning later, Falls took the mound, retired the first two batters, then stranded the game-tying runner at second base as Central Mountain edged Hughesville, 6-5, tying it for first-place in summer league action.

If Falls was sweating it was only because the temperature hovered around 95 degrees. Inside he was as cool as the Arctic Ocean. The Central Mountain senior-to-be has performed in front of millions watching worldwide so there is not much which can faze him.

Falls was one of the most valuable players on the 2016 Keystone Little League team which reached the Mid-Atlantic championship and was a victory from playing at the Little League World Series. Endwell, New York, the eventual world champion, ended Keystone’s season, but that experience taught Falls a lot about performing in pressure situations and he continues thriving in them.

“That experience has helped a lot,” Falls said. “It teaches you to keep your confidence and keep your cool and always stay focused on your task.”

“He gets in those situations and he handles them well,” Central Mountain coach John Herman said. “From when he first started playing ball till now he’s always had that chip on his shoulder. He’s always going to do what he can do and do it the best he can do it.”

Falls always giving his best has made his teams batter at every level along his baseball journey. He played a major role for that memorable Keystone team, providing stellar pitching and defense as well as being a rock of consistency in the middle of the lineup. He hit .312 with a .500 on-base percentage at the 2016 Mid-Atlantic regional and was outstanding against world champion Endwell, striking out 11 in five innings.

As many highlights as Falls and his teammates generated that summer, one memory stuck most with him. It had nothing to do with wins, playing on ESPN or fanfare either.

“The main lesson I learned from that experience was it is all about hard work,” Falls said. “Our team worked so hard to get where we were. To see how it played out, it couldn’t have been a better year.”

Now Falls is translating youth success to high school. He appeared poised for big things this past spring before the COVID-19 pandemic erased the season. As a sophomore in 2019, Falls hit .324 and compiled a .452 on-base percentage. He also struck out 11 in 15 2/3 innings.

Falls is talented and versatile enough to play all over the field, including in the outfield or infield. He played center field, second base and pitched against Hughesville and went 1 for 2 with two RBIs, a walk and a stolen base.

“He’s a grinder,” Herman said. “He and (fellow senior-to-be) Peyton Johnson work well with their teammates and are always pushing them.”

Falls can lead through words and action and Central Mountain liked it chances when he came up in the fifth inning, having the tying runs in scoring position and the go-ahead run at first base. Falls patiently worked the count, first to 2-0 and then 3-1.

He had the pitcher right where he wanted him and Falls unloaded on a 3-1 fastball, driving it toward the left-field fence and tying the game. Johnson hit a sacrifice fly a batter later as Central Mountain took its first lead.

“In my head I was just saying, ‘stay calm,'” Falls said. “I had been a little riled up the last few weeks and was just getting back to my basics and staying simple and was able to help pull one out for the boys.”

Falls was called on to close out the game in the sixth inning and induced two quick groundouts before leaving the game-tying runner stranded at second with right fielder Dallas Alexander making an outstanding game-clinching catch. It was another all-around clutch performance, but also just Falls being Falls.

Millions of people watching or just a few, it does not matter. Falls embraces the big-game moments and often owns them.