MARK NANCE/For The Express Braylynn Corter, second baseman for Mill Hall, tags out Hughesville’s Jacob Cordon at second base on a steal in the third inning Thursday at Turbotville’s Moser Complex. 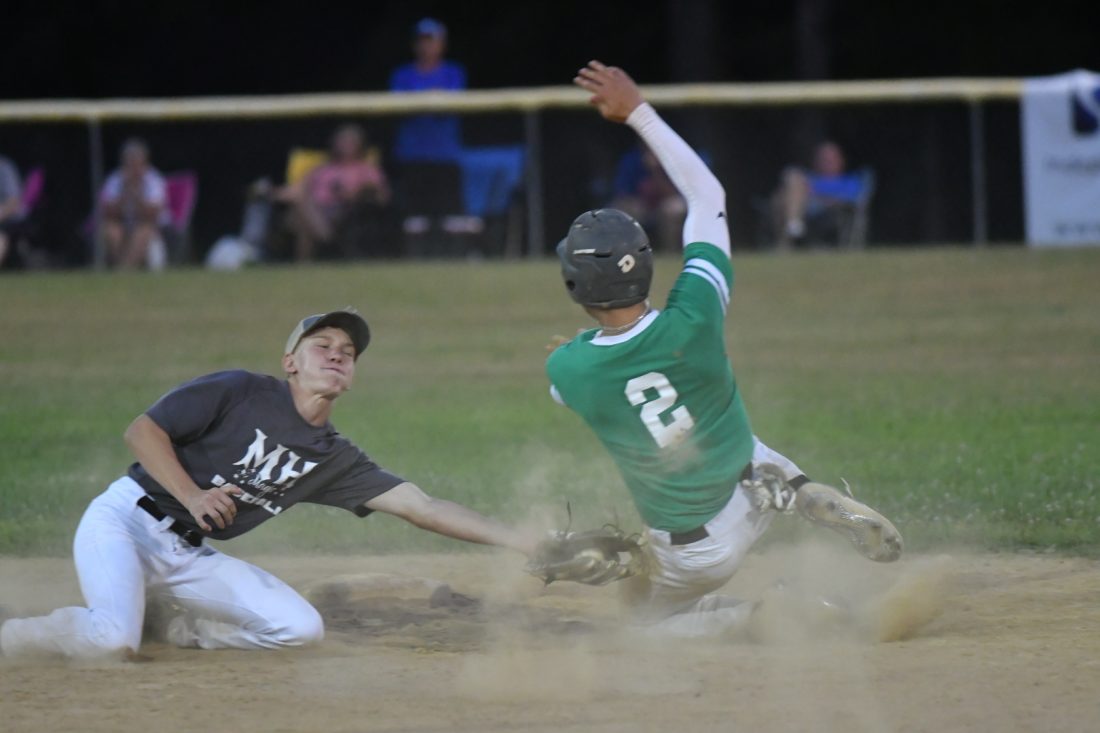 MARK NANCE/For The Express Braylynn Corter, second baseman for Mill Hall, tags out Hughesville's Jacob Cordon at second base on a steal in the third inning Thursday at Turbotville's Moser Complex.

That fastball exceeded the speed limit all night at the Moser Complex and Webb looked like a smaller version of Randy Johnson, blowing it by hitters all night. Webb threw six shutout innings, allowed just two hits and struck out a career-high 13 as Hughesville clinched the top seed for Saturday’s Summer League Tournament while finishing the regular season 11-1.

The 6-foot-2 left-hander used his two and four-seam fastballs to produce quite a memory in the final game he will pitch for Hughesville. Thursday’s game was played under the lights and the spotlight shined bright on Webb who let just two runners reach third base before exiting after closing the sixth inning with his 13th strikeout on his 100th pitch.

“That’s what we were preparing for all season, to play under the lights. It’s always a great atmosphere playing under the lights,” Webb said. “Nothing will ever make up for losing our season but this was pretty fun and it was great being out there and having a great team behind me.” 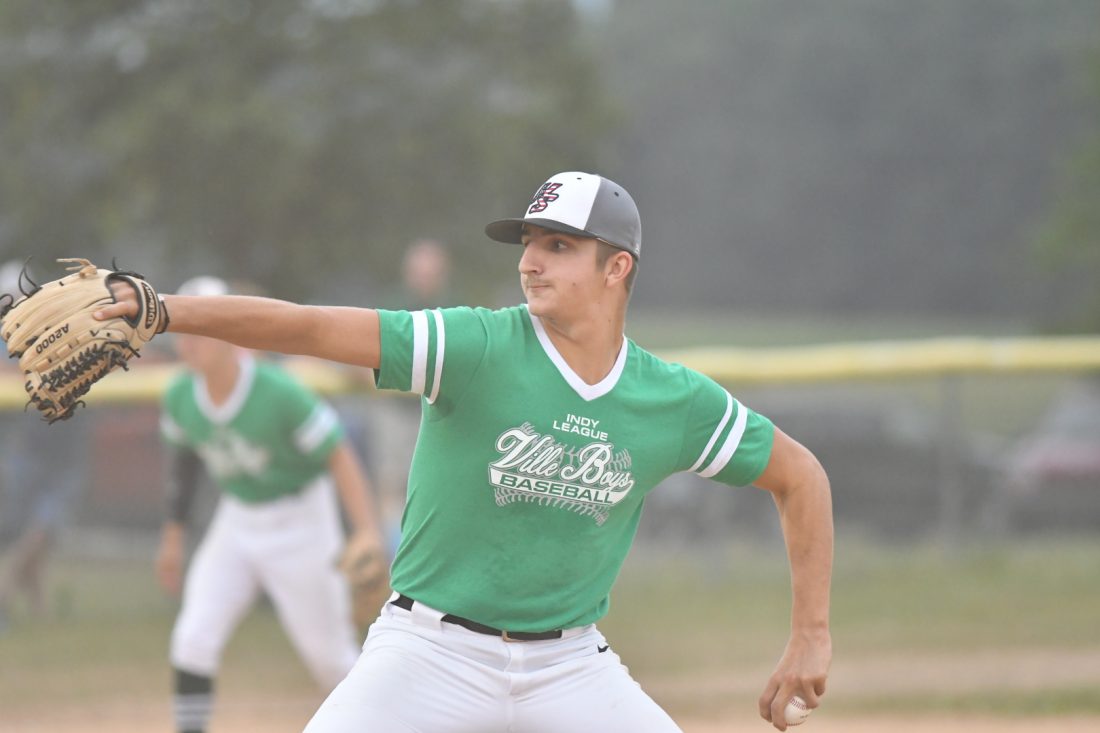 Jacob Corson went 3 for 3 with a home run, double and three RBIs and Hughesville built a 3-0 second-inning lead which was never seriously threatened.

Hughesville had high expectations for the spring high school season before it was erased due to the COVID-19 pandemic. It has spent the summer showing how dangerous it may have been and enters Saturday’s tournament riding a six-game winning streak.

Hughesville will play No. 4 Warrior Run at 10 a.m., at Reed Field in Hughesville with No. 2 Mill Hall facing No. 3 Loyalsock in the following semifinal at 12:30 p.m. The consolation game will be played at Reed Field following the Mill Hall-Loyalsock game with the championship tentatively scheduled for 3:30 p.m. at Bodine Park.

Webb’s brilliant performance allowed Hughesville to keep all its remaining pitchers available for Saturday. Mill Hall (9-3) loaded the bases in the first inning, but Webb ended the inning with a strikeout on his 30th pitch. He started dominating the following inning with he and catcher Chase Bremigen (2 for 2, RBI) working in harmony.

Webb wanted to work faster following that opening inning and Hughesville coach Chris Kish gave he and Bremigen the green light to call their own game. They dialed up fastballs about 70% of the time and Webb brought more heat than usual while consistently put those fastballs wherever he wanted them.

“His fastball was electric tonight. He had so much zip on his fastball,” Kish said. “That’s probably the hardest I’ve seen him throw. He had really good arm slot and his pitches have really good run on them.”

“My 2-seam and 4-seam were really working tonight,” Webb said. “I felt like I had more on it tonight. I was able to spot and it locate it and I felt like I was in a groove.”

The offense started grooving in the first inning when Devin Maciejewski singled, following an error, and Corson belted an RBI double. Clayton Poust added an RBI grounder which made it 2-0 and Hughesville added another run an inning later on three walks and an error.

Mill Hall, however, stayed in the game and both Cru Stover and Gabe Johnson did a nice job limiting damage through four innings. Corson, however, provided the cushion Hughesville needed in the fifth inning, slamming his 2-run home run over the fence in the deepest part of center field. Brandon Derrick followed with a single and both an error and Bremigen’s RBI single made it 7-0.

The way Webb was throwing that seven-run advantage looked more like 70.

“I felt like when we got to five I took a big, deep breath,” Kish said. “Three made me a little nervous, but then Jacob comes up the next inning and slams the 2-run home run and it kind of opened it up and I felt kind of good after that point.”

Knarr was outstanding in the seventh, closing out the win. The junior right-hander threw a hitless inning and struck out two.

“He’s a budding player for us that has a great opportunity going forward for us,” Kish said. “He throws strikes and he pounds the zone. He’s continuing to get more arm strength and he drops down a little bit and he’s deceptive because his ball also has a lot of run on it. He will be a guy going forward on Saturday and also into next year that we fell good about.”