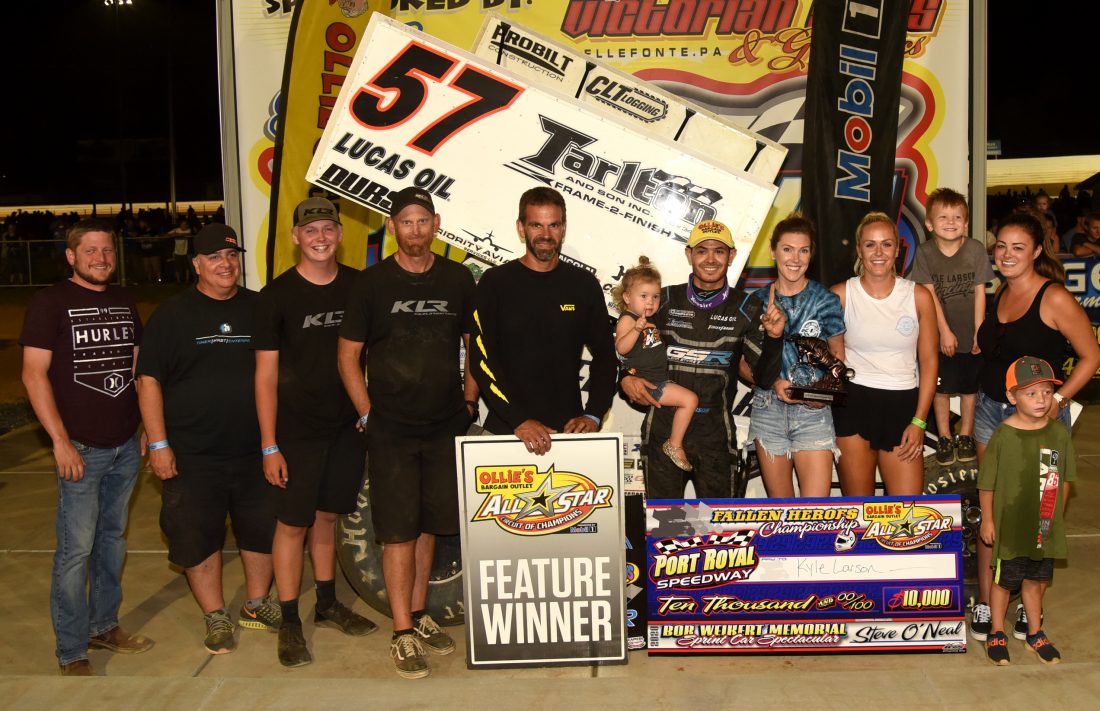 PHOTO PROVIDED Kyle Larson poses with his family and crew after winning the sprint car A-Main 30 lap feature at Port Royal Speedway this past weekend. Larson also won the day prior at Williams Grove in the 30-lap 410 sprint race.

It was a big weekend for racing fans and racing drivers alike, and the happiest person had to be Kyle Larson. He has to be the most talented driver with the happiest kids getting to go to Victory Lane to pose with their dad and all the trophies he’s been collecting.

The weekend started Friday night where he raced with the All-Stars Circuit of Champions in the Tommy Hinnershitz Classic taking a $5,000 payday at Williams Grove. Then it was a short trip to Port Royal Speedway for the two-day Bob Weikert Memorial paying $10,000 to win Saturday and Sunday with a $5,000 bonus if you could win both nights.

They don’t call him “Young Money” for nothing.

“Port Royal is starting to become one of my favorite tracks,” Larson said. “And the atmosphere here is right up there with the Knoxville Nationals.”

The Outlaws are coming to town this week, making a stop at Lernerville Speedway on Tuesday night and then Lincoln on Thursday night before the two-day show on Friday and Saturday at Williams Grove.

In the big super-late model ranks, it was BAPS Motor Speedway to the rescue when Gregg Satterlee rolled in Saturday night with a little bit of extra motivation. Satterlee and his team were on point all night and wired the field to capture the 30-lap super-late model portion of the York County Nationals.

Adam Campbell started seventh on the grid and rocketed to the front to take the win in the limited-stock main event. Sunday it was a case of some races being won with setup and some won with motor. The fifth Bob Hilbert Sportswear Short Track Super Series was won by Billy Pauch Jr.

After a phenomenal battle with Matt Sheppard and Stewart Friesen, Pauch Jr. grabbed the $5,050 payday and his second consecutive STSS Velocita-USA South Region victory. He also took home a pair of Oakley sunglasses.

Down at Lincoln Speedway, World of Outlaws regular Carson Macedo invaded the pigeon hills Saturday and led all 35-laps of the Outlaw tune-up to win $10,000. The Gettysburg Clash on Thursday has Macedo poised to be a threat to score a win for the Outlaws as they take on the PA Posse.

The winged super sportsman last raced at Lincoln in 2017. Saturday night they were back in action as part of their Touring Series. Russ Mitten beat Kenny Edkin to the checkered flag by 0.413 seconds. John Edkin crossed the line third. Frankie Herr, the all-time leader in sportsman wins at the track, finished fourth and Scott Dellinger took fifth.

Steve Drevicki added his name to the prestigious list of midget winners at Lincoln with his win Saturday. The list includes Parnelli Jones, Van May, Rico Abreu and Jimmy Maguire to name a few.

In other local action after three consecutive weeks without racing, it was finally time to get back to the track for the third night of racing Saturday at Hummingbird Speedway.

It was a special night at the track as they honored the late Tommy Scott with the running of the 2nd annual Gateway Special Memorial. Scott was a long-time friend and supporter of the speedway, as well as a former driver, car owner and mentor to many local drivers throughout the years.

Those two specials were run alongside our other three regular divisions. Feature winners on the night included: David Scott in the BWP Bats super-late models, Tim Bish in the Homak Penn-Ohio pro stocks, Nathan Smith in the Swanson Heavy Duty Truck Repair semi-late models, Tim Steis in the Sunny 106.5 FM pure stocks and Blake Joiner in the Lockwood Processing four-cylinders.

Lock Haven’s Jeffrey Weaver had a triumphant night winning the 270- and 600-micro sprint feature events and Luke Hoffner was victorious in the four-cylinder division.

Jim McBee shocked the crowd as he scored a big win in limited competition at Bedford on Friday. The win came in the make-up feature for the class after rain washed out the original July 10 event. For McBee, a three-time late-model winner at the track, it was his first Bedford win since this 1982, and his first win anywhere in over 25 years.