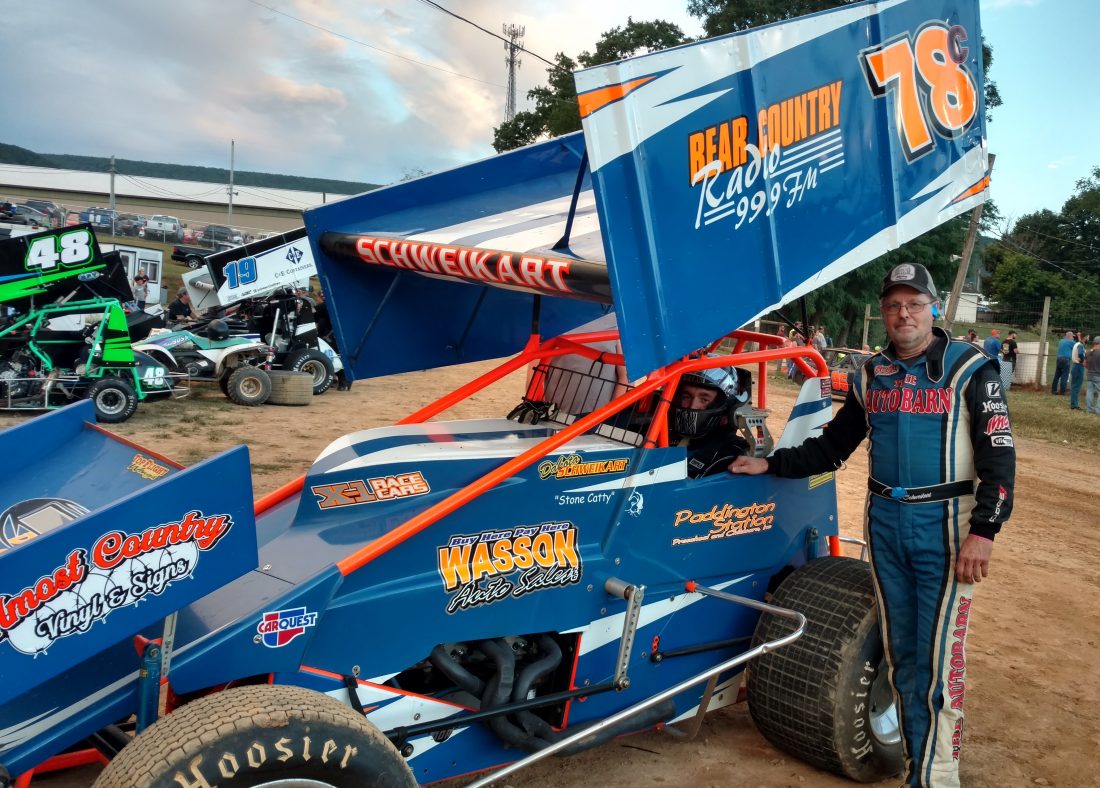 PHOTO PROVIDED Linden’s Dale Schweikart stands next to his car as his son, Dakota, sits in the driver’s seat at Clinton County Motor Speedway on Friday. He won thanks to a last-lap pass to win the Laurel Highlands RaceSaver sprint car feature by .202 seconds for his second win of the season.

At Clinton County on Friday night Dale Schweikart of Linden made a last-lap pass to claim the Laurel Highlands RaceSaver sprint car feature by .202 seconds over Jared Zionkowski. It was his second win of the season.

At intermission, kids bicycle races were held. The winners were Evendale’s Dylan Martin (6 and under), Milesburg’s Takoda Ripka (7-10) and Loganton’s Keron Yerger (11-15).

The Speedway returns to racing Friday for another five-division racing program with limited-late models, pro stocks, 270 micro sprints, 600 micro sprints and four-cylinders. Gates will open at 5:15 p.m. and racing will begin at 7:30.

In the 25-lap URC sprint feature, Anthony Macri of Dillsburg took a convincing victory after wrestling with Josh Weller for the lead.

Williams Grove Speedway will host the All-Stars Circuit of Champions sprint cars as they compete in the Tommy Hinnershitz Classic against the Pennsylvania Posse Lawrence Chevrolet 410 sprint cars race Friday.

On Saturday, it was a battle with Mother Nature at Selinsgrove Speedway with Ryan Kissinger of Bloomsburg scoring the biggest win of his sprint car career by emerging victorious in the 20th annual, 30-lap National Open for 360 sprint cars worth $5,000.

After a week off, Selinsgrove Speedway will return to action on Saturday, July 25, with the Jeff’s Auto Body and Recycling Center Summer Championships for the Modern Heritage 410 sprint cars and the super-late models, plus racing action that includes the annual A & A Auto Stores Roadrunner 20.

At Lincoln Speedway, Freddie Rahmer lined up ninth for the 30-lap feature on John Gleim Excavating Night. Rahmer reeled in early race leader, Billy Dietrich, in lapped traffic to take the lead and cruised to his third win at the track this year.

This Saturday, Lincoln Speedway is back in action with Pepsi Night. The 410 sprints will compete for $10,000 in the Outlaw Tune-up presented by Freedom Off-Road. Super Sportsman (Touring Series) and Midgets will also be in action.