Wait-and-see approach by PIAA is a good decision 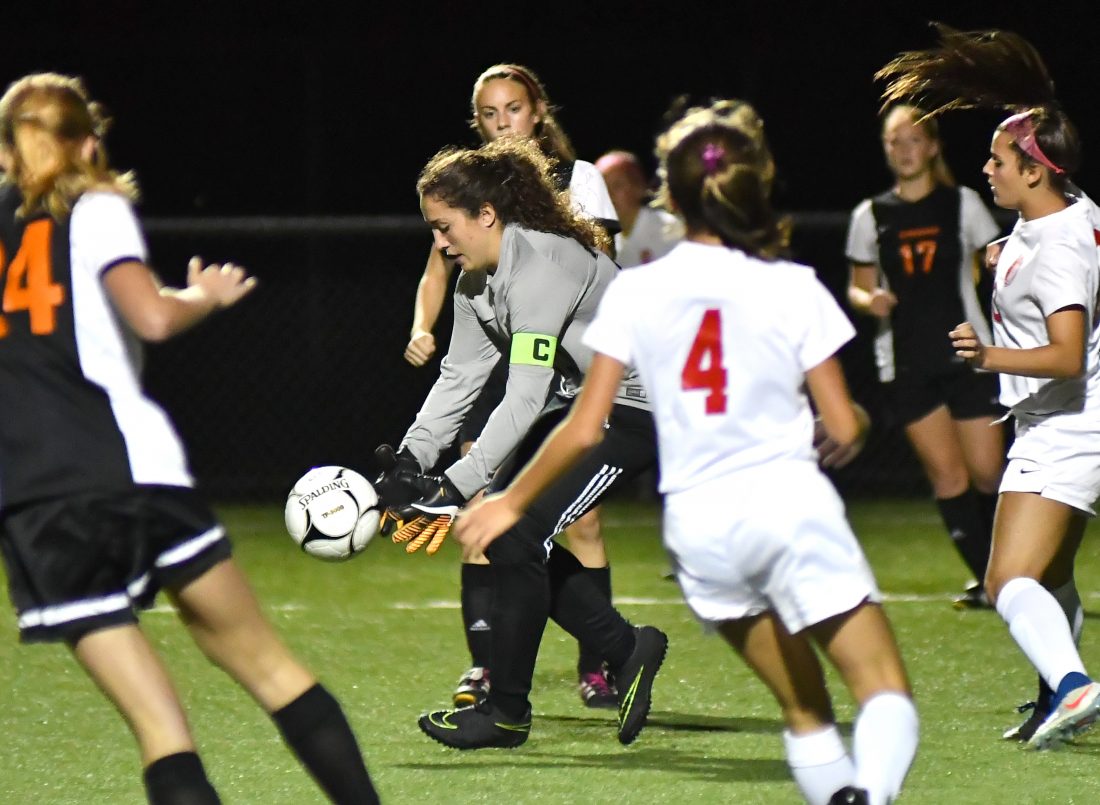 LH EXPRESS FILE PHOTO Jersey Shore’s Hannah Kauffman grabs a ball during a soccer game at the Balls Mills Soccer Club in Williamsport against the Millionaires in 2017. The PIAA is “staying the course” when it comes to fall athletics and isn’t canceling anything yet. The PIAA is using a wait-and-see approach, which is a good decision for fall athletics.

When the Ivy League canceled its fall athletics last week due to the coronavirus pandemic, my first thought was ‘here comes the domino effect.’

After all, the Ivy League was the first domino to fall in March which ultimately set the precedent for spring competition being called off. Shortly after that announcement, the NCAA men’s and women’s basketball tournaments were canceled, the NCAA axed the wrestling championships and just about every conference in the next few days canceled spring sports. Then it was the PIAA suspending its remaining state basketball playoffs and swimming competition. It wasn’t too much longer before spring sports were ultimately canceled.

Just a few hours after the PSAC’s announcement on Wednesday, the PIAA had its monthly Board of Directors meeting where it was going to discuss fall athletics briefly.

Thankfully the PIAA said it was going to “stay the course” with football heat acclimatization for Aug. 10 and was moving forward as planned with the rest of fall sports.

“PIAA is moving forward with the normal start of the fall sports season unless otherwise directed by the Commonwealth,” the PIAA said in a statement released Wednesday afternoon. “Our focus is the health and safety of student athletes which is paramount in moving forward with athletics. Each member school has developed health and safety guidelines to allow athletics to continue as an important part of the school day.

“Participation in athletics has known health benefits, including promoting physical fitness and mental wellness which is necessary in a time of uncertainty for our student athletes.”

The PIAA deserves a round of applause for not making a leap this early and canceling another season for high school kids.

None of us know what the social landscape is going to look like in the next six weeks before the first week of high school football starts Aug. 28. None of us have a crystal ball. But much like Little League International did for as long it could, the PIAA is going to wait and see how things develop.

“The state playoffs are on the books as of now. It’s a little premature to make decisions in July about December, but we’re planning on having a full postseason as it is today,” PIAA Executive Director Dr. Robert Lombardi told media members in a Q&A session Wednesday.

Lombardi said if there needs to be any sort of adjustments, such as if a school decides not to play, the PIAA can alter schedules, shorten seasons or reduce the number of PIAA qualifiers.

Lombardi and the PIAA easily could have just said they didn’t think at this point it would be safe to play and cancel fall athletics, using the college conference’s cancellation as a model to follow. But instead, the PIAA is waiting it out to see how things develop once August gets closer.

Ultimately the decision could be out of the PIAA’s hands if Gov. Tom Wolf and/or Pennsylvania Secretary of Health Dr. Rachel Levine make a ruling that prevents athletic competition at some point between now and then, or if they close schools.

But currently the PIAA wants to “stay the course” and do its best to be able to have a fall season and allow thousands of high school kids the chance to get out and compete once again.

And that’s good to see.