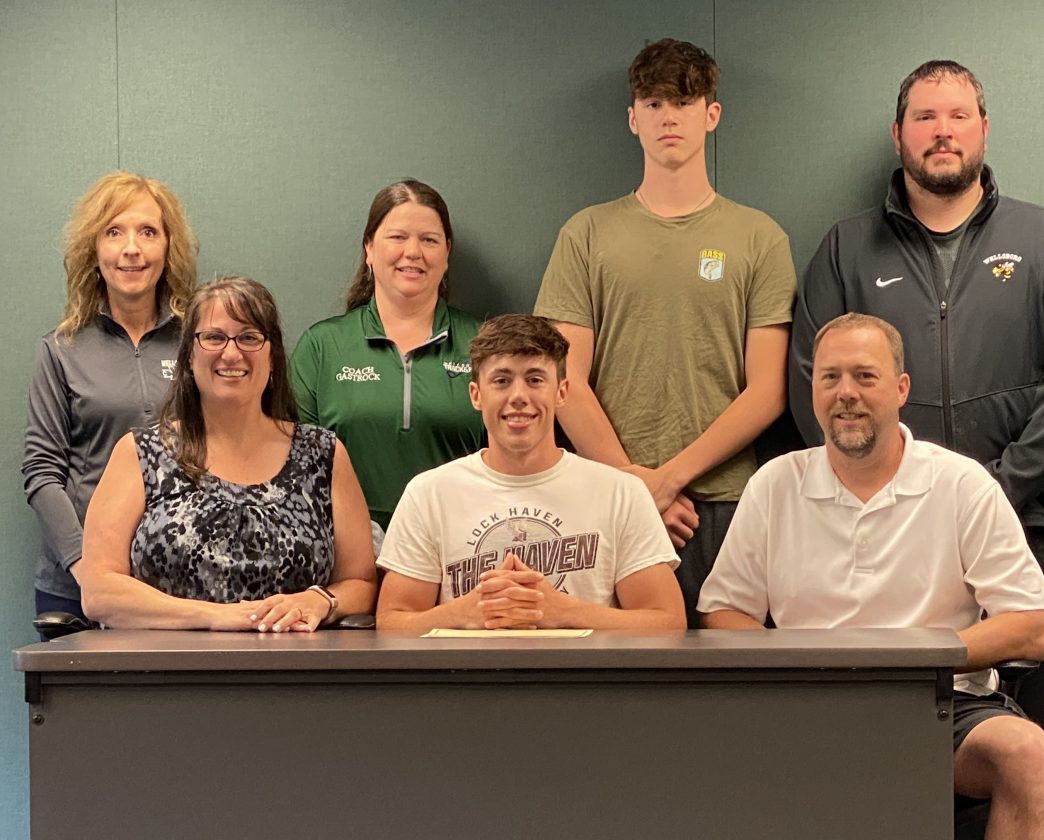 PHOTO PROVIDED Wellsboro’s Austin Richards, center, signed his letter of intent to compete in track and field and cross country at Lock Haven University. Seated next to him are his parents, Barb and Jason. In the back row are, from left, Wellsboro cross country coach Karen Hoose, boys track and field coach Jill Gastrock, brother Matt Richards and Wellsboro athletic director Ed Weaver.

Austin Richards was more than ecstatic when he got accepted to his dream school at Iowa. Deep down though, he had a feeling he wouldn’t be able to compete there in athletics. He was a track and field and cross country standout with the Green Hornets and was hoping to compete at the next level.

It was around time he was accepted to Iowa that he was also accepted at Lock Haven. And it was Lock Haven assistant track and field coach Aaron Russell who sent Richards an email inquiring more about him.

Unbeknownst to Richards was that Russell also happened to be the cross country coach at Lock Haven and asked Richards if he’d also like to run cross country. Competing in two sports in college? Richards was all for that.

“Sports were definitely the biggest part of me choosing Lock Haven over the other schools,” Richards said.

Richards will be heading to Lock Haven this fall to compete in cross country and also track and field. In track and field, Richards competed in the 1,600, 3,200, 3,200 relay and threw the javelin. He hit a PR in the javelin as a junior of 150 feet and last summer, was throwing upwards of 160 and 170 feet as he was entering his senior year.

He had a personal best of what would have been roughly 17:25 in the cross country, but the course was .2 miles shorter due to a bee nest, meaning it wasn’t regulation and therefore, an unofficial time.

Richards is the first to admit he had no idea how to throw a javelin when he started as a sophomore. He simply tried throwing it as hard as he could and hoped for the best. Eventually he got more used to it and ended up qualifying for districts that first year.

“I didn’t throw well at all under all the pressure of being there at districts, but I wasn’t mad because I was proud to even be there,” Richards said.

Richards tore his labrum in his throwing shoulder before his junior year, making him doubt if he’d ever be able to throw again and compete in an event he started to enjoy and love. He started rehabbing with physical therapy and after a handful of weeks, he won the Northern Tier League title with his personal-best throw of 150-0 and secured the seventh seed at the District 4 meet.

He didn’t place at districts — “My steps were so messed up and it felt like I had forgotten all my mechanics” — but it gave him motivation going into his senior season. Unfortunately, due to the coronavirus pandemic, that never happened and he didn’t get a chance to possibly place at districts for the first time and qualify for the state meet.

Richards had been practicing at a javelin camp as well, learning from talented throwers to better his ability.

“I was throwing 170 feet when I left,” Richards said. “I was ready to win districts and go to states this year, but we never got the chance at track season.”

While the COVID-19 pandemic took away his senior year, it didn’t mean his athletic career came to an end. Not only is Richards excited to compete at Lock Haven University, he’s looking forward to competing in two sports at the collegiate level.

“I am honestly a little nervous seeing as the competition is a lot harder than what I am used to,” Richards said. “It does feel great to see all my hard work and dedication paying off.

“With all this coronavirus stuff, I am not sure what is gonna happen. Hopefully all goes well and I can get on campus and begin my training and lifting to be the best I can there.”

Richards knows that he not only will have tough competition at Lock Haven among his cross country and track and field teammates, but he’ll also be competing against solid athletes in the PSAC. It’s something he’s looking forward to and is embracing the fact he’ll be pushed to be better and compete.

“I know as an athlete that everyone wants to win. The only thing is not everyone’s a winner, those that work hard at something are rewarded with success,” Richards said. “Especially in college, they are all really great athletes, so I know I will be pushed harder than I have ever been before. I know they will definitely push me to be my best and I can’t wait to be at my best.”