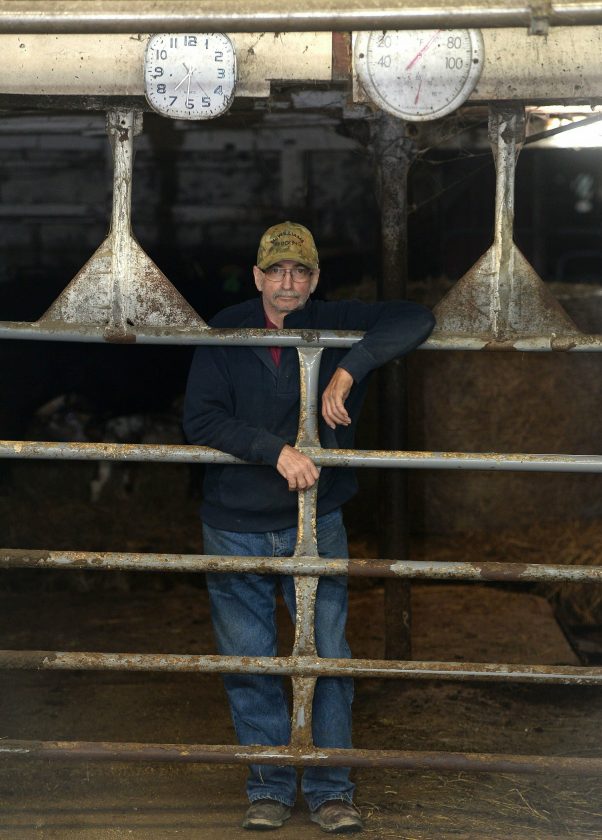 Dean Curtis is shown April 11, 2019 in the empty milking parlor at his farm in Venango Township, Erie County, Pa. Curtis sold his 150 dairy cows in June 2018, shutting down a family dairy farm that had been in operation since 1931. (Jack Hanrahan/Erie Times-News via AP)

WATTSBURG, Pa. (AP) — Dean Curtis didn’t need to see the results of the U.S. Census of Agriculture to know what’s happened to the region’s dairy industry.

Curtis, who started working alongside his father at the age of 10 and began running his own dairy farm in 1972, decided years ago that family-owned dairy farms were in trouble.

He tried to head it off.

Curtis, who is 67, paid attention when industry experts said dairy farmers needed to get bigger or get out. Twenty years ago, he was milking 150 cows and ranked as one of Erie County’s larger dairy operations.

But size didn’t save him.

On June 23, the second day of summer 2018, he and his wife, Suzanne, sold their cows and their farm machinery, shutting down a dairy farm that’s been in his family since 1931.

Numbers released Thursday by the U.S. Department of Agriculture make it clear the Curtis family is part of a larger pattern.

What the numbers don’t show is something that Curtis, whose farm closing isn’t even counted in those numbers, sees daily as he rumbles past abandoned dairy barns in a gleaming tanker truck. He has a new career as a milk-truck driver, delivering to Dean Foods Co. in Sharpsville, Mercer County, the same company that used to process his milk at Meadow Brook Dairy in Erie before it closed in 2018.

The pace of farm closures has only accelerated over the past year since Dean Foods shuttered its Erie plant and told more than 100 dairy farmers in eight states it would no longer buy their milk as it waited for Walmart to bring a processing plant of its own online.

Curtis and his wife had everything to lose. It’s different for many local farmers. It’s clear from the most recent Census of Agriculture that farming is a part-time pursuit for many. In the 2012 agricultural census, fewer than half identified themselves primarily as farmers. That question wasn’t asked in the most recent survey, but the numbers paint the same picture. Of Erie County’s 1,162 farmers, 537 reported farm income of less than $5,000.

But that doesn’t mean the farmers were getting rich. Curtis explained the problem during a 2009 interview when milk prices were at a low point.

“We have long-term debt, and we have short-term debt,” he said at the time. “Our cash flow is nonexistent, and we are kind of running on credit.” Like many farmers, he had looked at his livestock as an investment he would sell one day and use to fund his retirement.

The reality fell short of those dreams. The proceeds from his auction paid some but not all of his bills. He’s still working 60 hours a week and is thinking about selling some of his land to pay off the rest.

The proceeds of his auction were a disappointment.

The decline of the local dairy industry, gradual between 2012 and 2017, more rapid since, hasn’t been good for anyone, said Mark Muir, a Union Township farmer who raises sheep and beef cattle and serves as president of the Erie County Farm Bureau.

“It’s a spiral,” he said, one that drives down the price of beef each time a struggling dairy farmer sells an old dairy cow for hamburger.

“It’s pretty challenging,” he said of the agricultural landscape. “Interest rates are going up. Your inputs are going up. It doesn’t pay. A lot of people are trying niche markets, but it’s really tough to make it happen.”

Muir, who is 64 and has been farming for 40 years and works off the farm to cover his health insurance, has been more successful than some.

Curtis wishes he could say the same. It wasn’t so much quitting that he minded.

“It was the idea that we had to quit,” he said. Instead, he’s driving from one remote farm to the next as he zig-zags the countryside, tracking down the remaining dairy farmers who do business with his company.

“You would not believe the miles you have to drive to fill a truck,” he said. “I’ve driven that truck 40,000 miles since November.”

Cows roam his farm, but they don’t belong to him. He’s leased the barn and the land to another farmer.

Standing in his empty milking parlor, Curtis is reminded of the memory of feeling like he had no other choice but to quit.

“I couldn’t even come in here for two weeks after the sale,” he said. “It was just too tough.”