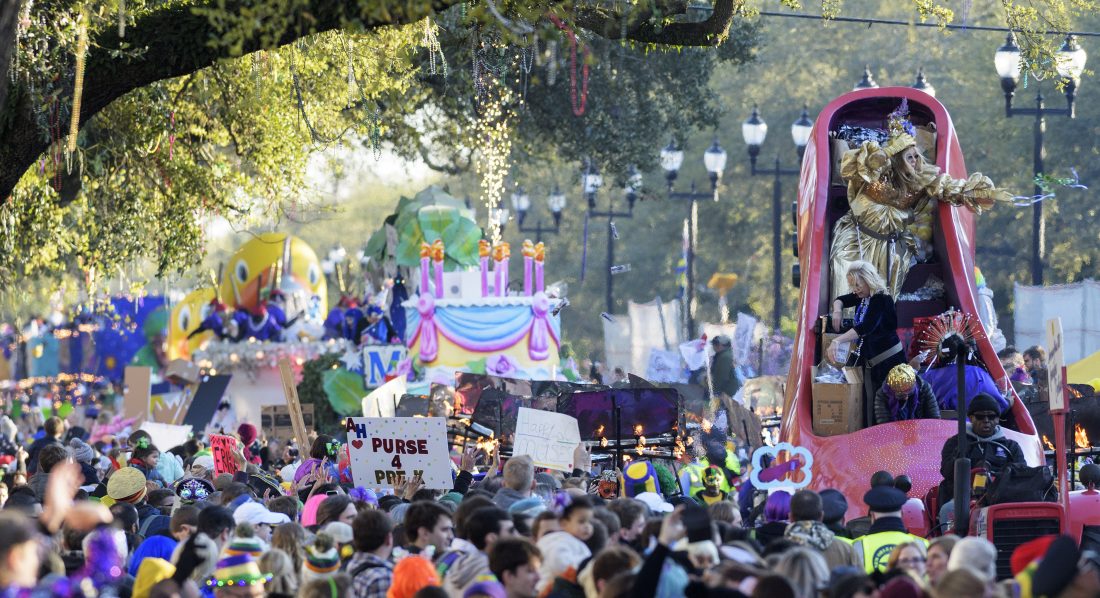 Max Becherer/The Advocate via AP Honorary Muse actress Jennifer Coolidge throws beads from The Shoe float along with over one thousand members of the Krewe of Muses as it celebrates its 20th year with 26 floats on the uptown route with the theme “2020 Visions-NostradaMuse Sees All” in New Orleans, La. Featured floats are: The shoe, the Sirens, the Bathtub, Muses Ducks and the Goddessy float.

NEW ORLEANS — Thousands of people thronged the streets of New Orleans on Fat Tuesday, reaching for beads, shimmying to the music of marching bands and celebrating the end of a Carnival season tinged by tragedy after two bystanders were killed by floats this year.

Even before sunrise, the Northside Skull and Bone Gang in skeleton costumes was out waking people up in the Treme neighborhood to celebrate a day that for some continues long into the night. And in the Central City neighborhood where the first parade by Zulu kicks off every year, many parents and children seemed to have gotten up and in position just as early.

Thousands of people lined the streets, dressed in the Mardi Gras colors of purple, green and gold, standing or sitting in lawn chairs, eating food and talking to friends and neighbors. 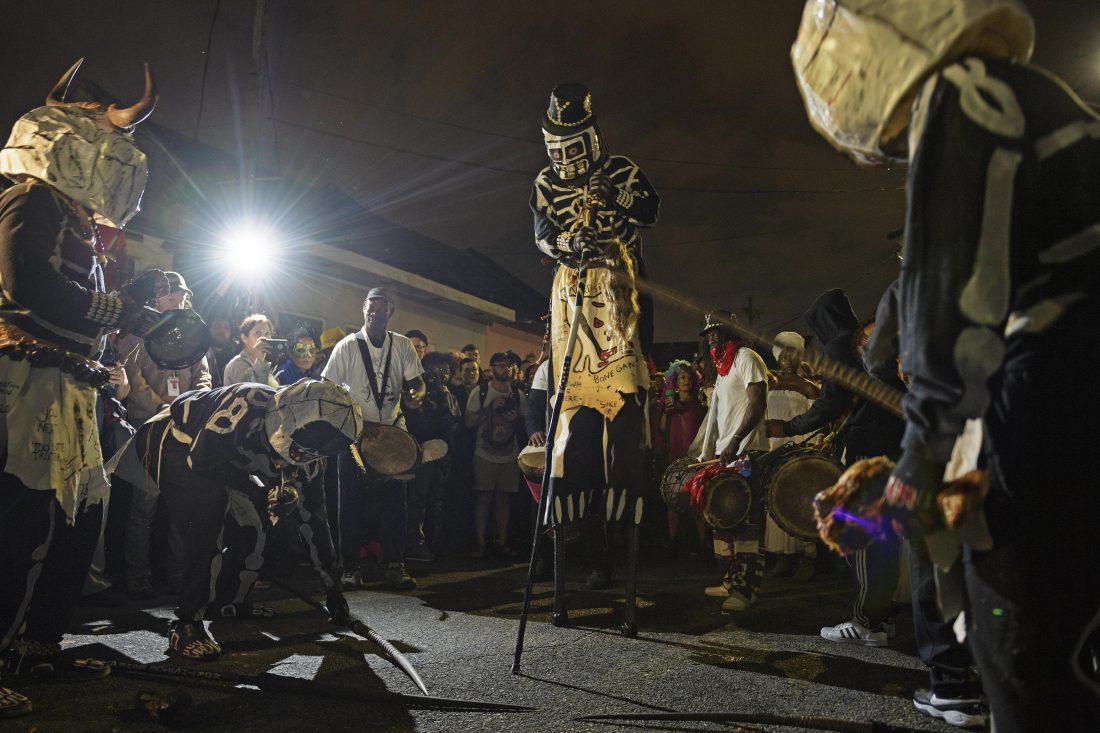 Derek Hale’s friend was riding in the parade so he was helping his friend’s wife and three children watch. Like everyone, he’d gotten up early to stake out a place.

“The most important thing is family, just being able to be out here and enjoying the music, the high school bands, the excitement that the kids have,” Hale said, holding his friend’s daughter in his arms as she watched her first Mardi Gras. “For her to take it in it’s just a really cool experience.”

Hale said the deaths of two people who were killed by floats in separate parades leading up to Fat Tuesday worried him, and he hoped there will be changes to make next year’s parades safer, such as using more barricades to keep people away from the floats. As a lifelong New Orleanian he said he knows how rare such accidents are and viewed them as isolated incidents.

“I wouldn’t be out here with these three young babies if I didn’t think it was a safe environment for everybody,” he said. 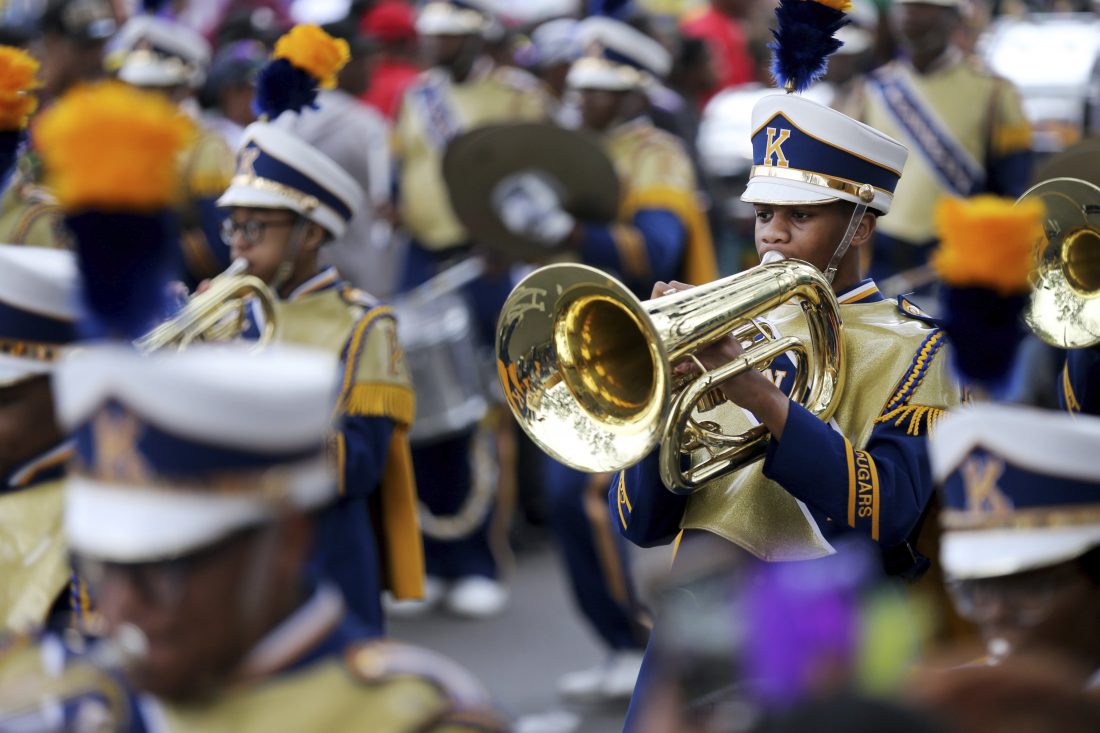 Last Wednesday, as thousands gathered to watch the all-female Krewe of Nyx parade, a woman died after being struck by a float. Witnesses told news outlets Geraldine Carmouche, 58, of New Orleans tried to cross between two parts of a tandem float and tripped over a hitch connecting the sections. Tandem floats are multiple floats pulled by one tractor.

Then on Saturday night during the Endymion parade — one of the biggest and glitziest parades every year — a man out watching on Canal Street was hit and killed by a float, also a tandem. He was identified as Joseph Sampson, 58, of New Orleans.

In front of Sadie’s Beauty Salon on Jackson Avenue, Keitra Boutan stood, keeping a close eye on her daughter. When asked if she had any concerns about safety in light of the two people who died, she said she was always worried about that. 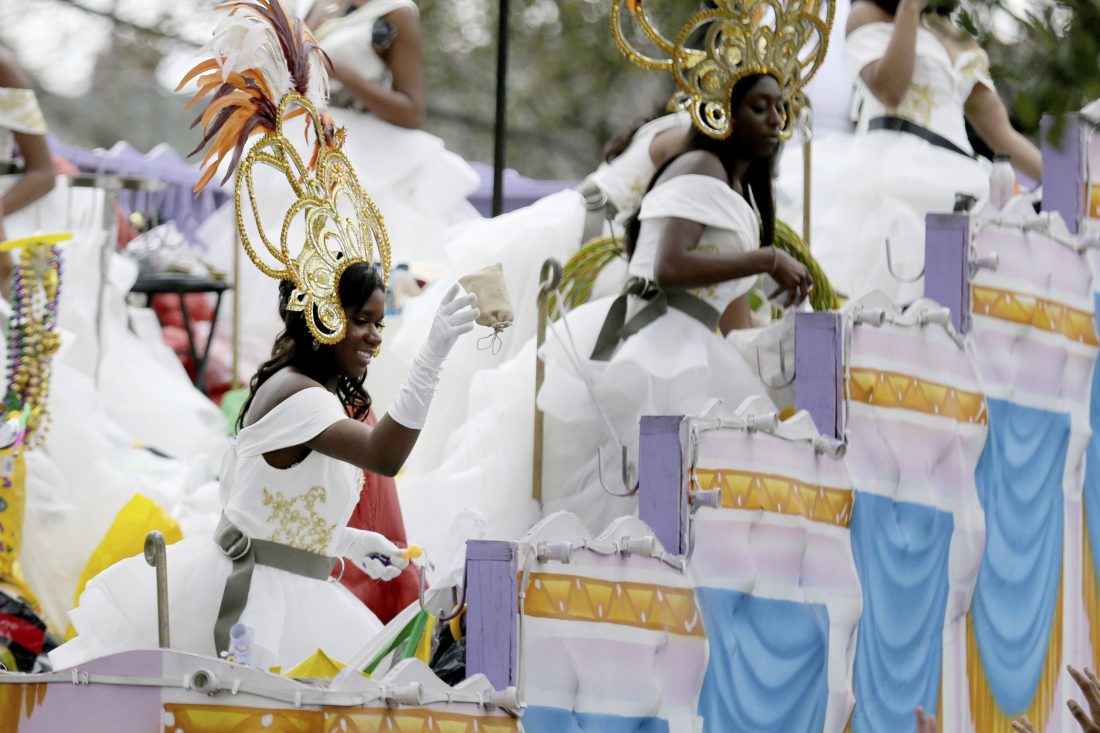 AP Photo/Rusty Costanza Maids in the Krewe of Zulu parade wear safety harnesses as they parade on Jackson Avenue on Mardi Gras Day in New Orleans.

Mardi Gras season is usually a time of frivolity and fun as thousands of people swarm into the streets of New Orleans and other cities and towns in southern Louisiana and the Gulf Coast. It’s an annual tradition of watching parades, partying and hanging out with family and friends.

Among Tuesday’s revelers was Moriah Stern, dressed as a “trash tree” in a brown top and pants adorned with leaves, beads and a flattened beer can. She and Michael Lahargoue and others were riding the ferry from New Orleans’ Algiers neighborhood to Canal Street.

“We don’t have water in New Mexico, so this is a treat,” Lahorgoue said.

Not far from them, Andrew Sullivan of New Orleans wore a shark costume to go along with the little shark bicycle helmet worn by son Finn, 2, who was strapped into a seat on his father’s bicycle.

“You ready for some parades?” he asked before riding off.

Families gather to watch the Zulu Social Aid & Pleasure Club parade on the main route down St. Charles Avenue, followed by the Rex Parade and then two more parades. In the French Quarter, people from all walks of life dress up in elaborate costumes and take to the streets to see and be seen.

Once the parades are over, the action shifts to the French Quarter’s more raucous Bourbon Street.

Every year at midnight, police ride on horseback to ceremonially “clear” the street although partying continues long past that. Then comes Ash Wednesday, which marks the beginning of Lent and a time for many Christians to fast and reflect ahead of Easter.