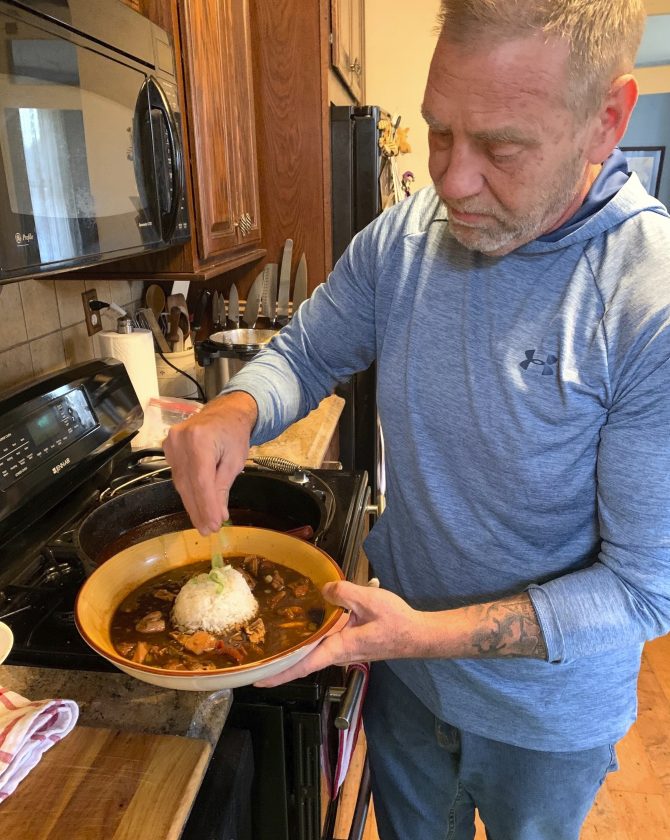 Crystal Schelle/The Frederick News-Post via AP Kevin Lipps adds some scallions to the top of his finished gumbo with rice at his home in Frederick, Md.

The Frederick News-Post, via AP

FREDERICK, Md. — It’s a recent Sunday afternoon at the Frederick home of Kevin Lipps and his wife, Lauren, and from the front room, the spicy aroma of a simmering pot of gumbo hits the nose.

Lipps, a Frederick native, ran a restaurant in New Orleans for two years where he learned to perfect the art of an authentic gumbo recipe.

With Mardi Gras set for Feb. 25, it’s time to celebrate the food of New Orleans. Gumbo might not be a Mardi Gras-only dish, but to think of the Gulf Coast one can’t help but think of the official Louisiana state cuisine. 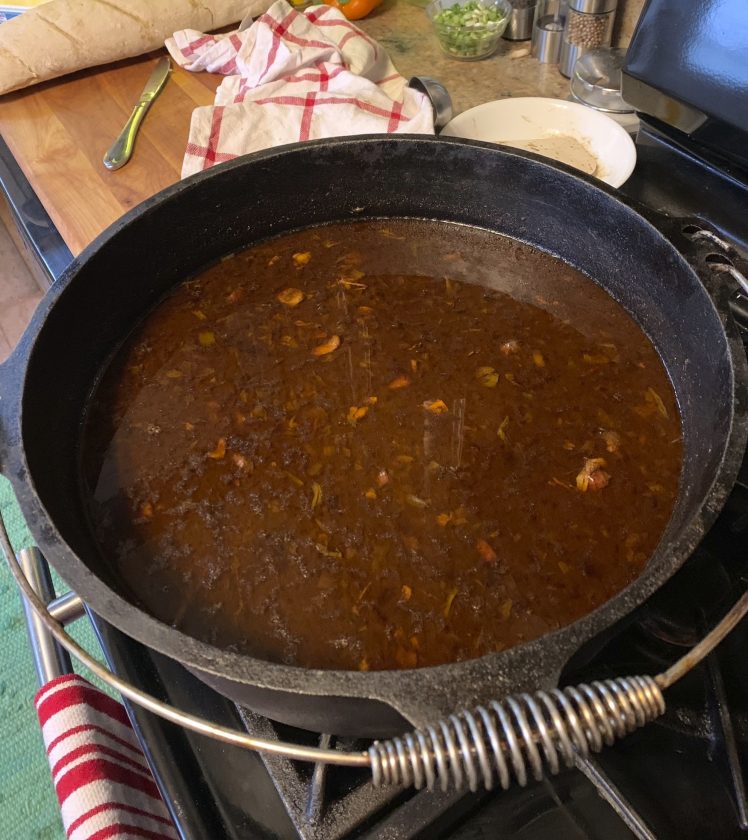 Crystal Schelle/The Frederick News-Post via AP A large pot of gumbo rests at the home of Kevin Lipps in Frederick, Md.

Although he is no longer in the restaurant field, Lipps likes to get out his large cast iron soup pot and make the dish that is requested often by his friends, his family and especially his wife.

After a business trip sent him to the Big Easy in the 1990s, Lipps said he just fell in love with the town, its people and its cuisine.

On the next visit he took his wife with him. The trip after they brought their children. New Orleans became a regular vacation spot for the family.

“Then a business opportunity arose, so I bought a bar-restaurant and moved down there,” Lipps said.

His wife, who works in the medical field, stayed in Frederick while he built up the business.

Kevin Lipps opened The Beach House, in 2010 in Metairie, Louisiana. The town is right outside of New Orleans Parrish, just 6 miles from the French Quarter.

He said he fell in love with the city even more after opening the restaurant.

“It’s more than the food. The people are just different, a different lifestyle, a different approach to life in general,” he said while sitting at his at his kitchen table as gumbo simmered on the stove. “I’m not talking about Bourbon Street, that’s for tourists. If you get out of the French Quarter and New Orleans, it’s just a whole different breed of people.”

Making gumbo is a must-have for any New Orleans menu.

“If you’re going to have a New Orleans restaurant, you better know how to make some gumbo,” Lipps said.

He said he’s eaten some gumbo outside of New Orleans, but it’s not the same.

True gumbo is time-consuming to make and can’t be left alone to simmer, he said, so larger restaurants have a difficult time justifying the labor cost of manpower to make it in the traditional way.

Lipps said figuring in labor costs can easily out-price the dish, which is meant to just be peasant food. The reason he could make the dish at his restaurant was that it was small — only 80 seats — so he said he had the staff to do gumbo justice.

Gumbo can be Creole or Cajun. Lipps said to tell the difference, Cajun gumbo is brown and green, while Creole is red from tomatoes.

To help people associate the different types of cuisine with celebrity chefs, the late Justin Wilson cooked Cajun, while Emeril Lagasse cooks Creole. Lipps’ version is Cajun, and he does not like tomatoes in his gumbo.

The base of all good gumbo is the roux, which is fat and flour. Because he had a heart attack three years ago, Lipps adjusts the recipe’s fat content. If he’s not eating it, he makes sure all of the goodness is in the pot. For the Super Bowl gumbo, which he made a week before, he made the fat-in dish.

“After I braised the chicken, I pulled it out and let the broth cool and pulled all the fat off of it,” he said. “And chicken fat is gold.”

Lipps said he braises his chicken thighs separately because he likes to stew his gumbo for a long time. He said if the chicken is left in the pot too long it will lose its flavor. It’s also why he likes to wait until last to add the chicken and sausage in the finished gumbo.

The fat from braising the thighs is skimmed to be used in the roux.

The cook-friendly aspect of gumbo is that it’s mainly a one-pot dish. Except for when Lipps braised the chicken thighs in a separate pot, the main gumbo pot stays on the stove.

Using his large cast iron pot, Lipps began with browning the Andouille sausage with some oil. After it is browned, it is set aside.

The sausage is just as an important ingredient as the others. The signature sausage for gumbo is Andouille, a pork sausage packed with spices. Lipps gets his sausage shipped to him directly from Louisiana.

Next, he made what he calls the base. Into the pot with the sausage fat, he sweats his vegetables.

Although okra is usually part of any Louisiana dish, the vegetable won’t be found in Lipps’ gumbo. He just doesn’t like okra. But those who do should also add it with the rest of the vegetables. He removed the vegetables for later, when the sock is added.

True roux. The most important aspect of any good gumbo is the all-important roux. Roux is the same for most households because it is just fat and flour, but its darkness depends on preference.

In the bottom of the pot where he browned the sausage, Lipps added flour and 2 cups of fat skimmed from the chicken thighs to make the roux. The darker the roux, the deeper the flavor, he said.

“For a sausage gumbo, you want the roux to be as dark as you can get it without burning it,” he said.

For seafood gumbo, Lipps said, the roux will be blonder.

“Because seafood’s a little more delicate than chicken and sausage,” he said.

At first, the roux comes to a peanut butter color, he said. But by stirring it constantly — every 10 minutes or so — it helps it to develop a deeper color and makes sure it doesn’t burn.

“The way I was actually taught is you cook it for about three beers,” he said with a laugh.

After the roux has reached the correct coloring, the vegetables are added back in along with the broth. The roux will thicken up the broth for a more stew-like consistency.

This is where experience helps in understanding when it’s time to take the pot off the stove.

“The darker the roux, the more flavor it has, but the less it thickens,” Lipps explained. “So you never know how much it’s gonna thicken and how much it isn’t.”

Once the smell, consistency and taste are at the level the cook wants, he adds the chicken and sausage back in and warms it through.

Lipps said it can be served with rice, or as a New Orleans tradition it can be topped with potato salad, or both. He said both help to tone down the spice.

Lipps said he loves that every pot of the dish is a new experience.

Since selling Lipps sold his business around 2012, the family has lived in Frederick. With Lauren unable to find a job in her field with comparable pay, they decided that although the business was doing well, it was time to be under one roof again.

Lipps said he doesn’t regret giving up his restaurant. He was able to experience a lot of things including being a guest chef at Commander’s Palace, which is a New Orleans’ landmark since 1893 and is known for its refined Creole cuisine.

Today, Lipps works as a correctional officer. In his post-heart dietary restrictions, Lipps doesn’t partake in the dish as often, but he still enjoys making a big pot now and again. He made some for a Super Bowl Party at the Woodsboro American Legion. In 30 minutes, the roughly 6 quarts he brought with him were gone.

Lipps said he’ll never fancy his gumbo with duck or other high-priced meats. Gumbo, he said, has always been simple food.

“This is supposed to be rustic comfort food,” he said.

And, he said, gumbo is unique to the person who makes it.

“And you make it your own because there’s really no rules,’ he said. “Other than, no tomatoes.”