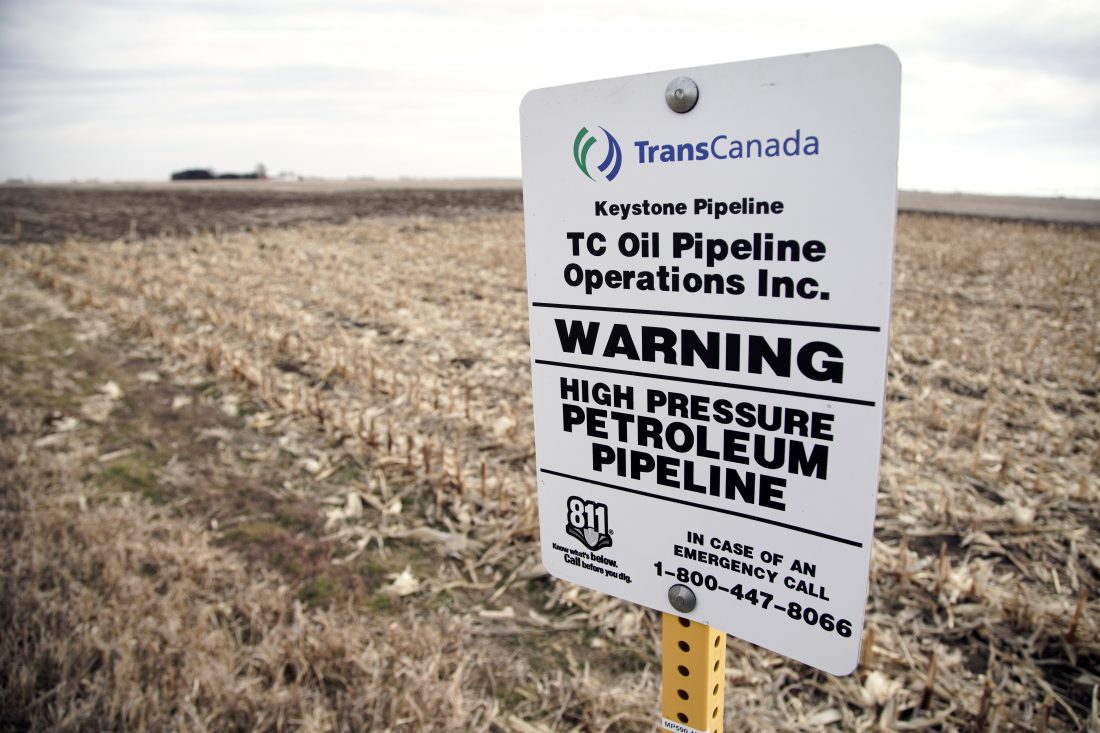 AP Photo/Nati Harnik A sign identifies the existence of a buried oil pipeline under a corn field in rural Milford, Neb.

The objections came at the last of two hearings by the White House’s Council on Environmental Quality on its proposal to cut back environmental reviews and restrict public comment on new highways, pipelines and other projects under the 1970 landmark National Environmental Policy Act, or NEPA.

The Trump administration, which has expressed frustration at environmental objections that it says are unnecessarily slowing approval for interstate oil and gas pipelines and other big projects, is proposing restricting the timelines for environmental reviews and public comment. Other changes would explicitly allow businesses a role in crafting the environmental assessments of their projects and allow federal officials to disregard a project’s role in cumulative effects, such as climate change.

Many of those speaking at the Washington hearing in an Interior Department auditorium were African American, Latino and tribal local activists from communities already dealing with pollution from oil refineries, chemical plants, government facilities and other big sources. They credited the half-century-old NEPA with giving poorer communities without much political or economic clout a platform to negotiate with government regulators and big industries. Such communities historically are disproportionately exposed to air pollution and other health hazards.

Kelley described his windows shaking from one of at least six major industrial explosions or other accidents in his part of south Texas over the past year.

“Many people are still trying to come back from those explosions,” Kelley told those at the hearing. “When you’re talking about weakening NEPA and expediting a process, this is what happens. Don’t lessen the regulation. Don’t silence our voices.”

An African American woman from Garysburg, North Carolina, said the public input enshrined in the targeted environmental rollback was what gave her community tools to deal with current and proposed projects for the area, including a pipeline, factories and industrial-scale hog farms.

“You act like you’re listening, and I’m not going to say you’re not. But we see the results of these hearings,” the woman, Belinda Joyner, told the listening panel of Council on Environmental Quality staffers and officials.

“I ask you to do what’s right for the people. Listen to us as well as people who got all this money, and feel like they can do what they want,” Joyner said.

The proposed rollback is among the broadest and most consequential of scores of environmental and public health reversals and changes that the Trump administration is seeking.

President Donald Trump has sought to scale back regulations that he sees as needlessly costing businesses money or slowing their work, especially with regard to the oil and gas industry. The American Petroleum Institute and other oil industry organizations were among those pushing the Trump administration for action on changes to NEPA.

Business representatives at Tuesday’s hearing complained about yearslong environmental reviews under the current rules. The Trump administration proposal would limit those environmental studies to an average of no more than two years and restrict public comment periods to months.

Mary Neumayr, chairwoman of the White House environmental panel, called the rollback a modernization that “will not only help our economy, but also our environment.”