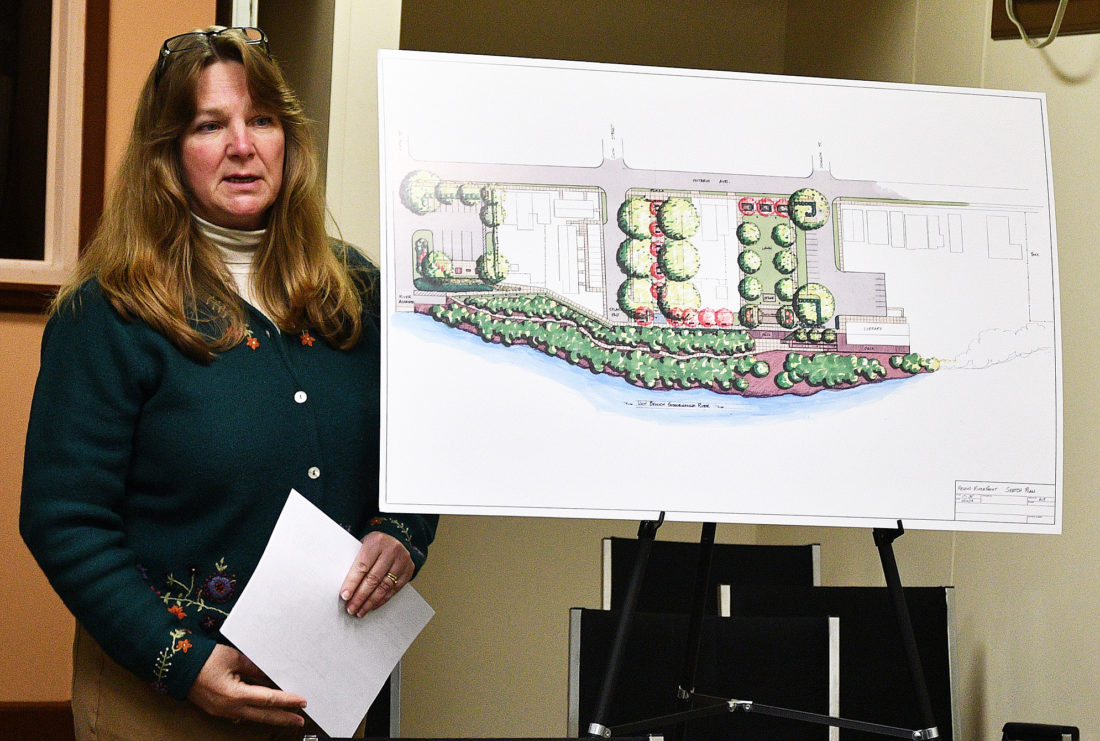 KEVIN RAUCH/THE EXPRESS Susquehanna Greenway Coordinator Alice Trowbridge unveiled one of the first drawings of the proposed Riverfront Project that is hoped to create a new relationship with Renovo and the Susquehanna River at last week’s borough council meeting.

RENOVO — With the December Renovo council meeting coming just five days following a large drug bust in which a Renovo woman was charged with possessing an estimated $8,000 in cocaine along with other drugs and paraphernalia, the Renovo Police Department received applause numerous times over the course of the December council meeting.

A member of the public joined Renovo Mayor Tom Tarantella Jr. and other council members in thanking the borough police department for the arrest. Mayor Tarantella said that K-9 Officer Jordan assisted in the bust, joining Sgt. Mike Jeffries and Officer Ryan Bratton.

Officer Bratton had handed in a letter of resignation to Tarantella prior to the arrest and looks to take a position at the Clinton County Sheriff’s Department, but the mayor tabled the resignation as of last Wednesday. It’s hoped that the two sides can come to an agreement of part-time work for the young officer as he starts his new position with the county.

Spearheaded with a $10,000 Peer Grant the Susquehanna Greenway Rivertown project in Renovo has been making strides in becoming a reality as Greenway Coordinator Alice Trowbridge updated council and unveiled a drawing of the first proposal of what the town could look like as it re-connects back to the Susquehanna River.

Trowbridge explained that the project has reached the point that it will now be looking to the public for ideas and suggestions, likely through newspaper and social media. The group would like to have some feedback as it plans an open house in February to begin to look into the feasibility of making the public’s visions a reality.

In addition to walking trails that center on the riverbanks of the Susquehanna, early plans include spacious areas for activities such as farmer’s markets, artisans craft fairs or even a pavilion for public use.

The Renovo Area Public Library could end up being a cornerstone of the efforts based on its location. An observation deck for example is being looked into where readers could sit and read while looking out over the river.

Trowbridge asked council to look over and approve a questionnaire that will soon be circulating throughout the community.

Maureen Ruhl and Donna Kshir were on hand to introduce themselves and their group. Advocates United for Humanity. Kshir started the child advocacy group five years ago with a goal to provide vital resources for children and animals exposed to abuse. Ruhl explained that it has since garnered national attention but remains mostly unknown locally.

Ruhl said there are many children who go through daily struggles whose neighbors don’t even realize the reality, let alone the school system or law enforcement. Kshir said that she has helped hundreds of kids in harm’s way, many in the area.

The duo did not come empty handed. They gave council, on behalf of the police department, 200 kits that among other things are fingerprint cards to get children registered nationally. Ruhl and Kshir also presented 50 teddy bears for police to use as they see fit with the suggestion of helping to calm a worried child.