A gift and opportunity to the community 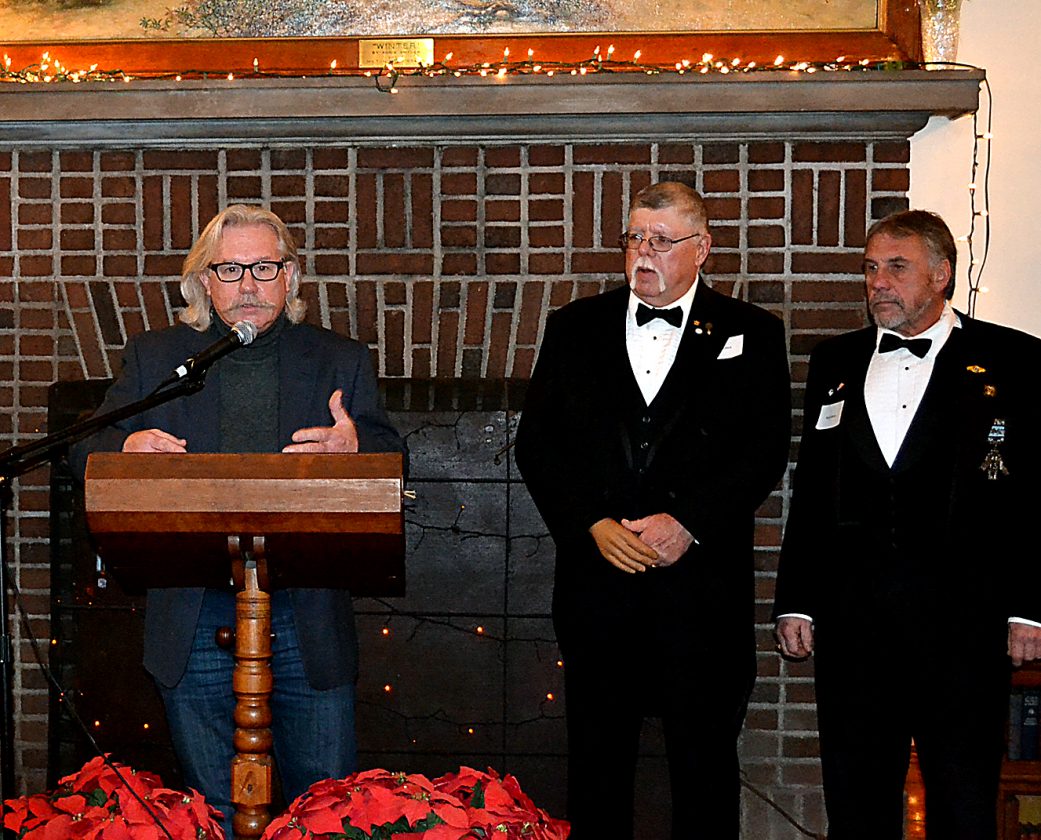 LOCK HAVEN — Members of the historic Masonic Temple in downtown Lock Haven want to give the community a gift.

In what they and others involved are calling a “once-in-a-generation opportunity,” Lodge 199, Free & Accepted Masons, is negotiating with the nonprofit Downtown Lock Haven Inc. and the Clinton County Arts Council to convey the iconic building to DLH, with the goal of turning it into a cultural, business and community center that would host community-driven programming and events and act as an economic stimulus.

The announcement was made last night by Steve Getz of the Arts Council in front of some 150 people during Downtown Lock Haven’s Time Out at the Masonic Temple.

Among those participating in the announcement were Mike Slack and Mac Myers of Lodge 199, members of the downtown board and staff. 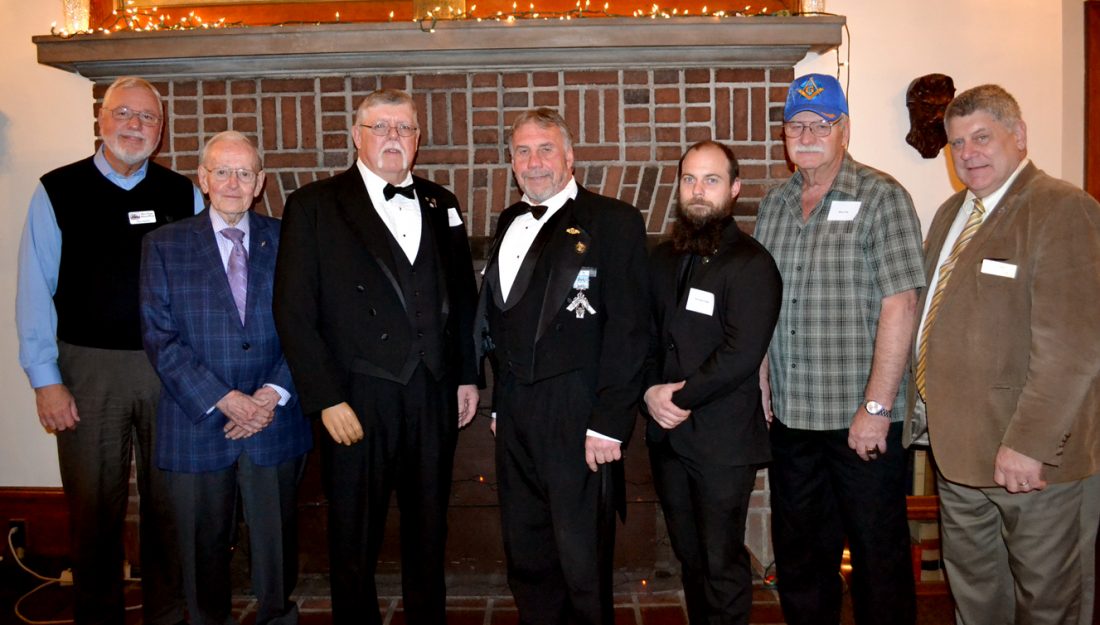 The parties issued the following statement:

“Lafayette Lodge 199, Free & Accepted Masons, Downtown Lock Haven Inc. (DLH) and the Clinton County Arts Council (CCAC) announce they are working on an agreement whereby Lodge 199 would convey the historic Masonic Temple at 150 East Main St. in downtown Lock Haven to DLH or an affiliated entity, contingent upon the iconic building being turned into a cultural, business and community center for public use.

“The parties are finalizing a sales option agreement that gives DLH and CCAC the opportunity to conduct a feasibility study of the building, generate a market study and business plan, and gain private donations and grant funding to ultimately take over operation of the building. The term of the option is five years, with a review of the progress of the endeavor by Lodge 199 by the end of three years of the date of the agreement.

“Members of Lodge 199 approved the agreement last week; it now goes before the downtown board.

“Exercising the option to buy the building is contingent upon further approvals by both parties, plus the Grand Master of the Grand Lodge of Pennsylvania. The Masons would retain use of the building under an agreement with DLH or an affiliated entity.

“With guidance from Abigail Roberts, planner for the City of Lock Haven, DLH has begun development of a grant application to the Pennsylvania Historical and Museum Commission (PHMC) for a feasibility study to determine cost estimates to convert the building to public use by making it handicap-accessible, for any preservation work that is needed and for renovations.

“One of the ultimate goals of Downtown Lock Haven and the Arts Council is to create opportunities to bring more residents, students – and importantly, visitors – into Lock Haven to shop, dine, tour, attend events and to simply get to know the area.

“We believe the Cultural Center can be a catalyst to achieve this objective, to create an economic stimulus on Main Street and throughout the entire city, and to be a place for community programming.

“On behalf of the community, Downtown Lock Haven and the Arts Council want to express sincere appreciation to Lodge 199 members for their dedication and devotion to Lock Haven and Clinton County.”

In announcing the initiative, Getz said last night’s announcement was among the first steps in pursuing grant funding and starting a Capital Campaign.

“Three years ago, the Arts Council, the Masons and Downtown Lock Haven began discussions about how to re-purpose this building to become a multi-use facility. This was needed due to the declining membership and increasing cost to maintain the building,” Getz said, citing several priorities”

— Preserving the building as a historic landmark on Main Street.

— Continued use by the masons.

He said some possible uses of the building include a technology incubator, office spaces, winter theater productions, an artist in residence program, music and recording studios, video library and a performing arts hall.

“We want to assure (everyone) that our plans will not cannibalize or threaten existing businesses, art galleries, institutions, performance theaters or clubs. To the contrary. Our hope and goals are that this facility will be a collaborative asset that works to make our area a more attractive place to live, work, play and visit,” Getz said.

The downtown group and Arts Council are aware of the challenge, he said, but added, “By acting now we can ensure this structure will be part of Main Street now and in the future. By re-purposing the building, we can attract visitors and tourists downtown thus creating an economic stimulus for the city and county.”

The two entities, Getz noted, are very aware of the community support this ambitious project requires.

“We are laying the groundwork … but this will not happen without total community support. I cannot emphasis this more. We are looking at a once in a generation opportunity,” he said.

The two organizations will help to spearhead a capital campaign to raise money to match most grant dollars.

“It will be a challenging journey but I would like to thank the downtown executive committee, the full board and the entire membership of the Masonic Lodge. Lodge members have been true stewards of this building for nearly a century and deserve credit for sharing a common vision for the future,” Getz said.

Slack and Myers hope this endeavor ensures the continued use of the building for years to come.

Myers said the organization has been a part of the community for 175 years as of this year.

“That’s quite a milestone,” he said.

“We want the building forever here in Lock Haven,” Slack added, noting that this not only creates a strong partnership between DLH and the Masons but also ensures the building will be restored and well taken care of.

Walking into the Masonic Temple at 150 E. Main St. Is like walking back in time.

Nearly all of the original woodwork remains.

So do the unique stairwells, the Masons’ elaborately decorated ceremony room on the 2nd floor, as well as the small auditorium on the third floor.

The building is among the most historic in the city. It was constructed in the early 1920s, but the origin of Lodge 199 in Lock Haven dates back to the early 1800s.

The large, neo-classical revival brick structure is in the heart of downtown.

A Pennsylvania Historic Resource Survey of the state Bureau of Historic Preservation describes the building this way:

“It is a very symmetrical building of monumental proportion and is distinguishable by its brick and cut stone construction. Features of importance include the iconic columns and pilasters, the draped window mold on the top floor and above the entrance, the keystoned windows, the single light sash composition of all windows — the first floor side windows are recessed within semi-circular, arched openings., the boxed cornice, dentils and plain frieze. It is elevated several steps above the street level and is a very masterful example of architecture, remaining unaltered from its original construction.

“This dominant and very representative, neo-classical revival building was designed by Philadelphia architects, Stearns & Woodnutt. The contractors were Boydhouse-Aray, also from Philadelphia.

“It is a very significant building, contributing much to the varied architecture of the city. Of the eight neo-classical revival buildings in Lock Haven, it is one of the five most significant prime examples of the style. The grand scale of this building and its lavish entry are dominant features on Lock Haven’s Main Street.”