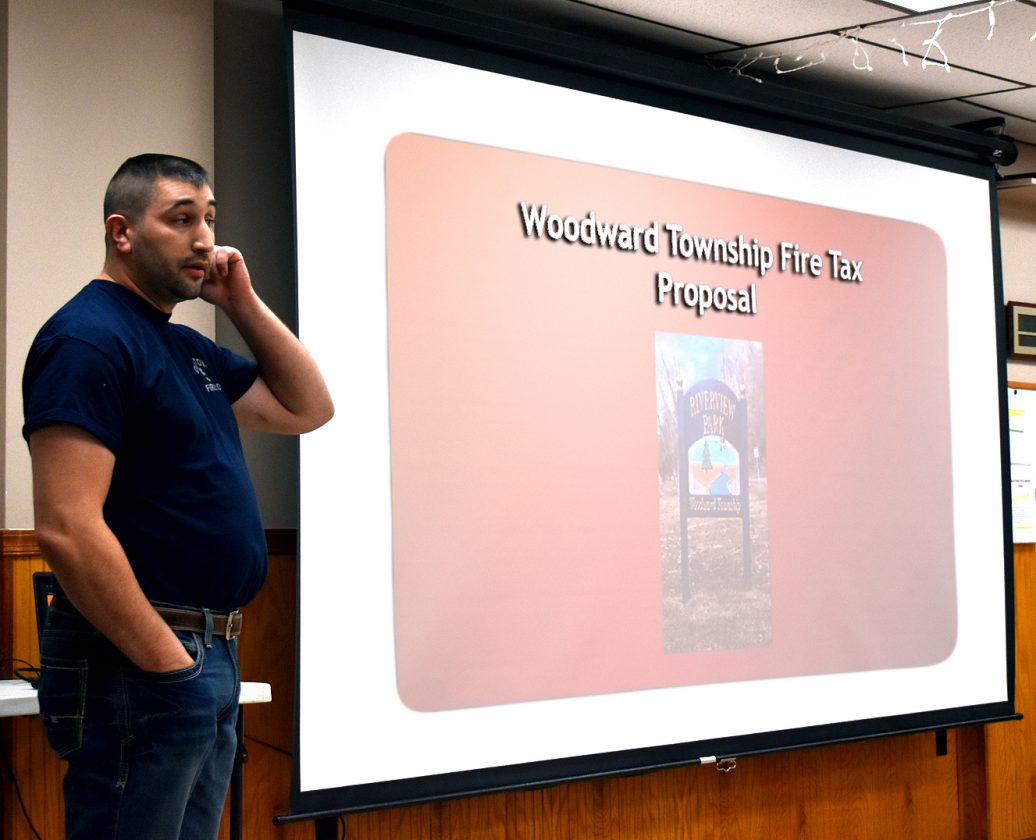 DUNNSTOWN — Woodward Township supervisors will consider adopting a fire tax at their regular meeting at 7 p.m. Tuesday at the Dunnstown Fire Hall.

The fire tax has been a topic of debate among residents during and after two recent public meetings hosted by the supervisors.

The supervisors are considering a 1-mill fire tax on assessed property value.

At that rate, it’s estimated the new tax would bring $135,000 to the township, with supervisors then allotting — as they see fit — funds per request from the fire company.

Fire Chief Justin Baker outlined costs to the public at the meetings, and estimated the “bare minimum” cost of a new truck is $600,000, plus nearly $60,000 to properly equip it.

Baker also said the cost to properly outft an individual firefighter is about $16,019.

The township donates $15,000 per year to the fire company and pays for its workers’ compensation insurance amid also allocating money from its Act 13 fund, said township secretary Jackie Bartlett.

If supervisors approve the fire tax, the township would be one of few in the county to have one.

Of municipalities near Woodward, only one has implemented a fire tax.

Pine Creek Township enacted a fire property tax of 0.195 mill over a decade ago, according to township secretary Darlene Macklem.

“Pine Creek is a big municipality and we actually support both Woolrich and Avis fire companies,” Macklem said.

The tax is based on the assessed value of a property and is listed separately from a real estate tax, she said.

“It’s separated, it’s not added to the millage rate for your real estate,” she said.

According to the Clinton County Assessment Office, to determine the amount a property owner would pay each year, one would multiply the tax by the assessed value.

Municipalities such as Flemington, Renovo and Mill Hall boroughs and Castanea, Lamar, Wayne and Chapman townships do not have a fire tax.

These municipalities utilize the Local Service Tax as well as allocate funds to their local fire companies within their budgets.

According to the Pennsylvania Department of Community and Economic Developments municipal statistics, every municipality in the county, Woodward Township included, has an LST tax.

People employed in Woodward pay a $10 LST per year which is split between the township and the Keystone Central School District, the website, munstats.pa.gov, reads.

An LST, formerly Emergency and Municipal Service Tax, can be used by municipalities to help fund local emergency service crews including fire, police and EMS, according to the Commonwealth of Pennsylvania’s website, PA.gov.

This tax is based on employment within a borough or township with a cap at $52 per person annually, the website said.

Crawford Township is the only muncipality in the county out of 24 to not utilize the tax.

Fourteen other municipalities in the county tax employees $10 annually. Twelve tax the maximum $52 and few tax at $30 or $40 — Pine Creek Township taxes the latter which is split between both KCSD and JSSD.

“We have the $52 local services tax, everybody in Western Clinton County pitches in for the ambulance in Renovo,” Chapman Township Secretary Elizabeth Whitty said.

“We donate and we pay their workers comp insurance,” she said.

The Mill Hall Fire Co. typically will request donations throughout the year but the borough usually donates a certain sum from its budget, she said.

“They always request donations but the borough actually donates an allotted amount during the year,” she said, adding that the 2020 budget has allocated $5,500 to the company.

“We require the fire company to submit a request during our budget time and then (council) decides if they want to fund the whole project or a part of the project,” she said.

Walizer-Etters added that the company didn’t request any funds in 2020.

“We budget to donate and we provide fuel for their vehicles,” she said.