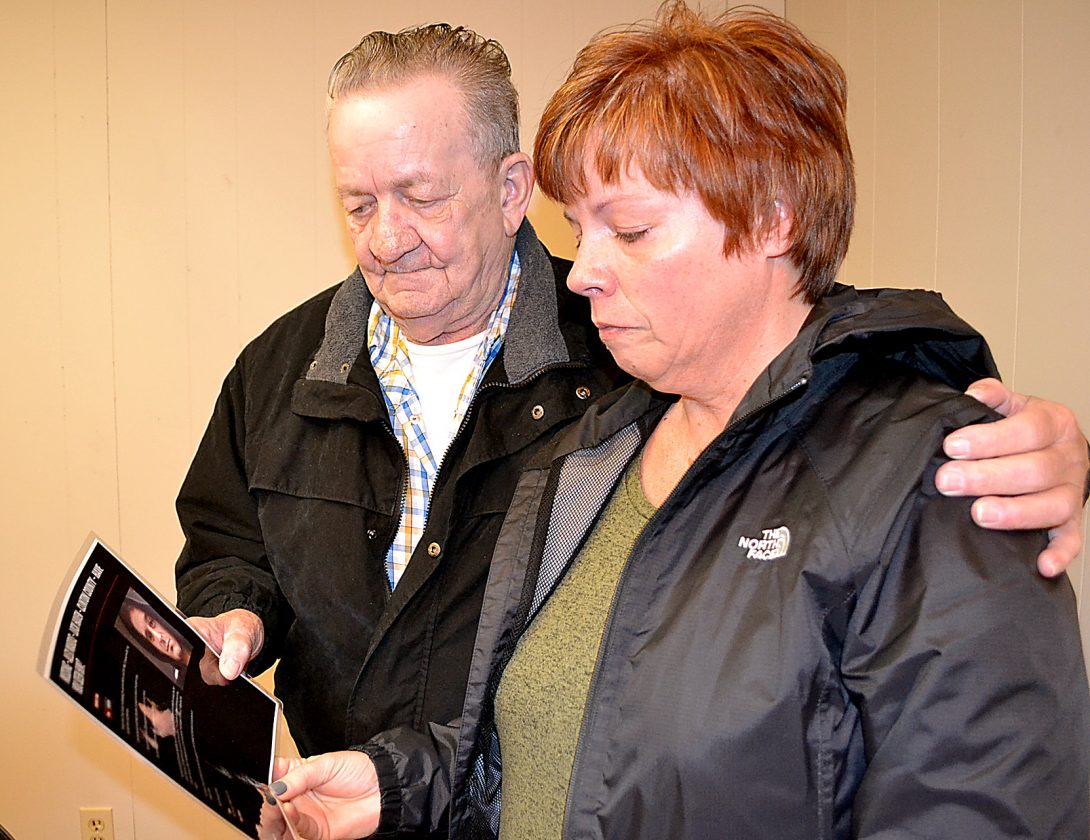 PHOTOS PROVIDED Bruce Gray and his daughter Tammy Mackey look longingly at a photo of their grandson and nephew, Alex Mardis, on a poster like the hundreds they’ve displayed throughout the area asking for help in finding Alex, who has been missing since Oct. 30, 2019.

LOCK HAVEN — They don’t sleep. They don’t eat. They cry a lot and have horrible thoughts about what may have happened to the handsome 31-year-old man they love dearly.

It’s been more than 100 days since the mysterious disappearance of Alex Mardis.

They’ve called all of Alex’s friends and relatives. They’ve formed search parties and scanned the area where he was allegedly last seen. They’ve made and put up hundreds of posters on poles and in mini marts, bars, and other places that people frequent in hopes somebody might recognize Alex.

But, nothing… nothing has given them a clue as to where Alex might be… even if he’s dead or alive.

It’s a family’s worst nightmare, but they’re not giving up.

Alex’s grandfather Bruce Gray of Blanchard, and aunt, Tammy Mackey, of Beech Creek, stopped by The Express one day last week to share this heartbreaking story and implore anyone who knows anything about Alex’s disappearance to come forward.

It was Oct. 30, 2019 the day Alex, who had been living with his grandfather in Blanchard, left the house with his girlfriend.

After a day or two, Gray said he called the girlfriend and asked if Alex was with her.

“She told me he took his fishing rod and left the house and she hadn’t seen him in a day or two,” Gray said.

“I couldn’t imagine he had gone fishing. He liked to fish, but the river was really high and it was raining hard… so hard they even canceled the Halloween parade,” the grandfather continued.

Ironically, a water rescue was issued that very same day after somebody called the Clinton County Communications Center and reported seeing a man in the middle of the Susquehanna River waving his arms and yelling for help.

State police from Lamar, local fire companies with boats and divers and even search dogs went to the scene near the Wayne Township boat dock.

On shore they found a Muck boot and an insole from a second boot, but no rod or tackle box. Family members and emergency workers searched the river and shore area for days, looking for clues. Nothing turned up.

The boot and insole were sent to a state police lab, along with a comb containing Alex’s hair to compare the DNA, Tammy said.

“We haven’t heard anything about those results,” Tammy said, tears in her eyes as she realized how long it’s been and still no answers.

Trooper Kim Patterson of the Lamar barracks said this week that the investigation is still active.

“We’re following leads and talking to people… it’s an ongoing investigation,” she said, declining to comment further on the case that has left this family living in fear of the unknown.

Alex’s grandfather said he knew right away that something was wrong.

“It wasn’t like him to be off the grid. That’s when we called police and reported him missing,” Gray said, noting that Alex sometimes stayed at his girlfriend’s house, but always called or came back every day or two. “I pretty much always knew where he was. This just isn’t like him.”

Tammy, fondly called Aunt Chip or AC by Alex, agreed it was unusual for her nephew not to call or stop by her home. Tammy said Alex’s mother, Tanya Gray, lives in Largo, Fla., and “she’s been kept abreast of Alex’s disappearance and is very grateful for everything we’re doing,” Tammy said. Alex’s father, Craig Mardis, lives in Flemington.

Tammy said they’ve heard all the rumors about Alex and his not so savory lifestyle, but they know him as a loving and kind young man who reached out and helped people in need.

“No matter what he was or wasn’t… or did or didn’t do, Alex was somebody. He was our somebody. We love him and want him back. Somebody knows where he’s at and what happened. We just want him back. It only takes one person,” Tammy said, asking that person to search their heart and let the police know what happened to Alex.

Although the family tries to stay optimistic, they say it gets harder every day.

“There are so many people out there missing and no one ever finds them. Where are they? Somebody knows,” Tammy continued.

“If he was still alive he would have gotten ahold of his mother. He would have found a way. Alex, if you see this, call us and let us know you are okay. Get home,” his grandfather said, sadness in his voice as he looked at the photo of his grandson and shook his head in disbelief.

“Somebody knows. Please help us,” Tammy said, wiping tears from her face as she and her father walked away arm-in-arm.

Any persons with information regarding this missing person who knows of his whereabouts are asked to contact the PSP Lamar Station at 570-368-5743 or call the Pennsylvania Crime Stoppers at 1-800-4PA-TIPS (8477). All calls remain anonymous and could be eligible for a cash reward.