‘We’ve been here before’ 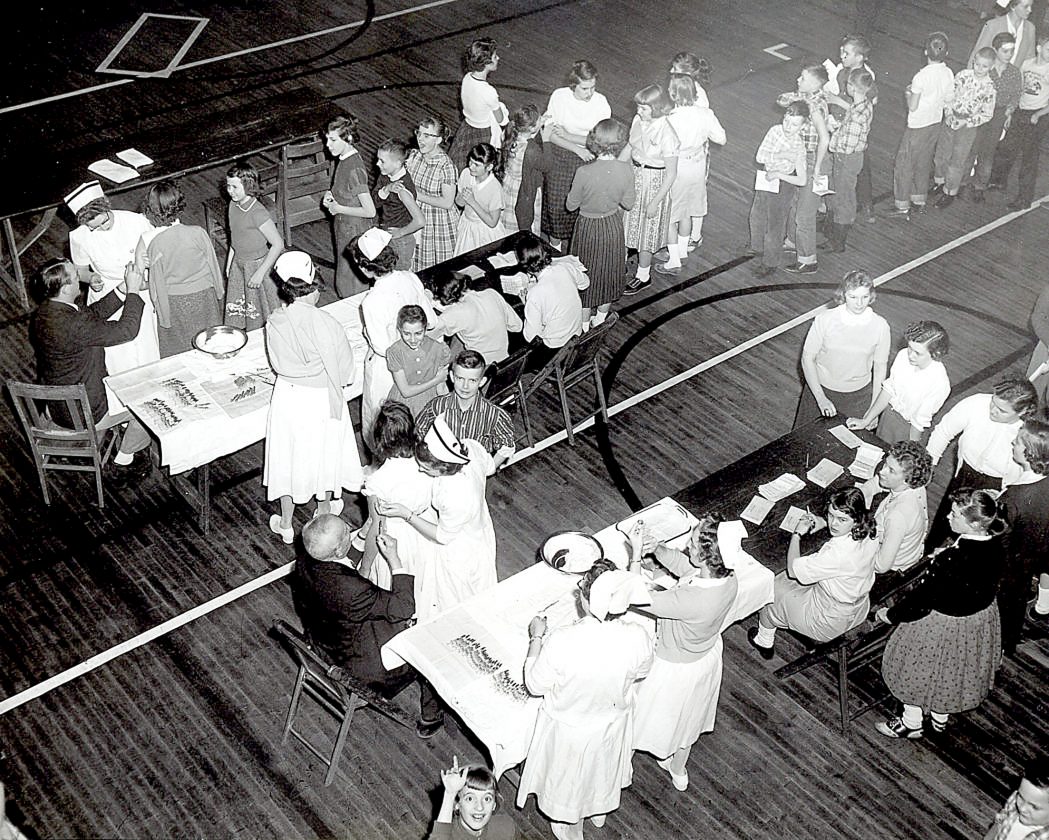 EXPRESS ARCHIVES The Lock Haven High School gymnasium turned into a clinic back in the 1950s when eastern Clinton County Polio Pioneers of 1954 reported for their final immunizing shot of Salk vaccine. When the boys and girls pictured were second graders — in the try-out year of 1954 as Salk vaccine was first being made available — these pioneers volunteered to take the first shots. Since then the standardizing of mass of material in a shot, and a perfecting of a time schedule to provide full immunity has been verified and complete.

We’ve been here before.

With the spread of Covid-19, it’s easy to panic. In the midst of shutdowns, quarantines, and hospital shortages, it’s very easy to be afraid. And with people saying things like “unprecedented,” it’s easy to lose sight of the fact that it’s really not.

We’ve been through epidemics and quarantines before, all of us in Clinton County. Cholera, typhoid, and diphtheria in the 1800s. Scarlet Fever in the early 1900s. The Spanish Flu in 1918. Polio in the 1950s. And once in 1928, we got hit with Scarlet Fever, Chicken Pox, Whooping Cough, and mumps all at once. And we got through it together, as a community.

(As you read this, go easy on me. I’m working from home right now, which means that I don’t have access to the archives at the Ross Library or the courthouse, both of which are closed. So I’m working from memory and the documents I have on hand at home. Also, the schools are closed, which means I have a little boy distracting me every five minutes.)

Of course you should be scared and cautious. I’m scared and cautious. But there’s a difference between being reasonably scared and panicking. We’re all going to have to take precautions: Wash your hands. Keep to yourself as much as possible. Stay home. Avoid anyone who might be immunocompromised. All of that is a good idea. It’s okay to be afraid….But stay calm, as well.

The polio epidemic is one that hits especially close to home for me, because my father had it. Growing up, I used to hear about how it happened when he was seven years old.

My father, Lou Bernard Sr. of Slatington, lived on a farm in Montgomery County. One summer while helping his aunt carry buckets of water across a field, he and his family noticed that he was able to make less and less progress–stopping for rests more frequently, able to travel less distance as he walked.

“They took me to the doctor, and I was diagnosed with polio. He sent me immediately to the hospital,” my father said.

This would have been 1948, when he was seven years old.

“I had a toy with me when I went in,” he remembered once. “A small toy truck or something like that. When I was leaving the hospital, they wouldn’t let me take it with me, because they thought it might spread polio again. I was so happy to be getting out, though, I didn’t care.”

That was one of the frightening things about to polio epidemic — We didn’t understand it. People weren’t sure what caused it, or how it spread, which caused a lot of misinformation to be repeated. Back then, we didn’t have the internet, which today allows us to spread misinformation much faster.

Polio began to creep into society in the mid-1940s. Much like today, it was caused by a virus, though nobody knew that at the beginning. In Lock Haven, the earliest cases I could find were on East Park Street, which seems to have been Ground Zero for local polio victims.

This led to a quarantine in September of 1944 … and not the last. 1944 and 1947 were especially heavy years for the epidemic in the city.

“Forty-one families who have been in contact with the city’s first infantile paralysis case have been placed in quarantine for 14 days,” the Clinton County Times reported on Sept. 14, 1944. By October, cases began to be reported in Loganton. Charles Bennett, aged 17, was listed as the fourth victim, though his case was considered “not serious.”

During most of this, the mayor of Lock Haven was Charles Herr, serving his second and third terms from 1948 to 1955. Herr was an especially popular mayor, and very concerned about the epidemic, declaring several periods of quarantine. He took it very seriously, having been through something like it before. He’d lost his son to diphtheria almost 50 years previously, and his daughter Kathryn had been quarantined with Scarlet Fever as a child.

In 1952, nationwide, people began to get the incorrect idea that polio was spread by insects. This led to a plan to spray areas with DDT to kill the insects, which was its own health risk, but that discovery would come later. In August, the county commissioners mapped out the high-risk areas that would be sprayed.

In September, the Lock Haven Kiwanis stepped up. Forming an “Anti-Polio Committee,” they began by donating a spraying machine, suggesting it be used for what they called the “Polio Cavalcade.” They donated a load of DDT a week later. As they began spraying, the quarantine was lifted by the mayor on Sept. 17. The head of the committee inspected the city dump during the process. At the time, the Wayne Township Landfill hadn’t been created yet, and Lock Haven had its own dump much closer to home.

There was a ray of light in 1954, when clinical trials were announced using Jonas Salk’s polio vaccine. The vaccine was first used in Lock Haven in late April of 1954, when 306 second graders were vaccinated as a test.

“I remember when the vaccine came out,” reminisced my father. “My parents insisted I get vaccinated. I argued that I’d already had polio, and was therefore immune, and didn’t need the shot. Later, when they came out with the oral version on a sugar cube, they made me take that one, too.”

By early May, with the vaccine successful, the number of recipients had grown and so had the age group, with 3,000 children in first through fourth grades being inoculated all over the county. Days later, over 600 children were given the second shot in the series.

Within the next year, polio numbers had dropped, and gamma globulin was invented to help prevent the spread. In September of 1955, the Lock Haven Hospital was given $10,000 worth of gamma globulin. The hospital, which was on Susquehanna Avenue at the time, put out the word that one Woolrich child and one Lock Haven woman had been diagnosed with polio, and they were giving out the shots to anyone who’d been in contact with them.

Today, polio has basically been eradicated. And I just spoke to my father on the phone this morning. He’s fine. Check on your loved ones by phone or online while this is going on. Avoid spreading it any further. Stay home, stay safe.

It’s always a dark time while it’s still happening. I can write calmly about polio right now, now that it’s far back in the past. We’ll get through this. And one day, this will be history, too. 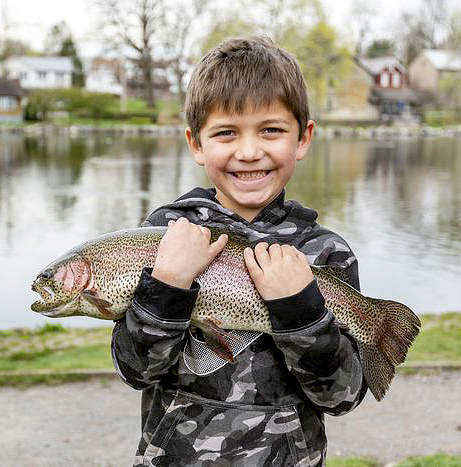 BELLEFONTE — Sporting protective masks, the Centre County Board of Commissioners met on Tuesday and discussed ... 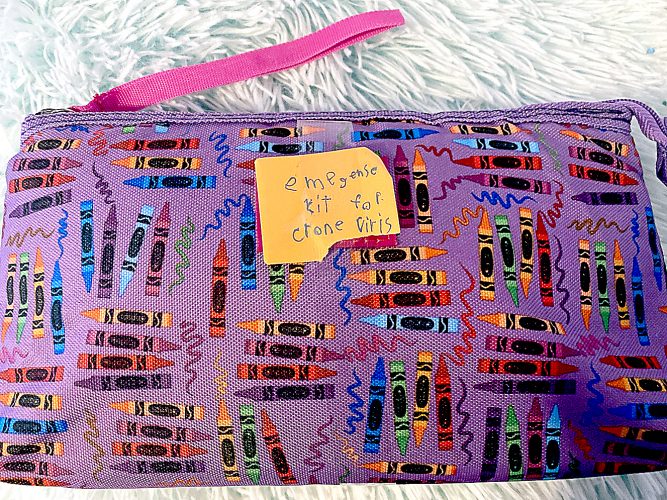 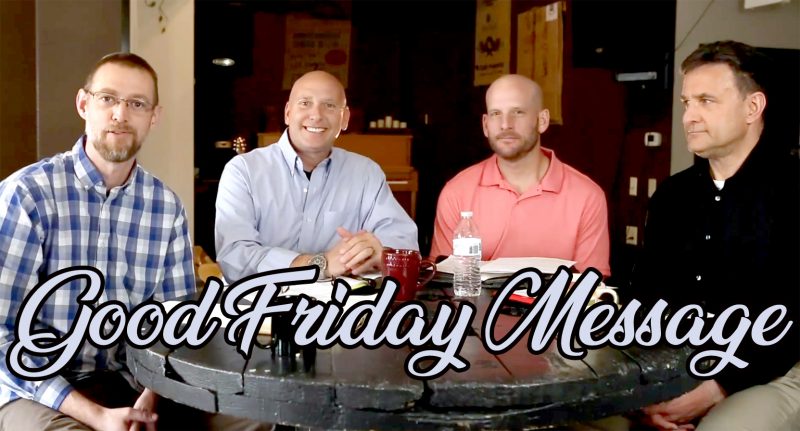 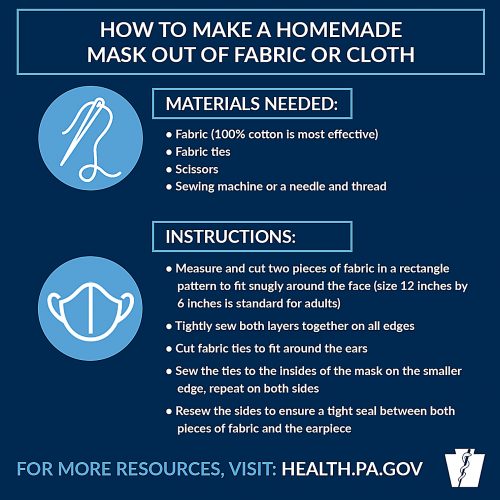