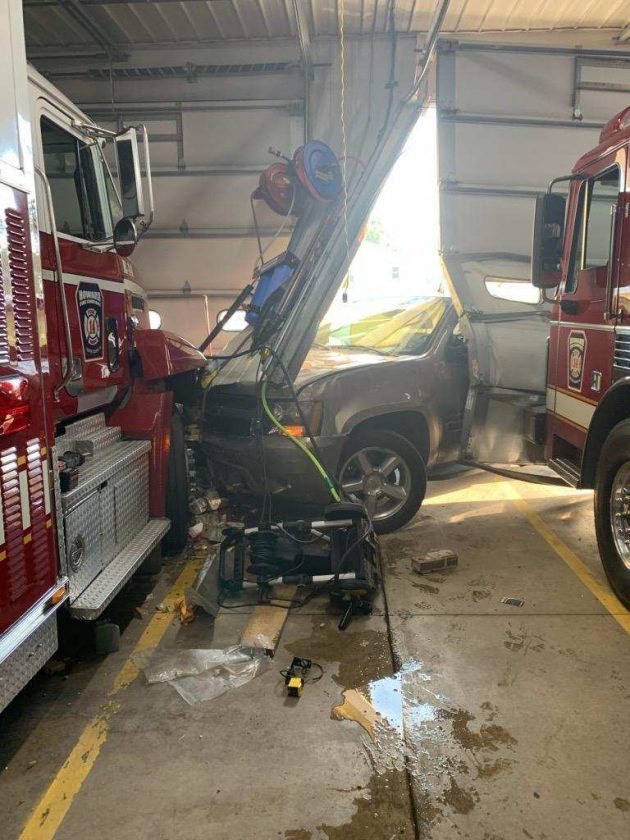 PHOTO PROVIDED The 2007 Chevy Tahoe that crashed into the Howard VFC building on June 29.

HOWARD — A crash was investigated by State Police at Rockview on June 29.

Police say that a 2007 Chevy Tahoe being driven by Kline Wolf, 74, of Howard was traveling east in the Howard Volunteer Fire Company parking lot when he had a medical episode and struck the Howard VFC building. The Tahoe entered the building and struck a couple of fire trucks.

Wolf was transported to the Mount Nittany Medical Center by the Howard VFC.

Yearick was issued a citation and summons for the crime.

LOCK HAVEN — A case of harassment was investigated by Lock Haven City Police around 10 p.m. on June 29.

According to police, Kealey McCracken, 18, of Lock Haven struck a person in the face. She was issued a citation for harassment.

BEECH CREEK — A one-vehicle crash was investigated by State Police at Rockview on June 21.

Police say that a 2002 Jeep Liberty being driven by Laurel Hanley, 37, of Orviston was traveling west along Monument Orviston Road in Howard Township, Centre County. Hanley encountered a curve in the roadway and failed to negotiate it. Her Liberty struck an embankment before coming to rest.

The accident took place at 2:01 p.m. Police say that Hanley was hurt in the crash, but refused EMS.

BELLEFONTE — A case of drug possession was investigated by State Police at Rockview around 11:45 p.m. on June 22.

Police say that they responded to a domestic incident that took place in the parking lot of CVS in Bellefonte Borough, Centre County. Upon further investigation, it was found that 29-year-old Kylie Berg of Boalsburg was in possession of a small amount of marijuana and related paraphernalia. Charges were filed through magisterial district justice 49-3-02.

BELLEFONTE — State Police at Rockview investigated a case of harassment that took place at 4:36 a.m. on July 1 at 113 N. Allegheny St. in Bellefonte.

According to police, they responded to a private residence for a possible harassment incident. Police say that Richard Packer, 47, of Bellefonte, was harassing a 33-year-old Bellefonte woman. Charges were filed through magisterial district justice 49-3-02 for one count of 2709, entitled harassment.

LOCK HAVEN — The following schedule is provided by the Clinton County Court of Common Pleas and is subject to ...