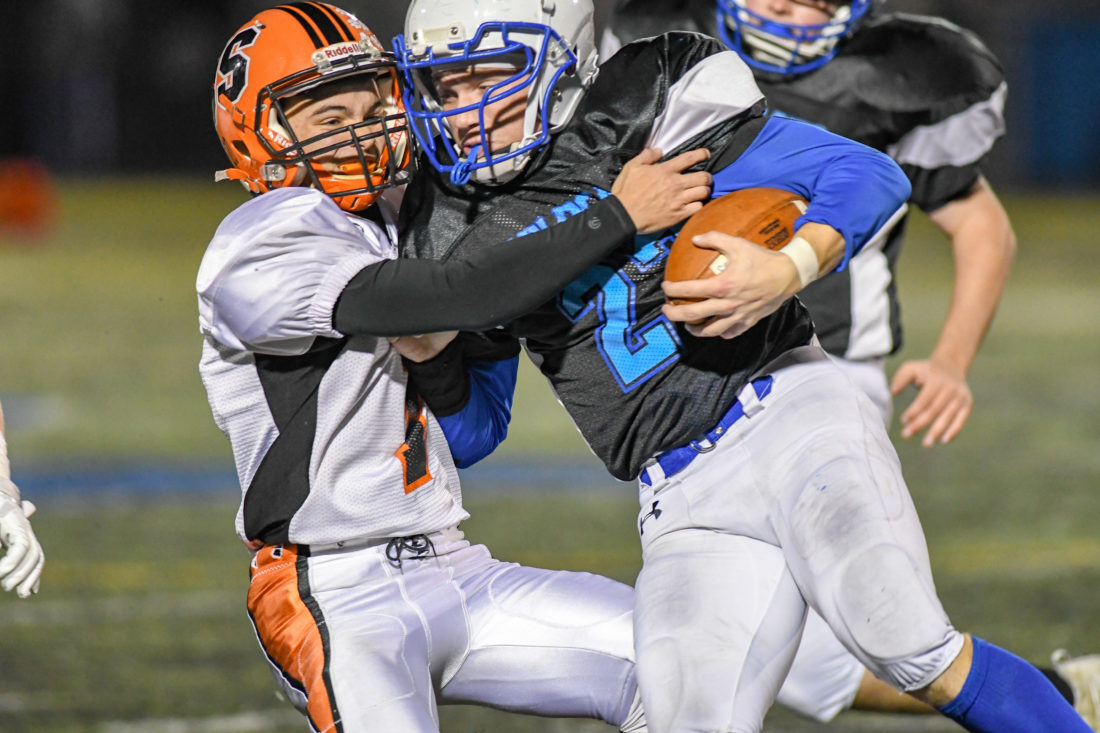 Central Mountain’s Rocco Stark (23) runs the football while Jersey Shore’s Cam Allison (7) makes a tackle. The Wildcats fell to the Bulldogs in the game, 40-14.

A perfect season and a championship…a solid season…some nice individual performances and a whole lot of frustration. These were the realities of the 2018 fall sports season for the Central Mountain teams.

The golf team, under the direction of John Lodek, went a perfect 25 and 0 on the season. Lodek’s golfers were solid from the top to the bottom of the lineup as they cruised to another Pennsylvania Heartland Conference Championship. The future looks bright as well for the Wildcats as five of their top six golfers from this year’s team return next season, including Brady Williams who led the team in many matches, as well as District VI qualifier Jason Floruss.

Coach Pete Wert’s Lady Wildcat tennis team had another solid campaign. The team relied on a number of young players who grew up fast, which enabled the Lady Cats to find success. Overall, the team was 12-3 on the season. That included a 10-2 record in the PHAC. Over the course of the last three seasons, Coach Wert’s program has piled up a combined record of 45-10. The Lady Cats were led by Junior No.1 Kendall McCluskey, but also got a number of fine contributions throughout the lineup from some other young players. Coach Wert said this of his team, “We had a lot of great players to replace this season with some young players, and they exceeded expectations. The girls have spent a lot of time out-of-season preparing, and it definitely showed in the way that they played. We will have many players returning for next season and the team will be very experienced so expectations are even higher.” Surely, one thing that the Lady Cats will be looking for is a way to beat Williamsport, the one league team that they couldn’t defeat this season.

The girl’s volleyball team had an up and down season with a mostly young-and-inexperienced group. Playing under first year head coach Scott Garmen, the team finished 5-13 overall. Aside from a 4-match win streak in late September, the Lady Cats were unable to get over the hump in most of their matches. Many of their defeats were by 3-0 scores, but those scores are not completely indicative of the teams competitiveness in those losses. Garmen’s team loses senior leader Jenni Skow, but will return a number of talented underclassmen including Loni Duck, Evie Rembold, Mackenzie Hanna and Abby Brinker among others. So, the future of this program seemingly is bright.

The cross country teams got some solid individual performances throughout the season. As teams, the boys finished at 8-12 while the girls ended up at 1-17. A portion of those losses for the girls was essentially by forfeit as they only had six girls on the roster, and with a couple of injuries they didn’t have enough runners to score as a team. Corbin Green led the boy’s team while Christina Lugg and freshman Gianna Dressler led the girls. The lack of numbers is something that hopefully the junior high club team can help to rectify as those runners reach the senior high. If not, there could be trouble on the horizon for a program that has produced a number of very successful collegiate runners. Dressler is a talent. Will there be others to go with her? Time will tell.

On the pitch, the Lady Wildcat soccer team endured a long campaign as they finished with just one win while suffering seventeen losses. A lack of scoring was a glaring problem as coach Cole Black’s team was able to find the back of the net just six times all season. The Lady Cats were shutout 13 times on the season while also surrendering 96 goals on the defensive side of things. This team was generally young with just four seniors. However, there will be a lot of work that those youngsters who return will need to do in order to change the fortunes of this once proud and highly-successful program. The participation numbers are good but quantity doesn’t always mean quality. Improvement in many areas is needed. Are they up to the challenge? Again, time will tell.

On the boy’s side, first year head coach, Billy Hook saw his team finish 3-14-1. Like the girls, the boys also struggled to score with just thirteen goals on the season. Unlike the girls, they were a bit stronger on the defensive side with just 57 goals surrendered. Coach Hook instituted a bit different style of play than what was used the past few seasons by the Wildcats. He said this about his team and the season, on the positive side, “the team was able to change to a faster style of play.” Also “a few freshmen and sophomores stepped up to show what they could do.” He also said that on the negative side, “our main priority of the season was to score more goals, but we weren’t able to do that. We couldn’t find a guy who could put that final touch in the net on a regular basis.” As for moving forward, the first-year coach said, “The area should be excited and hopeful for the soccer program. We had a few senior leaders help show the way for a very young team. If the young guys in the program keep that going, there can be some promising years coming.”

The football team ended another tough campaign at 1- 9 overall. The lone victory was a Week 9 win over Mifflinburg. There was some solid play from a few talented kids but overall the Cats were seemingly overmatched in too many contests this season, as the mercy rule became more of a norm than an exception. There has been much talk about what ails the program and what can be done to fix it but I will not weigh in on that matter here or elsewhere for that matter. The struggles have been well documented and don’t need rehashed here. The Cats will lose senior standout wide receiver, Collin Jones but will return quarterback Zane Probst and tailback Rocco Stark to the backfield next season. What I will say is that an area I believe that the Cats must work to improve upon for next season is the quickness, agility and strength of its linemen. A bit of nastiness from the underclassmen who will return would be helpful as well as the Wildcats were more often than not be dominated at the line of scrimmage this season. It all starts up front and improvement there will be critical if Probst, Stark and a few other athletes who will return will be able to have the production that they are capable of in 2019.

Now it’s time to dole out some awards.

Team of the season: The Wildcat golf team. Hey, they finished a perfect 25-0. Tough to beat that. Well done golfers!

Athlete of the season: Always tricky to pick these. I’m a team-first guy, and in order for me to recognize someone for this they better have stood out. On the girl’s side, I’m going with Kendall McCluskey who led a young Lady Wildcat tennis team to a solid season. Also considered were volleyballers Jenni Skow and Loni Duck. On the boy’s side, I simply looked at the name of the award and went with what I believed was the best athlete out there this fall, Collin Jones. Playing in just his first season of high school football, Jones was a talent who put up solid numbers for the Wildcats. Don’t be surprised when you hear his name again…like a lot. His sport is basketball and in two weeks he will be on the court. Also considered here were Corbin Green from the cross country team and a few of those golfers. Sadly, well maybe not, they were hard to separate, as there were a number of them with solid seasons.

Coach of the season: Of course this one is purely for fun as the CM coaches are my coaching colleagues and I respect what they do. However, because this is to bring deserved recognition to one of them, I select… golf coach John Lodek. What Pete Wert continues to do with the tennis teams each year is impressive as well.

Looking Ahead: This is the last review that I will write as I grab my whistle and step back onto the court for the first time as Lady Wildcat Basketball Coach. While I won’t be writing about the games and teams this winter, I will be hoping that the CM teams will find great success this winter and thus provide others with plenty of good things to say and write about them.

Thanks for reading. Talk to you again in the spring. Go Wildcats!