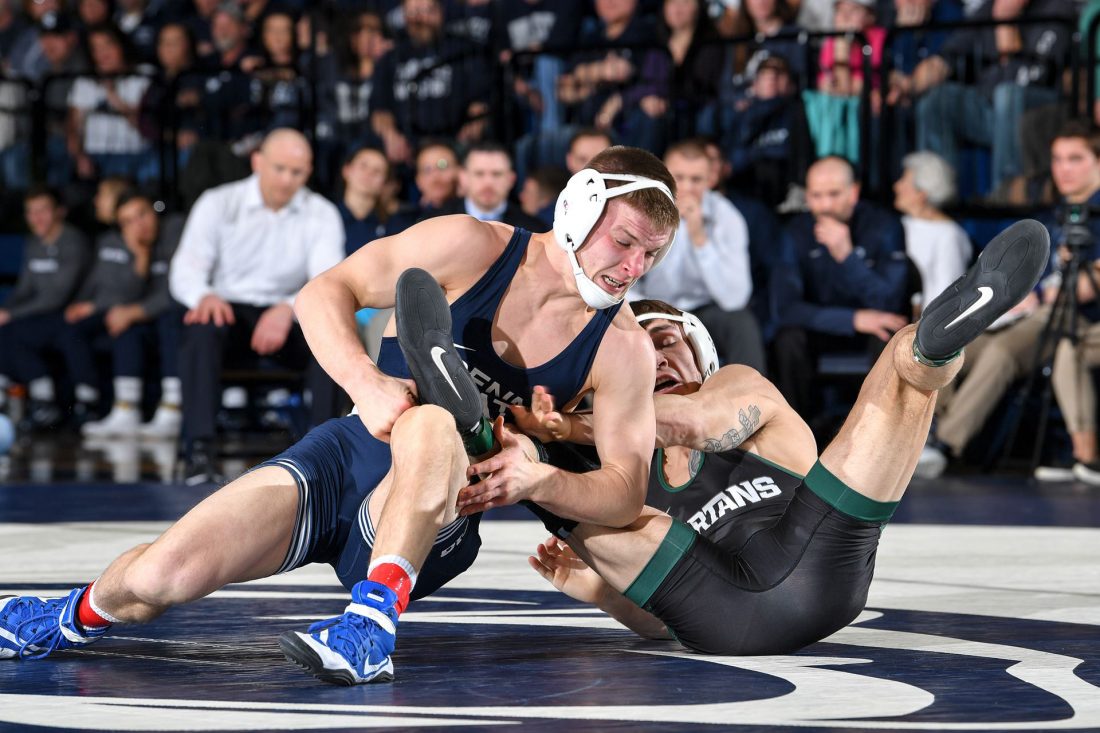 When the first whistle blows to start wrestling at 11 a.m. Saturday in the University of Minnesota’s Williams Arena, three teams figure to be the favorites to win the 2019 Big Ten Wrestling Championships team title.

To Penn State coach Cael Sanderson’s way of thinking, there may be a few more contenders.

“In a tournament like this, it’s Ohio State and Iowa and Michigan and Nebraska. We’re at Minnesota, so they’ve got some great wrestlers. Not to count anyone out, but those are some of the higher ranked teams.”

How deep is the talent pool at this weekend’s tournament? Well, nine of the nation’s 10 top-ranked wrestlers and six of 10 ranked No. 2 will be in attendance. And, of the 140 wrestlers who will be competing, more than half (74), are ranked among the top 20 at their respective weights.

While there are only 14 teams, the talent is so concentrated that performances out of the norm can affect the team race, both positively and negatively.

“Tournament time is always fun. Unfortunately, Big Tens have not really gone my way or our team’s way the past two years,” Joseph said. “That’s fine; it’s not like it’s NCAAs.”

It is, however, a close second.

Here’s a weight-by-weight look at the tournament, with the number of automatic qualifiers to the NCAA championships in parentheses.

The two clear favorites here — Northwestern’s Sebastian Rivera and Iowa defending NCAA champion Spencer Lee — would seem to be headed for a rematch. Rivera took Lee down three times in the Midlands final on his way to a 7-3 win.

Final we’d like to see: Rivera vs. Lee (Can Rivera win again, or will revenge be a dish best served by Lee during the finals?)

In arguably the deepest weight in the conference and the country, Michigan two-time All-American Stevan Micic sits at the top. The semifinals here should be dynamite.

Final we’d like to see: Bravo-Young vs. DeSanto (As quick and athletic as these two are, 7 minutes might not be enough to settle it.)

Three wrestlers — Mike Carr of Illinois, Nick Lee of Penn State and Joey McKenna of Ohio State — have distanced themselves from the rest of the weight. Lee owns a win over McKenna, but that’s the only meeting among these three. McKenna, Carr and Lee finished 1-2-3 last year. They could finish in any combination this year. If the pre-seeds hold, Lee’s path to a title would be through McKenna and then Carr.

Final we’d like to see: Lee vs. Carr (Has Lee closed the gap since last year?)

Rutgers’ Anthony Ashnault is the clear No. 1. He owns a 14-10 December win over Ohio State’s Micah Jordan. There’s no evidence that a similar outcome wouldn’t happen again in the Big Ten finals.

Final we’d like to see: Ashnault vs. Jordan (The two best should meet to settle things.)

Penn State’s Jason Nolf decisioned Nebraska’s Tyler Berger, 10-4, on Jan. 20. After that win, Nolf said he intentionally wrestled conservatively to prevent Berger’s leg attacks. He said he wouldn’t do that again. Berger, shortly after that, announced he was signing off social media but not before he said he would be “taking five heads home with me after the NCAA tournament and yes, that includes Jason Nolf’s.”

Final we’d like to see: Nolf vs. Berger (Be careful what you wish for, Tyler.)

Five wrestlers are legitimate contenders here: Penn State’s Vincenzo Joseph, Iowa’s Alex Marinelli, Wisconsin’s Evan Wick, Nebraska’s Isaiah White and Michigan’s Logan Massa. The semifinals will be must-see viewing. Joseph has never won a Big Ten title, and if does this year he will have earned it.

Final we’d like to see: Joseph vs. Marinelli (These two have been heading for a showdown.)

Penn State’s Mark Hall and Michigan’s Myles Amine are clearly the headliners here. Hall is 3-0 all-time vs. Amine, but each of those was a one-point win. So, a finals showdown figures to result in a close Hall win, unless Amine can find a way to get over the hump.

Final we’d like to see: Hall vs. Amine (Amine usually finds a way to keep it close.)

Ohio State’s Myles Martin has the most impressive resume and is the favorite at this weight. There may be another six wrestlers, Penn State’s Shakur Rasheed among them, who could challenge. If Rasheed isn’t slowed by the brace on his right knee, a final against Martin would potentially be entertaining.

Final we’d like to see: Rasheed vs. Martin (Two superior athletes with a wide array of moves from rival teams.)

Penn State’s Bo Nickal has rarely been challenged this year and is the clear favorite. It will be interesting to see if Ohio State’s Kollin Moore has shaken off the shocking first-period fall against Nickal in the dual meet and could actually give the Lion a match. A semifinal of Moore vs. Iowa’s Jacob Warner could be entertaining.

Final we’d like to see: Nickal vs. Warner (The present vs. the future at this weight.)

At a weight that features nine wrestlers ranked among the Top 14 in the country, two have separated themselves from the pack — Minnesota freshman Gable Steveson and Penn State senior Anthony Cassar. They are both undefeated in conference, but Steveson made his college debut by beating second-ranked Derek White of Oklahoma State, 8-2, while Cassar fell to the Cowboy, 3-2. A showdown between these two has been anticipated for a while.

Final we’d like to see: Cassar vs. Steveson (Who doesn’t want to see what happens when the nation’s two most athletic heavyweights tangle?)