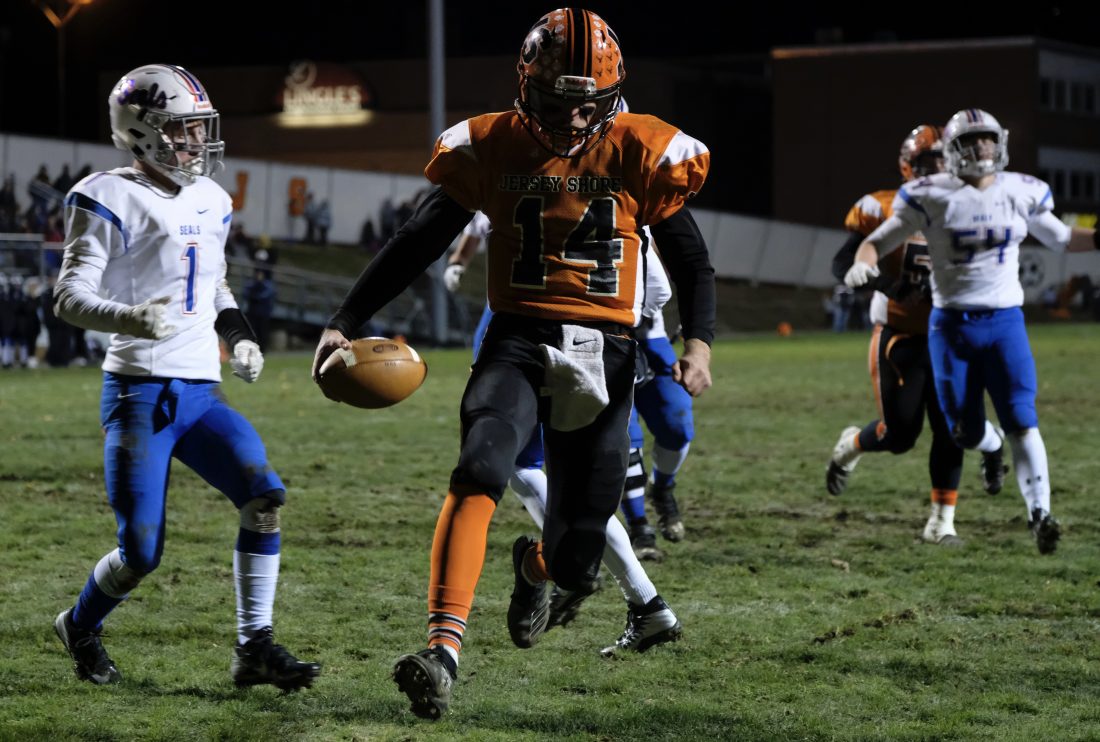 DAVE KENNEDY/Sun-Gazette Correspondent Tanner Lorson shore runs for a touchdown in the first quarter against Selinsgrove.

JERSEY SHORE- The Jersey Shore Bulldogs took home another district crown with a 33-14 win over Selinsgrove. Head coach Tom Gravish has molded a district title into not only a goal, but a regular occurrence for the Bulldog program. With their second in as many years, and fourth in the past seven, the Bulldog motto “Tradition Never Graduates” has certainly been coming to fruition.

Unlike the past four weeks in which the Bulldogs have obliterated the competition, the Selinsgrove football team made the district title game exactly what it should be, a battle.

After taking a 36-point lead into halftime just a week ago, Shore took a one possession lead into the locker room and had to grind to secure another district crown.

Senior Quarterback Tanner Lorson did it all Friday night, from his three interceptions, to his four touchdowns, to his game changing fake punt conversion that ultimately seemed to flip the momentum for good in the orange and black’s favor.

“It means everything, we’ve been looking forward to this game all year and we’ve been working for it. We’ve never beat them twice in the same year, so back-to-back is really a huge step for us. Getting a game like this, our last two games we’ve been hitting on all cylinders, this is just making us more confident for the state game, and we’d like to get our first state playoff win”

Lorson threw for 268 yards and added another 142 on the ground.

“It was a goal for us, a lot of people, close friends, town’s people, different people, said ‘hey, you lost so many guys last year it’s gonna be hard to be .500.’ It’s the toughest schedule in the history of our school district and I thought our guys answered the bell. Hats off to our guys, they’ve been really working their tails off and they wanted it. They felt like we could do anything,” Head coach Tom Gravish said of his team’s mindset and victory.

Coming off consecutive weeks in which running back Josh Malicky eclipsed 200 yards, the stifling Selinsgrove defensive line was cued in on him from the get go, and in turn, Lorson picked the team up as a senior captain is expected to do.

“When you hit playoff-football, if you can get some turnovers and flip the field with special teams it’s usually a recipe for success. We had four turnovers, special teams scored, but Lorson was just that good tonight,” Selinsgrove head coach Derek Hicks said following the game.

Selinsgrove kept this game close through three and a half quarters but ultimately the Jersey Shore defense stifling any offensive consistency was the difference. State Champion wrestler Nate Schon was a force to be reckoned with notching 3.5 sacks in the first half alone for the Seals defense.

Defensively for Jersey Shore it was a most impressive performance in a big time game. Ryan Kerschner’s name echoed throughout Thompson Street Stadium play after play. Josh Malicky was incredible in special teams coverage wrapping up and taking a returner down at first contact over and over again, and Brett Guthrie was a force to be reckoned with in coverage closing gaps and locking down the Selinsgrove offense to just 48 yards in the air.

“They had some good field position on us early, and they couldn’t quite take advantage of it because of our defense. We thought the defense would put pressure on them by getting some three and outs which they did. We made some great special teams plays with our special teams coverage. It might not look pretty but we’ll take it. They have some deep return guys that run touchdowns on everybody else” Gravish spoke of his defense and special teams performance.

With the impressive back-to-back district titles, comes a whole different beast in state playoff football. Penalties were an issue yet again for the Bulldogs as they lost the penalty battle for the third straight game. Offensively the Bulldogs turned the ball over four times, something that could come back to hurt even an extremely talented team like Jersey Shore at the state level.

“First thing I gotta do personally is limit the turnovers and that was the major problem today with our offense. Our defense basically shut them out tonight besides a few broken plays. We need to clean up a little bit and we’ll be set for the state playoffs,” Lorson said following the game reflecting on his performance.

“But it means everything, I’ve been dreaming of this since I was a kid and getting two of them just means the world, it makes me happy for our team and our program looking forward,” he continued.

“We’re gonna practice and address it on Monday. A lot of it is we wanna run fast, and no huddle. Guys are still fidgeting in their stance and not quite getting set, we’re gonna iron that out because we want to win next week. We felt the penalties we had kept Selinsgrove in the game,” Gravish said reflecting on areas of improvement and the penalty issues after the win.

The Bulldogs will face Bishop Shanahan at a site to be determined next week in the first round of the PIAA Class 4A state playoffs at a neutral site.

Tradition never graduates, nor did Senior leaders Tanner Lorson, Josh Malicky, Ryan Kershner, and Brett Guthrie who return to the state level hungry to finish what they weren’t able to just a season ago.