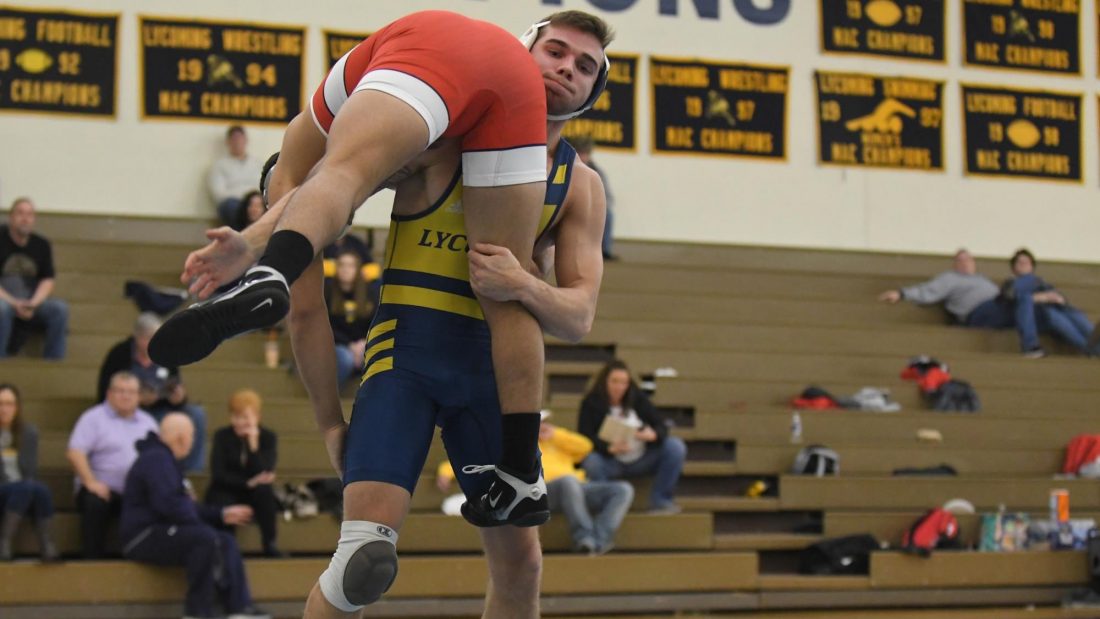 Hadyn Swartwood’s success at Lycoming has never been about his talent. He knows that. His coach, Roger Crebs, knows that. And neither one is afraid to bring it up.

Swartwood, a Jersey Shore graduate and senior 174-pounder for the Warriors, has, at times, been his own worst enemy on the wrestling mat. From a talent perspective, Swartwood has long been capable of being one of the top wrestlers in the country in his weight class. But he’s admittedly struggled with the mental side of the sport. It’s led to a career which has had incredibly high peaks with proportionately low valleys.

Now, with only about two months left in his wrestling career, Swartwood is trying to put the physical with the mental and finish his career with a bang.

“I’ve taken my bumps in college wrestling, even as recently as last year,” Swartwood said last weekend at the Budd Whitehill National Duals. “But I walked with the coaches and with my family and got right. I have to have the right mindset. That was one of the things we talked about because the ability was there. It’s feeling good this year and hopefully I can keep it rolling through March.”

From the day he stepped on campus as a two-time PIAA Class AAA placewinner at Jersey Shore, Swartwood’s talent has been on display. He won 30 matches and was the Middle Atlantic Conference Rookie of the Year in 2017. He entered the 2018 regional tournament – the NCAA tournament qualifier – as the top-seeded 157-pounder before finishing a disappointing sixth.

He finally broke through a year ago and qualified for the NCAA tournament after finishing third at regionals, but went 0-2 at the national tournament. Swartwood is in the midst of the best season of his career and his full talent was on display during the Whitehill Duals when he went 5-0 with five falls for the Warriors. One of those falls came against Messiah’s Brian Shermeyer who, at the time, was ranked in the top 20 in the country at 174 pounds.

It was the dominant kind of performance Swartwood has always shown he is capable of. But what has been missing from his career is that consistent kind of performance. He’s 22-3 this year and his 13 falls lead the team. Of his three losses, one is to a wrestler in the Top 20 in Division III, and one is to the No. 1-ranked wrestler in the country among junior colleges. And the other came in the finals of the Ohio Northern Invitational to a wrestler who is just above .500 this year.

“It’s about staying positive, really,” Swartwood said. “I know I’ve hit some of the lowest lows for someone with the past that I have. I was never used to it and never had to deal with it in high school. So then you hit the lowest of lows and the only thing you can do is go up. So that’s the way you have to look at it and you figure it out.”

Despite the roller coaster ride his career has been at times, he’s always been a consistent figure in the Lycoming lineup since Crebs recruited him. He’s a four-year starter who enters this weekend’s MAC Championships with a 95-30 career record. With just five more wins, he’ll become only the eighth wrestler in school history to reach 100 career victories.

He’ll be looking for his third consecutive conference title this weekend. After winning his freshman and sophomore seasons, he missed out on winning his third last year when a snowstorm canceled the tournament. When he won his second title in 2018, he became the first Lycoming wrestler to win back-to-back MAC titles since Tommy Snyder won three in a row from 2004-2006.

But Swartwood’s goals go far beyond just reaching 100 wins or taking another conference title. Among the seven wrestlers in school history who have 100 wins already, only Brandon Conrad was never an All-American.

His 5-0 performance at the Whitehill Duals put him back in the national rankings conversation as D3wrestle.com listed him as an honorable mention at 174 pounds. More performances like last weekend could see him climb those rankings and make a move to potentially extend Lycoming’s run of consecutive years with an All-American to six.

“At times he shows the wrestler he can be,” Crebs said. “At one point, he hit a dump for a takedown and I don’t know why. We don’t show it and we tell kids to stay away from it because bad things happen. And he says ‘I know, I know’ when we talk about it. But I try to tell him that obedience wins. Follow the instructions. Guys that aren’t obedient, don’t win.”

“I still have a lot I can improve on. You could see in my last match (last Friday) I got a little sloppy,” Swartwood said. “But those are the little things that when I get in the room I can correct very easily and be sharp so I’m ready for February and March.”