The title is intriguing. Surely, there’s not much that’s sexy about laundry. But “Sexy Laundry,” the first offering this season at Millbrook’s Cabaret, takes on this juxtaposition as its central question. Basically, how can marriage, concerned as it is with the folding of laundry, sustain its fire and passion? The answers aren’t easy. The tinder is hard to light. Sparks fly in unpromising directions. But along the way, this comedy looks closely at our humanity and gives us plenty of chances to laugh out loud at our sometimes misguided, sometimes heroic efforts to connect.

Henry and Alice Lane, middle-aged parents who’ve been married for 15 years, have taken time out to book a room at the prestigious L Hotel, which features bad art and Italian towels the size of wash cloths. The room, like their marriage, disappoints. They have brought with them a copy of “Sex for Dummies,” whose exercises they have gamely promised each other they will attempt. The exercises – which become more hilarious with each new try – ultimately work to reveal the fault-lines in their marriage. They are in a rut (“We used to cook together. Now you chop. And I stir.”). She needs fantasy to feel alive. He’s a practical-mined engineer. They judge, accuse, point fingers. He’s critical of her weight gain. She doesn’t like the way he chews. Perhaps the answer is divorce.

Ironically, it is at this low point, where recovery seems impossible, that the play veers into the unexpected and takes on new, surprising life. There’s a wonderful moment as the partners – all pretense behind them – engage in a full-throated, hostile ‘duet’ (“I’ll show him.” “I’ll show her.”) which seems to release them from their outmoded identities. What follows had the audience, on the night I saw the play, cheering audibly, rooting for this couple whose troubles were now our own. (When Henry orders a bottle of champagne for the room, a member of the audience called out to him to ask for a flower – and sure enough, a flower magically appears on the tray.) Just as Henry is able to get out of his own way and acknowledge Alice’s need for romance and fantasy, so Alice is able to. . . . But I won’t give it away. These last fiery scenes as well as the play’s final tender, moments are worth the price of the ticket.

Michael Maloney and Elizabeth Simmons, both making their debuts at Millbrook this summer, do an excellent job of bringing their characters to life. Maloney, as Henry, begins as a man who is annoyed at having to indulge his wife in what seems to him a fruitless exercise but, as he is goaded by her into reluctant truth-telling, he becomes increasingly intrigued by, and attracted to, her magnetism. Simmons, in her role as Alice, is able to convey the layered sadness and disappointment beneath her original starry-eyed persona. But her character really shines as she puts shame behind her and unapologetically embraces her physicality, setting the play’s little world on fire.

And finally, to director Morgan Sills, who’s returning to Millbrook this year after directing “Wait Until Dark” (2017), “Steel Magnolias” (2016), and “Dial ‘M’ for Murder” (2015): kudos for taking a comedy about two characters in a motel room and eliciting such multi-layered performances. It’s a perfect play for the Cabaret.

Cornhole tournament set for Aug. 15 LOCK HAVEN — A Cornhole Tournament will be held in conjunction with the ... 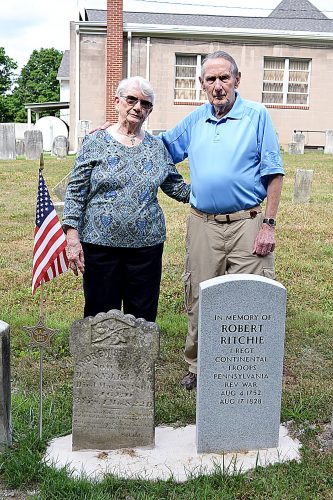 A Revolutionary soldier gets a new resting place

GOOD DAY and Happy Anniversary to Gene and Cathy Conahan. Word of the Day Artist — An artist is a person ...

— The 2020 Keskunhaka Festival has been canceled due to concerns related to COVID-19. The Tompkins Family looks ...

Editor’s Note: If your organization is no longer participating in the food programs listed below, please call The ...