Spreading peace and love around the world 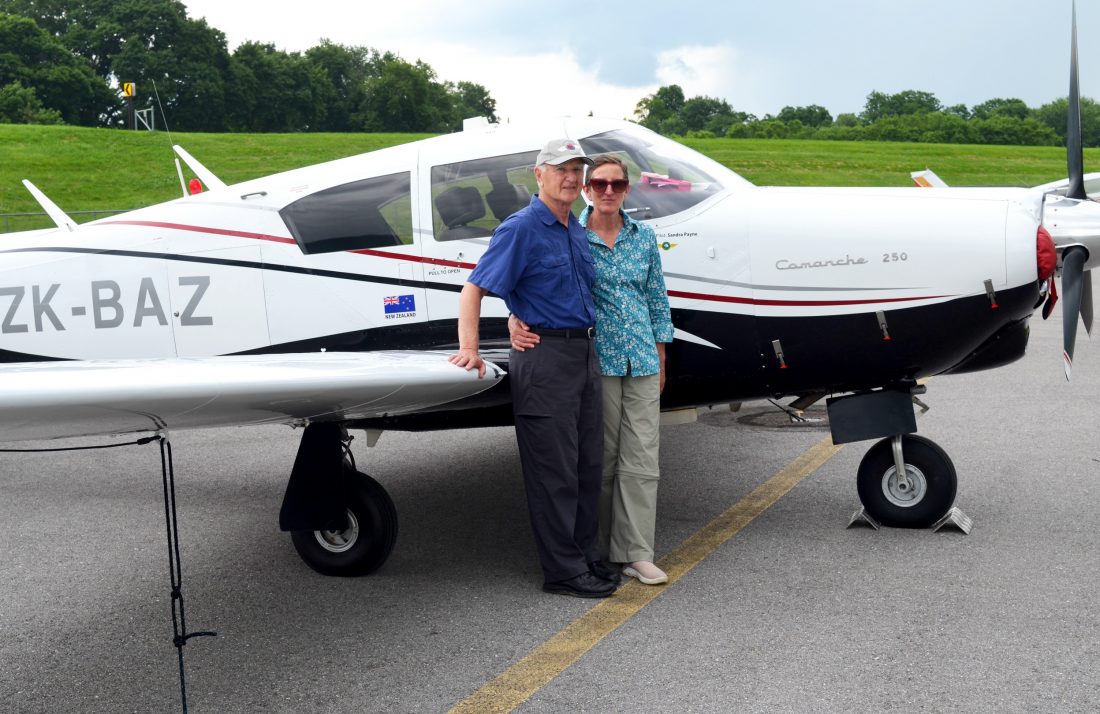 KATHRYN KLINE / THE EXPRESS Pilot Barry Payne and Co-Pilot Sandra Payne, of Taupo, New Zealand, stand in front of their Piper PA-24-250 Comanche at the Sentimental Journey Fly-In – a stop on their flight around the world.

LOCK HAVEN — In their flight around the world, Barry and Sandra Payne, of Taupo, New Zealand, have one clear goal — to spread peace to “people of all walks of life, race and religion.”

Barry and Sandra are flying a Piper PA-24-250 Comanche on their trip, which makes their stop in Lock Haven at the Sentimental Journey Fly-In especially fitting.

“We decided to bring the plane home to where it was built,” Barry said.

The couple is celebrating two anniversaries on their formidable journey — 50 years since they were married and 50 years since Barry obtained his pilot’s license, beginning his aviation career.

In commemoration, the couple is traveling around the world in 50 stops, with their stop in Lock Haven situated about halfway through their six-month journey.

“It’s always been in the back of one’s mind — ‘Wouldn’t that be a cool thing to do?’. And it just so happened that this year was a compelling reason to do it, so here we are,” Barry explained.

The couple has been planning the trip for about a year and made most of their decisions on where to stop during their journey based on where fuel is available and distances that are flyable.

“We were looking at coming to Lock Haven and we discovered through the Internet that there is a once a year event happening about the same time we were due to be in this part of the U.S.,” Barry said. “It just all kind of came together and we wouldn’t want to miss it.”

Barry and Sandra, who both have their pilot’s licenses and function as pilot and co-pilot, respectively, spend much of their time flying around the South Pacific and always knew they wanted to buy a plane when they retired.

They purchased the Piper Comanche specifically because it does well traveling long distances — perfect for a journey like theirs.

Such a journey around-the-world has been done in a small aircraft only 233 times since 1924, according to Barry.

“To an aviator, flying around the world is the equivalent to what climbing Mt. Everest would be like for a mountain climber,” Sandra said.

The stops the couple have made so far in their journey include Australia, Papua New Guinea, Guam, Japan, Russia, Alaska, Canada, and now the U.S. — and according to them, it’s impossible to choose a favorite.

“It’s not the place so much as the people. And we have just met fantastic people everywhere we’ve been. Lock Haven is no exception,” Barry said.

Barry and Sandra say that the experiences they have had stopping in each country so far have been equally “wonderful.”

“People have the same ambitions and same ideals no matter where they live on the planet and what their race is,” Barry said. “That part of it has been so enjoyable for us to see and be part of.”

Barry’s aviation career began in 1963 when he joined the Royal New Zealand Air Force, after which he was trained officially to fly both airplanes and helicopters in 1969, while Sandra obtained her private pilot’s license later on in celebrate of her 60th birthday.

Ever since, the couple have worked well as a pair in life and in flight, having 50 years of marriage to gain the type of communication and cooperation skills that add an additional “safety dimension to the aircraft operation”, they say.

Their hometown of Taupo has a rather small aviation community, according to the couple, and they are right in the heart of it — literally.

Barry and Sandra actually live on an operating municipal airport in the town.

“We live in an apartment on the airport, so we can drive our airplane out of the hangar and onto the runway,” Sandra said. “We’re living our dream.”

With traveling around the world also comes leaving behind friends and family for awhile– an experience that is rather “bittersweet”, according to Sandra.

“We’re really enjoying the journey, but we really miss our family. The good thing is with communications the way they are, we FaceTime our family once or twice a week,” Sandra said. “We’re keeping a blog, and they can follow our tracker there, too.”

The couple, who stay in a variety of accommodations on their long journey, from bed and breakfasts, to hotels, and with family living in various parts of the world, have quite a few more stops on their trip — including New York, Oklahoma, Wisconsin, Greenland, Iceland, England, and Europe.

In light of the tragedy in Christchurch, New Zealand, Sandra and Barry have made it their mission to touch the lives of those they meet in a meaningful and positive way, wherever they go — something they will carry with them to each of their remaining stops.

If you would like more information on Barry and Sandra Payne and their journey around the world, check out their website, www.bazflyer.com, or their blog, www.bazflyer.blogspot.com.