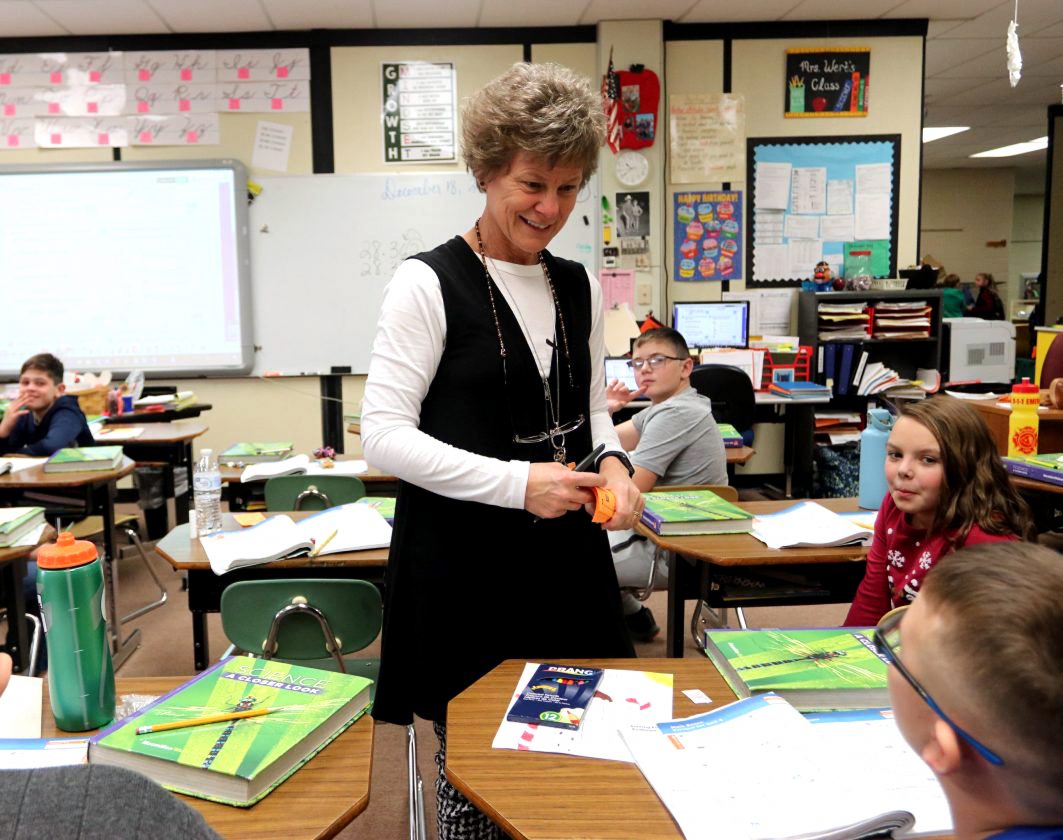 AVIS — When you first meet Gina Wert, a fifth-grade teacher at Avis Elementary, you are struck by her seemingly boundless energy and enthusiasm. Even at the end of a day of teaching, she is excited about her school, profession and most of all her students.

“I’ll tell you what keeps me going. Seeing kids’ success in the classroom,” Wert said. “I see a lot of progress in my classroom and I’m compassionate for kids in general and building that relationship so that they want to be a lifelong learner. I think that’s the biggest thing that keeps me going.”

Wert, who is heading towards retiring from the profession admitted that she didn’t picture herself becoming a teacher as she was growing up.

“I never thought I would be a teacher. I was that shy student in class. I never really participated,” she said.

She noted that when she was in sixth grade she actually had trouble with reading comprehension, which she feels gives her better insight into the problems that students encounter.

“It gives me a good way to relate to these kids. We all have that area where we struggle, but we can be successful,” Wert said. “You have to have that compassion and know that there’s good in every kid.”

Wert, who grew up in Rote, in Lamar Township, attended Mill Hall Elementary School, and did her undergraduate work at Lock Haven University. It wasn’t until her junior year in college that she decided on education as a profession.

“I decided that’s what I need to do, I need to teach,” she shared, adding that it’s been “an amazing career.”

All of her 30 plus years of teaching have been spent in the Jersey Shore Area School District, many of them at Avis Elementary, which has an open concept. She admitted that at first she wasn’t sure that she would like that type of setting, but now is in favor of it.

Avis Elementary is also a small school, which Wert considers like a family. In fact, many of her current students are the children of former students.

Through the years Wert has seen changes in her profession.

“The curriculum has really tightened up, we have more of a pacing. In the past you did what you had to do. It’s very rigorous now,” she said. “We spend a lot of time teaching to the standard today. I don’t know if that’s a negative. It’s just reality.”

She explained that the curriculum and the way teachers approach it has also changed. She cited math instruction as an example.

“We focus on why math is the way it is, and not just on add and subtract or multiply and divide. We do a lot with number sense in math, where before we just memorized,” she said.

Competing with social media for students’ attention is another change Wert has seen during her career.

“As a teacher we compete with social media. A lot of them (the students) when they’re out of here, that’s what they’re waiting to do — social media,” she said. “So to compete with that and hold their attention, it’s demanding.”

Another very positive trend, according to Wert, is that students are now encouraged to take control of their education. Student-led, student-driven education is an important part of the education process.

“We try to get kids to take control of their education,” Wert explained. “They have data folders, they look at their data, they kind of own their PSSA’s. They set goals, look at where they’re at, they set goals, reasonable goals and they’re involved in their conferences. This is a big change.”

Wert said that by setting their own goals students are taking ownership of what is expected of them.

“We have their last PSSA scores — you have to get them to own that. That’s the only way kids are going to work hard is by setting the expectations high and getting them to own it,” she said. “Those kids are only going to work to what you expect of them. If you only expect this, that’s what you’ll get.”

“That’s the part of my job that I love, the presenting and the teaching, seeing kids succeed,” she said. “My goal is to try to get kids to be lifelong learners, to take the things and strategies that I teach them and try to get them see how it relates to life in general.”

Wert also encourages her students to learn how to maintain a healthy lifestyle.

An avid trail runner, Wert said that she challenged her class to walk a mile a day from Thanksgiving through New Year’s Day. Noting that she does not force her students to participate, most have and are eager to get outside and move. In fact, when the weather was recently too wet to go outside, her students did 28 laps in the gym to meet their goal.

She also advocates for brain breaks, which she said “good teachers do these anyhow.”

“Kids can only sit as long as their age. These kids need a break. These kids work hard for me,” she noted.

“I’m goal-oriented and I expect a lot. I’m tough, but I don’t think that’s a bad thing,” she added.

When she retires, as in her teaching career, Wert doesn’t expect to just sit still.

She has a huge trail family, the PA Trail Dogs, and is looking forward to more trail runs. She is also eager to spend time with her parents.

Although she has not set a timetable for leaving teaching, she stressed that she wanted to go before she doesn’t feel positive about her career.

“I don’t want to leave education on a bad note. I want to remember the good things about it,” she said. “I will miss the relationships the most.”