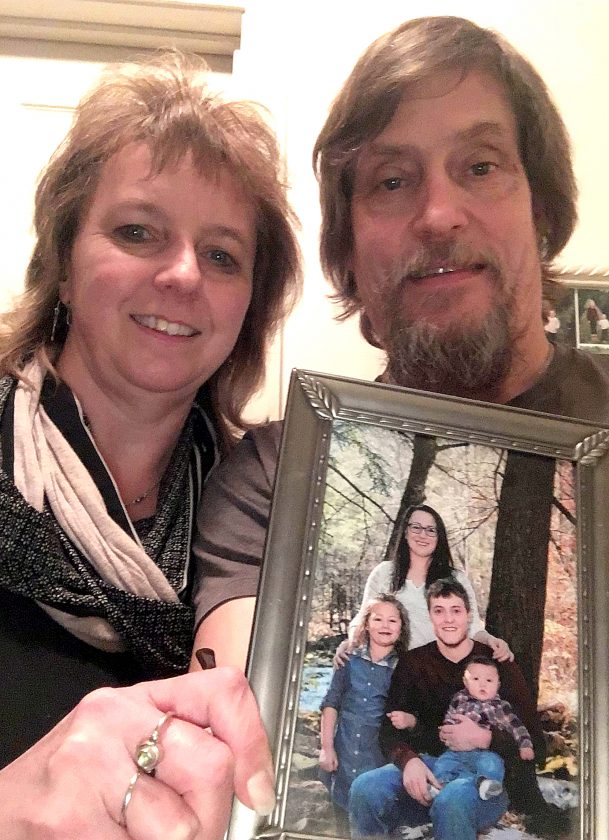 PHOTO PROVIDED Lori and Lyle Oechler hold a photo of their late son Brian with his wife Olivia, and their two children Rylee and Brett.

RAUCHTOWN — Traditionally on Feb. 14 The Express publishes the expected love story between a married couple for our Valentine’s Day edition, but this year, we have a different tale to tell.

This is the story of a mother’s love that knows no bounds, and stretches beyond anything that we can touch or see. Yet, it is strong, and sturdy, and cannot be bent nor burnt.

To understand fully, we have to travel back in time to 1990, when Lyle and Lori Oechler of Rauchtown were expecting their second child, a son, who they would name “Brian.” 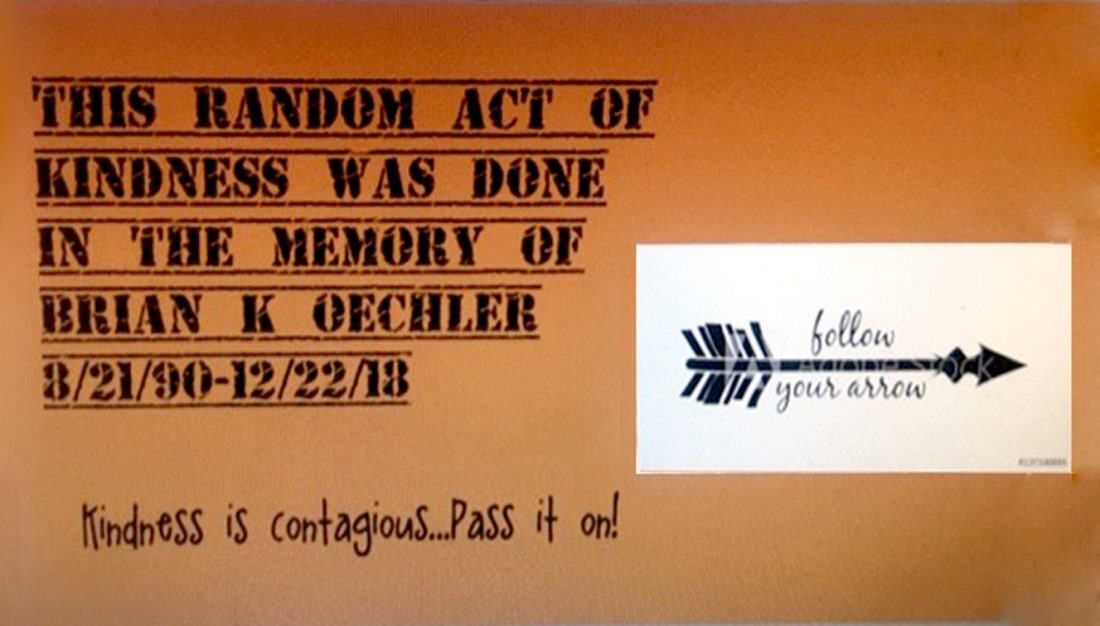 AMBER MORRIS / THE EXPRESS Lori hands out these Random Act of Kindness cards on important days that she wants to honor her son Brian.

Lori remembers the day she got the news that she was going to be a mother once again.

According to his parents Brian was a typical all-American country boy. He loved playing outside and being on the local little league baseball team. At age 12 he developed a passion for the outdoors and hunting, and could be found in the woods alongside of his Dad during each hunting season, enjoying not only the hunt, but also respecting nature and taking in the scenery.

When Brian turned 16 he went to work and got his first job at Pizza Hut in Mill Hall where his co-workers and customers alike were taken in by his movie star smile and kind blue eyes.

While working and going to high school Brian decided to take guitar lessons and became a talented musician and singer, who was known to sing for his family and friends, and post the occasional humble Facebook video of himself, slightly out of frame, singing to the camera.

Shortly before he graduated from Jersey Shore High School in 2008, Brian would come face to face with his dream-girl at a local fundraising event.

“Everything seemed to happen early in Brian’s life,” explained Lori. “He met his wife Olivia just after his 18th birthday – he had gone to the Smoked Country Jam Music Festival which was held in Loganton at that time and met Olivia there. They dated for a year, and the next year at the same festival, he got up on stage and proposed to her. We were all so happy for them,” she said with a smile.

“They married in July of 2010, moved into a house in Loganton, and had their beautiful daughter Rylee. Five years later their handsome son Brett followed.”

Lyle and Lori both agree that Brian was a great husband and father who loved his family more than anything. “He was so good at being a dad. He was so natural at it,” said Lyle.

Brian’s life wasn’t always perfect, even though he would disagree.

For years Brian was sick, but it wasn’t the occasional common cold or allergies, and his parents knew that something was not right.

“He had severe flu-like symptoms on and off, and we were sure that it was consistent with Lymes Disease,” said Lori. “You see, Lyle was diagnosed in 2012 with it, so we were kind of experts.”

His parent’s fears were right – Brian was tested for Lymes, and the results came back as positive.

Lymes Disease, also known as “borrelliosis,” in its advanced form comes with a multitude of symptoms and side effects, and Brian was burdened with so many headaches, joint pains, sudden rashes, and other complications, that his sickness almost became a part of his normal life. He tried to rise above it, even though his illness was so evident to those around him.

Lori explained the trials that her son endured. “Everyone could see how he struggled with the pain and fatigue from the disease, but he always pushed on and continued to suffer through college and after,” she said. “Through it all, he graduated from Lock Haven University with a degree in Geology, and he never stopped his life. He still worked, and played with his kids, and was an honest, good person. He would still help a stranger or a friend if they were in need no matter what his personal issues were.”

In December of 2018, the young Oechlers like most area families were preparing for Christmas, but also for another special milestone – Lori’s birthday.

Lori took a deep breath and softly explained how the happy day would unfold into the worst moment of their lives.

“Friday, Dec. 21 was my birthday, and at around 7:15 in the evening we heard the unmistakable sound of Brian’s truck coming up our lane,” she recalled. “He had taken the kids Christmas shopping and was there to drop off my birthday present. I’ll never forget it. He handed me a bouquet of pink and white carnations and a box of my favorite candy. The visit lasted all of five minutes, it began with a hug and ended with a hug, and Brian saying ‘Happy birthday, I love youuuuu.’ Brian always drew out the last word.”

“After he left I put the flowers in some water, and messaged him on Facebook saying that I had put them in my favorite vase. He replied back ‘thank Rylee, she picked them out.’ And that is the last conversation I would ever have with my son.”

“The next morning, Saturday Dec. 22, three days before Christmas, Brian had gone to the emergency room around 4 a.m. with abdominal pain, and didn’t think he needed anyone there with him, since it seemed to be yet another thing to deal with regarding the Lymes. In his mind, he’d get checked out and treated and come home. “

“However, Brian had a rare reaction to the medicine he was given, and it caused his heart to stop, and that was it. Our kind, smart, loving, selfless, beautiful boy was gone, and our lives were all left numb with no understanding of what had just happened.”

At only 28 years old, Brian Oechler, the happy guy that was known for lifting the spirits of others in hard times, the young husband, the father to Rylee and Brett, the son and son-in-law, the brother to Amanda – would be laid to rest on Dec. 29, 2018, with a memorial at his old high school.

His passing left behind a tremendous void in Jersey Shore, Rauchtown, and Sugar Valley, not to mention on Facebook, where many people looked forward to his inspiring posts, photography, and music.

“One of the greatest gifts he left for us are the random songs that pop up on Facebook memories,” Lori said with a smile. “We can hear him, and see him, It’s like he is tapping me on the shoulder and saying ‘hey mom…I’m still here.’

And because Lori, and the rest of the family, is determined for Brian’s love to remain among us, Lori has taken to the streets and local stores, to do good in Brian’s memory.

She began by printing up business sized cards explaining that the holder is a recipient of a random act of kindness in Brian’s name, with a simple message that says “kindness is contagious, follow your arrow.” On milestones, or holidays, on his birthday, and even the first day of archery season, Lori handed out the cards with some kind of small token of love.

Donuts, gift cards, cash, and even a load of pumpkins for a retirement home, were some of the items that were randomly gifted, with Lori’s only request being that they pay it forward in Brian’s name.

“I want Brian’s memory to live on, and this seemed to be the best way to help with that and help others at the same time,” said Lori.

“The first morning we did this, we felt good about it, but didn’t think we would hear back from people about what they did with their gift, she said. “Later that day one of the young ladies that I handed a card to, shared their Random Act of Kindness to Facebook, and then others began doing the same thing and started posting their’s too.”

“Some acts were unbelievable, like the couple from Carroll who payed for the licenses of an entire class of hunters from the safety course at the sporting goods store in Jersey Shore. Other acts were as simple as letting someone cross the street when it wasn’t their turn. Each one made the world a better place, and that’s what our goal is.”

On the one year anniversary of Brian’s death Lori secretly placed an envelope with $5 on each family’s bulletin at their church, along with a letter explaining that they should use it to honor Brian’s memory. As the weeks passed by, she started to learn how far the money went. Some bought a friend coffee. One married couple used their’s to purchase three books for the library, and one of the $5 bills even made it to Jerusalem.

Giving back in her son’s honor feels so good that Lori has decided to take it a step further.

“I find that by doing my Random Acts of Kindness it helps to fill the hole that Brian left in my heart, therefore we are in the process of saving up to start a non-profit. That way we can continue to share the love and light with others,” she stated.

Lori’s dream is that one day the organization might be taken over by Rylee and Brett, so that Brian’s legacy can grow and help thousands of people in need.

The non-profit outdoor group, Hooks ‘N Triggers, held a squirrel hunt in Brian’s memory at the beginning of February. While the Oechlers were at the event they were approached by two separate donors who gave them money toward the non-profit paperwork fee.

“Amanda will be filing for non-profit status as soon as we raise the entire amount,” added Lori.

Lori says that she can not bring Brian back, but she can continue to honor and remember him in new ways that keep his light burning brightly, and with Valentines Day upon us, she encourages the public to be on the lookout for her.

“I know without a doubt if Brian thought his passing made us stop living he would be crushed,” she remarked. “So instead of letting the incredible loss hold us down and make us stop living, I feel that he would be incredibly proud that we are keeping him alive through spreading happiness.”

They say there is no greater love than the one between a mother and her son, and Lori Oechler proves this to be true.