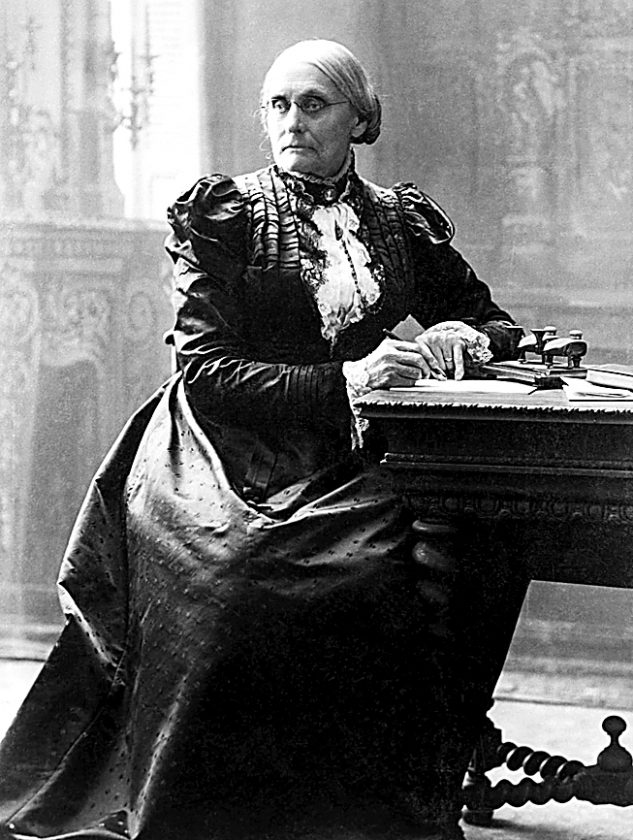 PHOTO PROVIDED Susan B. Anthony writing at a desk.

Editor’s Note: This is another in a series of articles on women’s suffrage. The articles will be published in The Express throughout the coming year, leading up to the 100th anniversary of women’s suffrage in the United States on August 26, 2020.

Known as one of the founding mothers of the U. S. Women’s Suffrage Movement, Susan B. Anthony — after decades of devoting herself single-mindedly to the cause of women’s rights — became the equivalent of a modern day rock star.

In celebration of her 80th birthday, President William McKinley invited her to the White House, thereby officially acknowledging her hard-won influence. For 45 years she had delivered between 75 and 100 speeches a year, and now, toward the end of her life, a loyal and enthusiaastic following welcomed her every appearance with thunderous applause and standing ovations. Her ever-present red shawl had become a symbol of the movement itself, and when — at one appearance– she strode to the platform without it, the reporters present at the event signaled their disapproval by putting down their pencils. 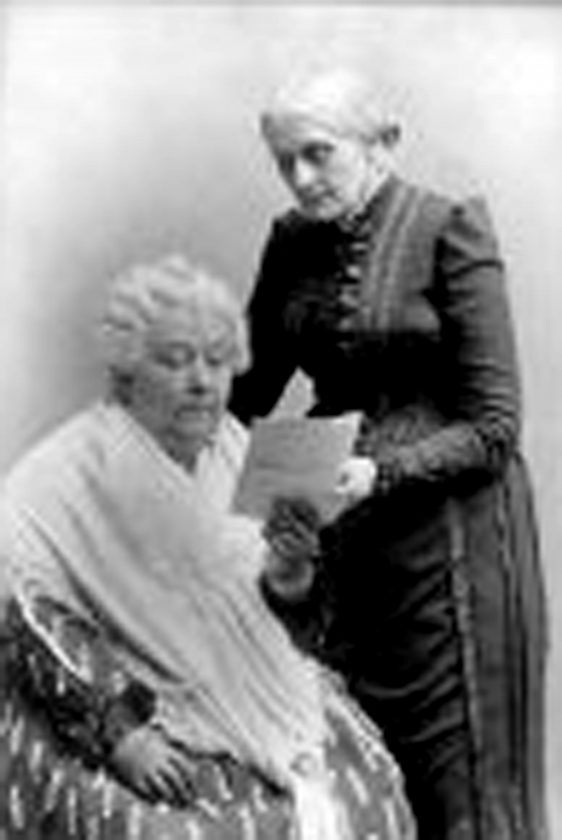 “Boys, what’s the matter?” she called out to them.

“No red shawl, no report,” one called back.

Susan sent her niece back to her hotel for the shawl, and when it was placed around her shoulders, the audience burst into applause, and the reporters picked up their pencils once again. “Aunt Susan” had been given permission by her adoring fans to deliver yet another stirring speech.

She was not, however, always the object of such adulation.

Born Susan Anthony in 1820 — according to some accounts, she added the “B” later due to “a great craze for middle initials” — she was inspired early on to follow her “inner light” through the influence of her Quaker father, who was both an abolitionist and a temperance advocate. The values embodied by her father, including the importance of hard work and discipline, of education, of compassion for the disadvantaged, would stay with her all her life. At the same time, it made a great impression on Susan that her mother, who was pretty, fun-loving, and popular, with a spectacular singing voice, had put “sinful” amusements behind her in order to marry into a Quaker household. This gave Susan an early and personal example of the sacrifices that marriage required of her generation’s women. At the same time, though women were not allowed to speak at public forums, she was inspired by the example of her grandmother and her aunts, who were able to preach in Quaker Meeting as the spirit moved them and who modeled for Susan the way an impassioned, heart-felt delivery by a woman could have a profound effect on an audience.

Early exposure to the Quaker activists who gathered at her family ‘s farm inspired Susan to pursue social reform; she became involved first in the Daughters of Temperance where – believing in the responsibility to work, and speak, to eradicate the “evils of drunkenness” – she delivered her first public speech. Later, attempting to speak to a motion at a Sons of Temperance convention where she was a delegate, she was told, “The sisters were not invited here to speak, but to listen and to learn.” Chastised for speaking out because they were women, the delegates became incensed and left the meeting, declaring that they would call a meeting of their own that very night. Out of this, the Women’s State Temperance Society was born, with Susan recognized as the leader of women’s temperance groups in the state. When she attempted, on behalf of the society, to bring a temperance bill before the legislature, she realized that women’s efforts would be largely ineffective unless they were able to vote.

In her later years, Susan commented on the strength it took to combat the ridicule leveled at women who dared to speak openly in public: “No advanced step taken by women has been so bitterly contested as that of speaking in public. For nothing which they have attempted, not even to secure the suffrage, have they been so abused, condemned and antagonized.”

When she was 31, Susan met Elizabeth Cady Stanton and began a collaboration that would endure the rest of her life and make a lasting mark on the American landscape. They recognized in each other immediately the shared commitments that would keep them working in partnership for more than 50 years to advance the cause of women’s rights. Elizabeth and her husband moved frequently, and in every one of their homes a room was reserved for “Aunt Thusan,” who would rock the babies and stir the puddings while Elizabeth closed the door to the quiet back room behind her, momentarily relieved of the care of her (seven) children so that she could concentrate and write. Their skills and talents were complementary. While “Mrs. Stanton” — as Susan always called her – wrote their speeches, Susan organized and carried out the groundwork. Elizabeth said of their partnership, “I forged the thunderbolts, she fired them.”

As her work evolved Susan realized that, even though women did not have the vote, they could use the only power available to them, the power of the petition, to make their voices heard. She had gained invaluable experience criss-crossing New York State collecting signatures, enduring harsh conditions, staying in dreary hotels where she had to pick the bedbugs out of her petticoats, and facing indifference (often on the part of other women) and sometimes open hostility. As she became better known, mobs armed with knives and pistols broke up the meetings, and she was pelted with rotten eggs and burned in effigy in the streets. Nevertheless, she understood that fighting for justice was her life’s work, and she would not be deterred.

By the time of the Civil War, Susan had accrued a long history of abolitionist protest along with her work on women’s rights. She had organized anti-slavery meetings , helped slaves to freedom in the Underground Railroad, advocated for “Unconditional Emancipation” as an agent for the American Anti-Slavery Society, and refused to support any political party that supported slavery. Midway through the Civil War, she and Elizabeth began a campaign to advocate for an amendment to the U.S. Constitution that would end slavery. If petitions had been successful in the past, they could also make possible the Thirteenth Amendment. Ratified in 1865 in the aftermath of the Civil War, the Thirteenth Amendment abolished slavery in the United States. The 400,000 signatures that Susan had collected on her petitions contributed significantly to that victory.

Women’s contributions to the Civil War and their support for the Thirteenth Amendment had been so great that Susan and Elizabeth were certain women would be given suffrage as a reward. Both favored equal rights for all — women and blacks– and they were eager to see a new constitutional amendment proclaiming universal suffrage. It soon became clear, however, that the most prominent male thinkers and politicians of the day were willing to use their clout to push suffrage only for black men. The women’s continued insistence on sufrage for all began to take its toll. They lost abolitionist support, and the suffrage movement itself fractured into two camps, with Susan and Elizabeth declaring, sometimes in distastefully racist terms, that women’s suffrage should take precedence. When the Fourteenth Amendment, which wrote discrimination against women into the Constitution for the first time, was ratified in 1868, followed by the Fifteenth in 1870, Susan turned her deep disillusionment into renewed action.

In addition to speaking at an endless number of state suffrage campaigns, organizing national conventions, and lobbying both state and federal legislators, as well as launching a newspaper called The Revolution, Susan joined the lecture circuit. She traveled back and forth across the country from mid-autumn to spring, often by stagecoach and train, covering distances unmatched by any other reformer. At one point, she was forced to survive on dried fish and crackers when her train was snow-bound for days. She lived frugally, using most of her lecture fees to support the suffrage organizations she represented. Her commitment to her principles and her refusal to profit financially from her work began earning her increased admiration and respect. By the time she emerged as a national leader – something previously unheard of for a woman in American history – the country was beginning to take women’s suffrage seriously.

In 1872, as election day approached, Susan decided to test the assurances of the Fourteenth Amendment that “No state . . . shall abridge the privileges . . . of citizens of the United States.” Since she was assuredly a citizen, one of the privileges afforded her was, she reasoned, the right to vote. On November 5th, she appeared at her precinct and, after using her powers of persuasion to convince the registrars of her rights, cast her ballot. Two weeks later she was arrested for voting illegally, and a trial date was set for the next May. To win public support for her case, Susan used the intervening months to lecture about her arrest and pending trial, and she made sure to bring her story to each and every district in the county in which her trial would take place. The judge at the trial, however, refused to allow the jury to determine Susan’s sentence, instead insisting they deliver a verdict of guilty. Constantly interrupting her and insisting she sit down, the judge was nevertheless treated to a ringing diatribe that permeated every corner of the courtroom. Susan refused to pay her fine of $100 and ended by declaring that she would “earnestly and persistently continue to urge all women to the practical recognition of the old revolutionary maxim that ‘Resistance to tyranny is obedience to God.'”

In her later years, Susan began thinking about her legacy. In spite of her declaration that “I love to make history but hate to write it,” she spent several years recording, with Elizabeth, the events of the movement, in what would become a six-volume work of over 5700 pages called The History of Woman Suffrage, the final volumes only completed after her death. In 1883, she traveled to Europe where she and Elizabeth met with representatives of European women’s groups and worked to create an international women’s organization, known as the International Council of Women (still active today and associated with the UN).

Physically active into her seventies, Susan continued traveling and lecturing, sometimes delivering as many as three speeches per day. But probably her most lasting legacy was her work on what she hoped would become the Sixteenth Amendment to the Constitution, a draft of which was delivered to the Senate in 1878. It read: “The right of citizens of the United States to vote shall not be denied or abridged by the United States or by any State on account of sex.” It took another 42 years before this wording was adopted as our Nineteenth Amendment. Susan herself was not alive to see it, having died in 1906, but this addition to our Constitution would hereafter be known affectionately as the Susan B. Anthony Amendment.

“We shall someday be heeded, and when we shall have our amendment to the Constitution of the United States, everybody will think it was always so, just exactly as many young people think that all the privileges, all the freedom, all the enjoyments which woman now possesses always were hers. They have no idea of how every single inch of ground that she stands upon today has been gained by the hard work of some little handful of women of the past.