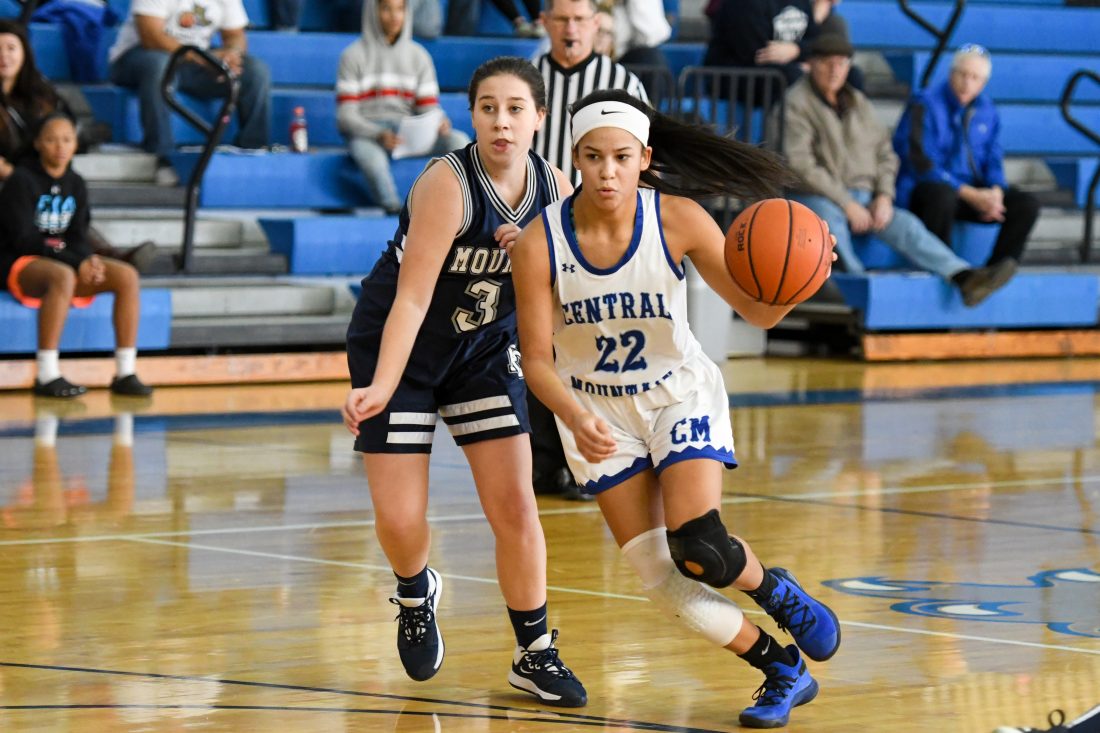 MILL HALL – What an opening game.

The Central Mountain girls basketball team made an early statement in its first game of the year as they blew past Philipsburg-Osceola Saturday afternoon, 65-19.

Leading the way was Quinlynn McCann who posted a 34-point effort while teammates Kiahna Jones and Avery Baker both finished with 10.

The Mounties finished with an 8-point effort by Samantha Bainey.

Teammate Lindsey Bordas was next with five points.

“I won’t lie, our preseason has been really up and down. We’ve really battled injuries. We haven’t had a full squad really since the first week. So we’ve had lineups in and out and I was really concerned coming in,” said Central Mountain coach Scott Baker. “I was happy with the intensity level. Our guards rebounded fairly well and we do have a little size there this year and that’s nice. They are young and they are willing to get better.”

In the first half, the Mounties played tough early on as the game started out as a back and forth battle.

After a quick layup by McCann, P-O battled right back on a jumper by Bordas.

McCann, who was tough for the Mountie guards to handle, put her team back ahead on a steal and a bucket, 4-2.

Philipsburg took the lead thanks to a triple by Bainey at 6:38.

After a turnover by Central Mountain, Bainey put her team up 6-4, hitting 1-of-2 from the charity stripe.

But the lead wouldn’t last long as McCann tied things at six with a simple lay in.

On the following possession, the Mounties went ahead once again as Kyleigh Kennedy hit 2-of-2 from the foul line giving them an 8-6 advantage.

However, the Wildcats started to heat up offensively outscoring PO 9-0 the rest of the way in the quarter, leading 15-8 as the teams went into the second period.

McCann has the hot hand, finishing with an 8-point first period.

The Wildcats defense clamped down in the second while its offense heated up.

After a bucket by the Mounties Camden Potter, Central Mountain’s Alyssa Fisher opened the period hitting two points and Baker posted another triple upping the home team’s lead to 19-10.

The rest of the first half belonged to the Wildcats as it sizzled offensively with an 8-0 run, taking an impressive 34-11 lead.

Things didn’t fare much better for Philipsburg in the second half as the Wildcats outscored P-O 19-5 in the third.

Leading the scoring for Central Mountain was McCann with a 10-point effort.

Central Mountain finished the game as intense as it started by outscoring Philipsburg-Osceola 12-3 with McCann leading all scorers in the period as well en route to the 44-point victory.

Penn State All-American Micah Parsons is opting out of the 2020 season because of concerns about COVID-19. The ...